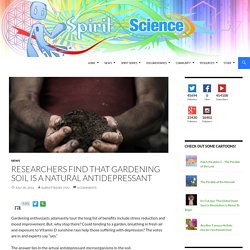 But, why stop there? Could tending to a garden, breathing in fresh air and exposure to Vitamin D sunshine rays help those suffering with depression? Bird Egg Identification Charts.

National Weather Service Advanced Hydrologic Prediction Service. Cave-digging artist finds inspiration underground. Best Times. 29 Surreal Places In America You Need To Visit Before You DieBored Daddy. Gorilla Reunion: Damian Aspinall's Extraordinary Gorilla Encounter on Gorilla School. Sidewalk art. 16 Flowers That Look Unbelievably Similar To Something Else. When we first came across these pictures, we thought they had to be photoshopped. 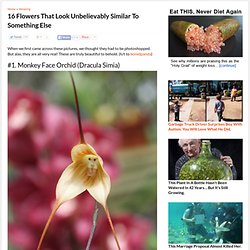 16 Flowers That Look Unbelievably Similar To Something Else. VIDEO: Black bear saves cub from oncoming traffic. Those darn cubs: you take your eyes off them for a second and they're playing chicken with traffic! 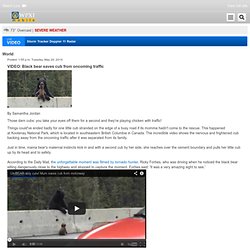 This is What it Sounds Like When You Put Tree Rings on a Record Player. Seen On: RealFarmacy This is an excerpt from the record Years, created by Bartholomäus Traubeck, which features seven recordings from different Austrian trees including Oak, Maple, Walnut, and Beech. 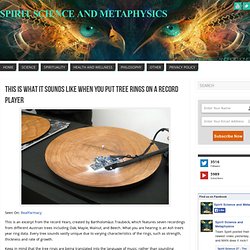 What you are hearing is an Ash tree’s year ring data. Every tree sounds vastly unique due to varying characteristics of the rings, such as strength, thickness and rate of growth. Keep in mind that the tree rings are being translated into the language of music, rather than sounding musical in and of themselves. Traubeck’s one-of-a-kind record player uses a PlayStation Eye Camera and a stepper motor attached to its control arm. Hats off to Traubeck for coming up with the ingenious method to turn a simple slice of wood into a beautiful unique arraignment. 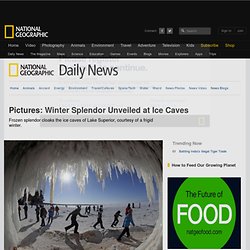 The caves ring the cliffs of the Apostle Islands National Lakeshore on Lake Superior, which is now 94 percent iced over. "Make sure to bundle up and dress in layers," the park recommends to visitors. "Personal sled dog trips can be made to the caves. Commercial sled dog trips are not allowed," the park notes, and horses are forbidden as well. Frozen Footsteps to Ice Caves This is not your typical beach trip. Cave visitors take a cold walk of three miles or more over the ice to explore cliffside sea caves draped in the mantle of winter. Look Out, Above! Watch out where you walk in the ice caves. The caves formed from the action of lake waves on ancient sandstone cliffs that ring the park. Goats Play On Metal Sheet. Gold-Winning Olympians to Get Bonus Meteorite Medals. A 3-D simulation of the Chelyabinsk airburst created on Sandia National Laboratories’ Red Sky supercomputer. 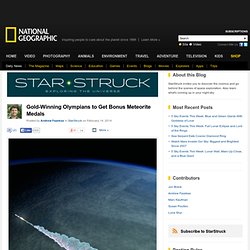 Credit: Andrea Carvey, Mark Boslough, and Brad Carvey Winning an Olympic medal this weekend will make for a truly out-of-this-world experience. That’s because ten lucky athletes who earn gold at the Sochi Olympics on February 15 will also receive a bonus medal decorated with a piece of the giant meteor that smacked into the Olympics host country, Russia, exactly one year ago. UPDATE Feb.16: The International Olympic Committee nixed the plans for handing out the special meteorite medallions during the medal ceremonies on Saturday. It appears the IOC has very stringent rules regarding how these presentations are carried out and that no items, other than the official awards, may be presented.

What Animals Can Teach Us About Being Better Human Beings. Our animal counterparts have quite a few lessons to offer (the value of napping, for one). 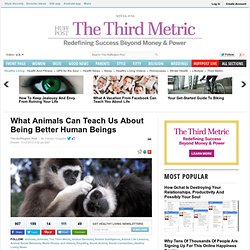 Humans are fundamentally social animals, and in learning to coexist more peacefully, the animal kingdom could teach us a thing or two. Research has shown that animals are capable of great depth of emotion and complex systems of social cooperation, and we know that animals can care for each other and for human beings. "Science has discovered a lot about the inner lives of diverse species, more than we often give ourselves credit for," Marc Bekoff, author of The Emotional Lives Of Animals, wrote in a Greater Good blog post. "Indeed, animals’ lives aren’t all that private, hidden, or secret; a flurry of research has offered insight into the emotional lives of animals. Polar Bear Picture. Ice Skating On A Lake Perfectly Frozen Like Glass Is Snowy Serenity.

'Timestack' Photos Collapse Entire Sunsets Into Single, Mesmerizing Images. Usually to experience a sunset in its entirety, one must devote a couple of hours to watching the majestic motion of the sky as the sun floats downward until it's completely out of view. 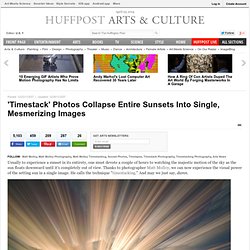 Thanks to photographer Matt Molloy, we can now experience the visual power of the setting sun in a single image. He calls the technique "timestacking. " Welcome To The World Of Live Animal Cameras, Baby Eagles! The Coolest Music in the World: Listen to Siberian Ice Drummers Use Frozen Lake Baikal as an Incredible Musical Instrument. WQData LIVE.