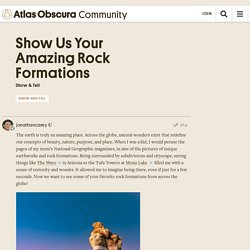 The Bondi-to-Coogee walk in Sydney was the absolute highlight of my short visit to Australia, just an impressive feature of nature. The bays of suburban Wellington, New Zealand have a lot of impressive rocks as well, specially for the colors. I remember rust-red and black cliffs from my time there. Unfortunately, I missed the near-spherical Moeraki Boulders though. All in all, I’d say nothing shapes a good rock like the Pacific, and that brings me to my favorites. I wrote a still-unpublished entry on the “Possible Dream” Scenic Walkway in Puerto and it still holds a special place in my heart, 5. Clear Lake. Hunga Tonga-Hunga Ha'apai.

Timeline of human evolution. Chronological outline of major events in the development of the human species Haeckel's Paleontological Tree of Vertebrates (c. 1879). 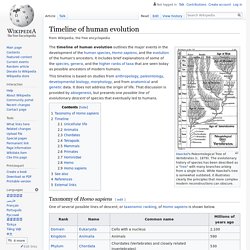 The evolutionary history of species has been described as a "tree" with many branches arising from a single trunk. While Haeckel's tree is somewhat outdated, it illustrates clearly the principles that more complex modern reconstructions can obscure. LIVE - Nautilus Deep Sea Dive to Hydrothermal Vent w/Hercules. OrcaSound – Listen for whales. A Nearly Perfect Rectangular Iceberg Spotted in the Antarctic. Mysterious fairy circles in Namibian desert explained at last. Jen Guyton By Sam Wong The Namib desert is covered with regular patterns of bare circles whose origin is fiercely debated by researchers – but it now seems both leading explanations may be right. 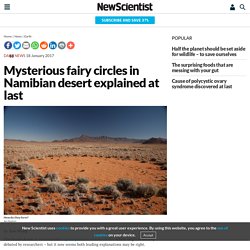 One camp claims the empty patches, known as fairy circles, are created by termites under the soil that clear vegetation in the area around their nests. By making the soil porous, the argument goes, they establish permanent reservoirs of rainwater 50 centimetres below the surface, which sustains them and the surrounding ecosystem. An alternative idea is that the circles are explained by plants competing for water. The water competition theory can explain the regular patterns neatly, but hasn’t been proven in any test, says Corina Tarnita of Princeton University. “Each one was bringing what we thought were convincing arguments,” she says.

Termite nests So Tarnita and her colleague Rob Pringle turned to computer models. Termites forage in a circular area around their nest. What is bioluminescence and how is it used by humans and in nature? The sea was luminous in specks and in the wake of the vessel, of a uniform slightly milky colour. 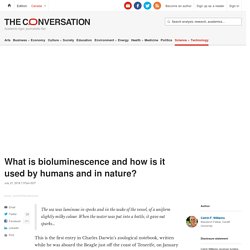 When the water was put into a bottle, it gave out sparks… This is the first entry in Charles Darwin’s zoological notebook, written while he was aboard the Beagle just off the coast of Tenerife, on January 6, 1832. What Darwin saw was bioluminescent sea creatures, flickering light in response to physical disruption. Bioluminescence, the production and emission of light by living organisms, became a sticking point for Darwin. He struggled to explain why this phenomenon appeared in separate species in a seemingly random fashion. Darwin was not the first to note bioluminescence. More than 75% of deep-sea creatures are estimated to produce their own light. The nocturnal Hawaiian bobtail squid – Euprymna scolopes – which lives in shallow waters, also has a symbiotic relationship with a bioluminescent bacterium, Aliivibrio fischeri.

Bioluminescence and humans It has had a protective role too. To avoid humans, more wildlife now work the night shift. For their first 100 million years on planet Earth, our mammal ancestors relied on the cover of darkness to escape their dinosaur predators and competitors. 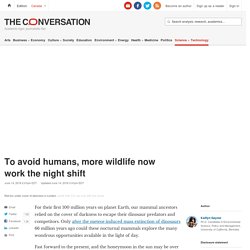 Only after the meteor-induced mass extinction of dinosaurs 66 million years ago could these nocturnal mammals explore the many wondrous opportunities available in the light of day. Fast forward to the present, and the honeymoon in the sun may be over for mammals. They’re increasingly returning to the protection of night to avoid the Earth’s current terrifying super-predator: Homo sapiens. My colleagues and I have made the first effort to measure the global effects of human disturbance on the daily activity patterns of wildlife. In our new study in the journal Science, we documented a powerful and widespread process by which mammals alter their behavior alongside people: Human disturbance is creating a more nocturnal natural world.

Triona McGrath: How pollution is changing the ocean's chemistry. Rachel Sussman: The world's oldest living things. Anthropocene began in 1965, according to signs left in the world’s ‘loneliest tree’ On Campbell Island in the Southern Ocean, some 400 miles south of New Zealand, is a single Sitka spruce. 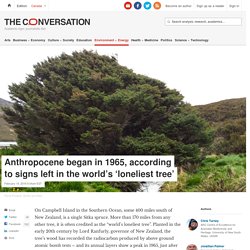 More than 170 miles from any other tree, it is often credited as the “world’s loneliest tree”. Morning Glory - Cloud Phenomenon. Greg Gage: Electrical experiments with plants that count and communicate. Saihō-ji (Kyoto) Metamorphosis The Science of Change. St Kilda - National Trust for Scotland World Heritage Site. Glass Beach – Nature Corrects Another of Our Mistakes. No one would have believed in the last years of the nineteenth century that a rubbish dump being created would, in the space of a century, become a protected area. 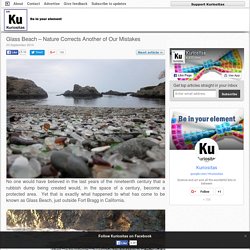 Yet that is exactly what happened to what has come to be known as Glass Beach, just outside Fort Bragg in California. Monty Roberts Join Up, Man Who Listens to Horses, Real Horse Whisperer, Books, Biography, Train, Demonstrations, Flag is Up. Why the Bomb Cyclone Hitting the East Coast Is So Unusual. Transient: An Extraordinary Short Film That Captures Lightning at 1,000 Frames per Second. Oldest Evidence of Life on Earth Possibly Found in Australian Rocks. Ancient rocks found in a remote stretch of Western Australia may contain the world's oldest known evidence of life on land, a new study finds. 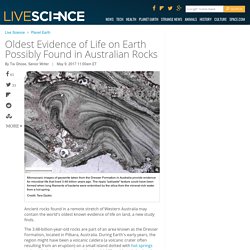 The 3.48-billion-year-old rocks are part of an area known as the Dresser Formation, located in Pilbara, Australia. During Earth's early years, the region might have been a volcanic caldera (a volcanic crater often resulting from an eruption) on a small island dotted with hot springs and ponds that were teeming with microbial life, said study lead author Tara Djokic, a doctoral candidate in geosciences at the University of New South Wales in Australia. Djokic and her colleagues found signs of microbial life embedded in rocks that form around hot springs, as well as in deposits in the ancient hot springs themselves. Error loading player: No playable sources found The findings hint that early life may have gotten its start in hot springs on land, as opposed to deep inside ocean hydrothermal vents, as is commonly believed, Djokic told Live Science. 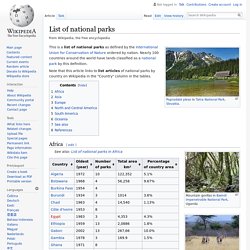 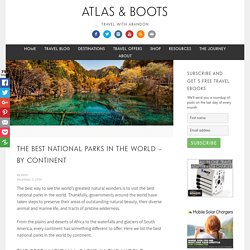 Thankfully, governments around the world have taken steps to preserve their areas of outstanding natural beauty, their diverse animal and marine life, and tracts of pristine wilderness. From the plains and deserts of Africa to the waterfalls and glaciers of South America, every continent has something different to offer. BBC Radio 4 - Shared Planet, Half and Half. BBC Radio 4 - Shared Earth - Archive.