Growing pains: The oldest trees on Earth ripped themselves apart, fossils show. Scientists have discovered 374-million-year-old tree fossils from the dawn of Earth’s forests — and found that these strange plants literally had to rip themselves apart as they grew. 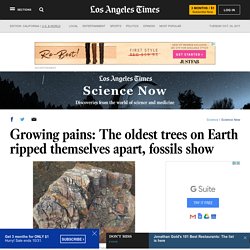 The fossils, described in the Proceedings of the National Academy of Sciences, shed light on the nature of ancient forests and the evolution of the Earth’s climate. 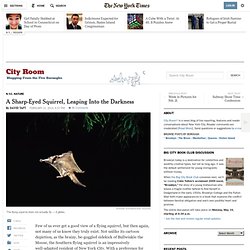 Photography of nature. Bees. Animal behavior. Patterns in music and the natural world: Creating stronger spider silk and other new materials. Intraspecies Virus a Possible Colony Collapse Culprit — NOVA Next. For the $14 billion agricultural industry, honeybees are a linchpin. 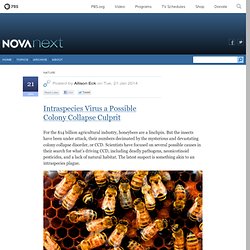 But the insects have been under attack, their numbers decimated by the mysterious and devastating colony collapse disorder, or CCD. Scientists have focused on several possible causes in their search for what’s driving CCD, including deadly pathogens, neonicotinoid pesticides, and a lack of natural habitat. The latest suspect is something akin to an intraspecies plague. A plant virus might be contributing to colony collapse disorder in honeybees. Recently, the U.S. Geoffrey Mohan, reporting for the Los Angeles Times: [F]urther study revealed the RNA virus was replicating inside its Apis mellifera hosts and spreading to mites that travel from bee to bee, according to the study published online Tuesday in the journal mBio.The discovery is the first report of honeybees becoming infected by a pollen-born RNA virus that spread systematically through the bees and hives.

Space. Bayer is suing *Europe* for saving the bees. Wow. 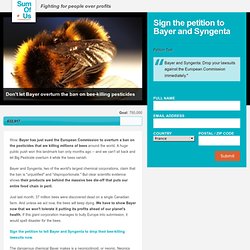 In Canada's Alberta province, oil sands boom is a two-edged sword. FORT CHIPEWYAN, Canada — In the Cree language, the word "athabasca" means "a place where grass is everywhere. 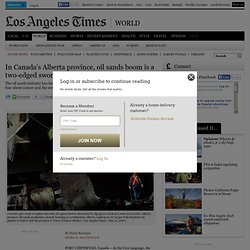 " Here in Alberta, the Athabasca River slices through forests of spruce and birch before spilling into a vast freshwater delta and Lake Athabasca. But 100 miles upstream, the boreal forest has been peeled back by enormous strip mines, where massive shovels pick up 100 tons of earth at a time and dump it into yellow trucks as big as houses. Beeing There: The Search for Pesticides’ Effect on Declining Bee Colonies Moves to the Fields.

A honeybee's brain is hardly bigger than the tip of a dog's whisker, yet you can train a bee just as Pavlov got his pups to drool on hearing their dinner bell. 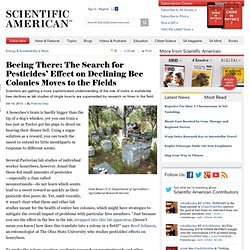 Using a sugar solution as a reward, you can teach the insect to extend its little mouthparts in response to different scents. Several Pavlovian lab studies of individual worker honeybees, however, found that those fed small amounts of pesticides—especially a class called neonicotinoids—do not learn which scents lead to a sweet reward as quickly as their pesticide-free peers do. Yet, until recently, it wasn't clear what these and other lab studies meant for the health of entire bee colonies, which might have strategies to mitigate the overall impact of problems with particular hive members.

"Just because you see the effect in the bee in the lab, strapped into this lab apparatus, [doesn’t mean you know] how does this translate into a colony in a field? " What do we know? What's next for research? OurAmazingPlanet. Letter from the Archive: John McPhee on the Control of Nature. Interactive Map Color-Codes Race of Every Single American. It sounds somewhat implausible, but a University of Virginia academic has designed an interactive map that color-codes the geographic distribution of every single American, drawing on the last census. 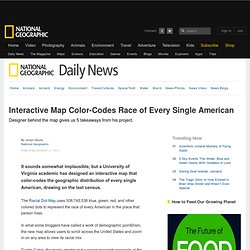 The Racial Dot Map uses 308,745,538 blue, green, red, and other colored dots to represent the race of every American in the place that person lives. In what some bloggers have called a work of demographic pointillism, the new map allows users to scroll across the United States and zoom in on any area to view its racial mix. Sudden appearance of a large number of modern animal groups studied. Arctic sea ice delusions strike the Mail on Sunday and Telegraph. When it comes to climate science reporting, the Mail on Sunday and Telegraph are only reliable in the sense that you can rely on them to usually get the science wrong. 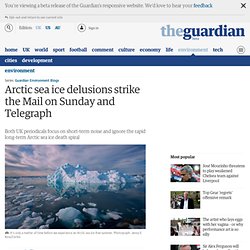 This weekend's Arctic sea ice articles from David Rose of the Mail and Hayley Dixon at the Telegraph unfortunately fit that pattern. Both articles claimed that Arctic sea ice extent grew 60 percent in August 2013 as compared to August 2012. While this factoid may be technically true (though the 60 percent figure appears to be an exaggeration), it's also largely irrelevant. For one thing, the annual Arctic sea ice minimum occurs in September – we're not there yet. And while this year's minimum extent will certainly be higher than last year's, that's not the least bit surprising.

"Around 80% of the ~100 scientists at the Bjerknes [Arctic climate science] conference thought that there would be MORE Arctic sea-ice in 2013, compared to 2012. " Regression toward the Mean When Will the Arctic be Ice-Free? Continuing Global Warming. University - Tropical forest carbon absorption may hinge on an odd couple. Posted September 15, 2013; 01:00 p.m. by Morgan Kelly, Office of Communications A unique housing arrangement between a specific group of tree species and a carbo-loading bacteria may determine how well tropical forests can absorb carbon dioxide from the atmosphere, according to a Princeton University-based study. 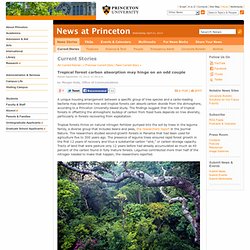 The findings suggest that the role of tropical forests in offsetting the atmospheric buildup of carbon from fossil fuels depends on tree diversity, particularly in forests recovering from exploitation. Tropical forests thrive on natural nitrogen fertilizer pumped into the soil by trees in the legume family, a diverse group that includes beans and peas, the researchers report in the journal Nature. Insect. Bee. Bees are flying insects closely related to wasps and ants, and are known for their role in pollination and for producing honey and beeswax. 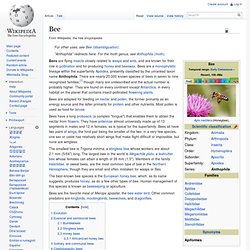 Bees are a monophyletic lineage within the superfamily Apoidea, presently classified by the unranked taxon name Anthophila. There are nearly 20,000 known species of bees in seven to nine recognized families,[1] though many are undescribed and the actual number is probably higher. They are found on every continent except Antarctica, in every habitat on the planet that contains insect-pollinated flowering plants. The smallest bee is Trigona minima, a stingless bee whose workers are about 2.1 mm (5/64") long. Citizen Scientists Gather Data on Urban Bees.

Around the world, bees are dying in unprecedented numbers. While scientists hypothesize pesticides and habitat loss are to blame, the exact causes are still unclear. Gardeners and farmers are concerned about the fate of their bee-pollinated food and looking to the scientific community for information about how and why the bee populations are declining.

Unfortunately, money is tight as scientists struggle to gain the funding and resources for extensive bee studies. Marie Clifford and Susan Waters, graduate researchers at the University of Washington in Seattle, have found a way to get around scarce research funding: citizen scientists. The Urban Pollination Project (UPP), co-founded in 2011, takes Seattle community gardeners and trains them to collect data on local bees. “Citizen science,” Clifford says, “allows scientists to address much broader scale questions than they might be able to address themselves.” Related Category: Biodiversity, Biology, Blog, Environment, Food, Sustainable Food. Bumblebee. A bumblebee is any member of the bee genus Bombus, in the family Apidae. There are over 250 known species,[1] existing primarily in the Northern Hemisphere although they also occur in South America.

They have been introduced to New Zealand and the Australian state of Tasmania. Bumblebees are social insects that are characterised by black and yellow body hairs, often in bands. Short-haired bumblebee nests in Dungeness. 16 September 2013Last updated at 21:57 ET. Insect leg cogs a first in animal kingdom.