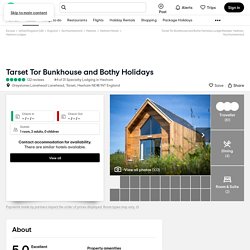 Nearby attractions include Ferny Rigg Alpacas (3.5 miles), Bellingham Heritage Centre (3.4 miles), and Black Middens Bastle House (2.9 miles). What are some of the property amenities at Tarset Tor Bunkhouse and Bothy Holidays? Some of the more popular amenities offered include free wifi, free parking, and a sauna. MetaTrader 5 for Brokers. The MetaTrader 5 multi-asset institutional platform is a perfect solution for starting up a brokerage or expanding existing business operations. 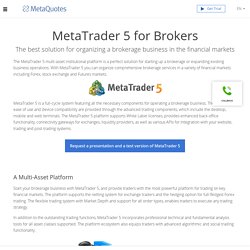 With MetaTrader 5 you can organize comprehensive brokerage services in a variety of financial markets including Forex, stock exchange and Futures markets. MetaTrader 5 is a full-cycle system featuring all the necessary components for operating a brokerage business. The flexibility, ease of use and device compatibility are provided through the advanced trading components, which include the desktop, mobile and web terminals. The MetaTrader 5 platform supports White Label licenses, provides enhanced back-office functionality, connectivity gateways for exchanges, liquidity providers, as well as various APIs for integration with your website, trading and post-trading systems. 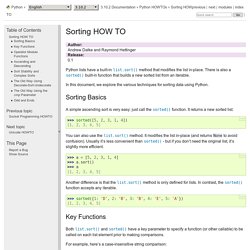 There is also a sorted() built-in function that builds a new sorted list from an iterable. In this document, we explore the various techniques for sorting data using Python. Sorting Basics A simple ascending sort is very easy: just call the sorted() function. Automate the Boring Stuff with Python. Excel is a popular and powerful spreadsheet application for Windows. 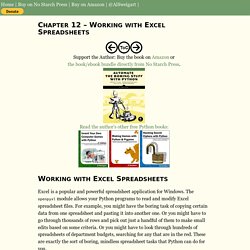 The openpyxl module allows your Python programs to read and modify Excel spreadsheet files. For example, you might have the boring task of copying certain data from one spreadsheet and pasting it into another one. Or you might have to go through thousands of rows and pick out just a handful of them to make small edits based on some criteria. Automate Excel using Python. Automate Excel using Python. Python File seek() Method. Description Python file method seek() sets the file's current position at the offset. 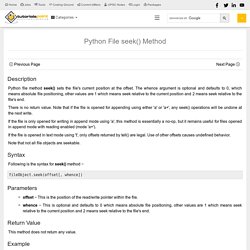 The whence argument is optional and defaults to 0, which means absolute file positioning, other values are 1 which means seek relative to the current position and 2 means seek relative to the file's end. There is no return value. Note that if the file is opened for appending using either 'a' or 'a+', any seek() operations will be undone at the next write. If the file is only opened for writing in append mode using 'a', this method is essentially a no-op, but it remains useful for files opened in append mode with reading enabled (mode 'a+').

If the file is opened in text mode using 't', only offsets returned by tell() are legal. Note that not all file objects are seekable. Syntax. Lonelyenvoy/python-memoization: A powerful caching library for Python, with TTL support and multiple algorithm options. Primer on Python Decorators. In this tutorial on decorators, we’ll look at what they are and how to create and use them. 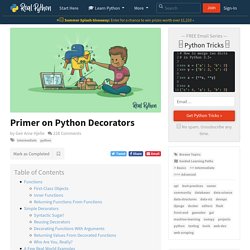 Decorators provide a simple syntax for calling higher-order functions. By definition, a decorator is a function that takes another function and extends the behavior of the latter function without explicitly modifying it. This sounds confusing, but it’s really not, especially after you’ve seen a few examples of how decorators work. You can find all the examples from this article here. Functions Before you can understand decorators, you must first understand how functions work. >>> def add_one(number):... return number + 1 >>> add_one(2)3. Primer on Python Decorators.

Data Science With Python Core Skills - (full course, free) Reading and Writing Files in Python - better than paying for for Netflix. Python Learning Paths - Best Ive seen. Good recursive function. Self referential. Now seek tabulation. Python has a decorator function called cache from functools which memoises the inputs. Dynamic programming is breaking down a problem into smaller sub-problems, solving each sub-problem and storing the solutions to each of these sub-problems in an array (or similar data structure) so each sub-problem is only calculated once. 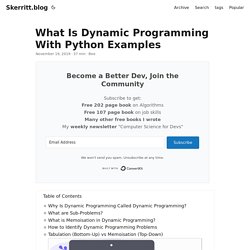 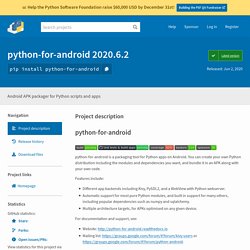 You can create your own Python distribution including the modules and dependencies you want, and bundle it in an APK along with your own code. Features include: Different app backends including Kivy, PySDL2, and a WebView with Python webserver.Automatic support for most pure Python modules, and built in support for many others, including popular dependencies such as numpy and sqlalchemy.Multiple architecture targets, for APKs optimised on any given device. Statistics: combinations in Python. 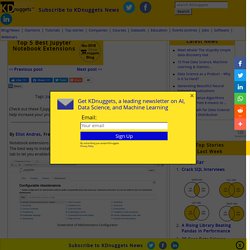 The best way to install them is to use Jupyter NbExtensions Configurator. It will add a tab to let you enable/disable extensions: Screenshot of NbExtensions Configurator Installation. Tqdm. Tqdm derives from the Arabic word taqaddum (تقدّم) which can mean “progress,” and is an abbreviation for “I love you so much” in Spanish (te quiero demasiado). 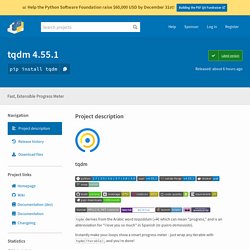 Instantly make your loops show a smart progress meter - just wrap any iterable with tqdm(iterable), and you’re done! Trange(N) can be also used as a convenient shortcut for tqdm(range(N)). Overhead is low – about 60ns per iteration (80ns with tqdm.gui), and is unit tested against performance regression. By comparison, the well-established ProgressBar has an 800ns/iter overhead. In addition to its low overhead, tqdm uses smart algorithms to predict the remaining time and to skip unnecessary iteration displays, which allows for a negligible overhead in most cases. tqdm works on any platform (Linux, Windows, Mac, FreeBSD, NetBSD, Solaris/SunOS), in any console or in a GUI, and is also friendly with IPython/Jupyter notebooks. How I built a spreadsheet app with Python to make data science easier. @ricklamersRick Lamers Co-Founder of Orchest.

Improving data science tools one commit at a time. Today I'm open sourcing "Grid studio", a web-based spreadsheet application with full integration of the Python programming language. About a year ago I started tinkering with the idea of building the data science IDE that I had always wanted. Python - Reading xlsx file using jupyter notebook. Python - Reading xlsx file using jupyter notebook. Interactive spreadsheets in Jupyter. A spreadsheet is an interactive tool for data analysis in a tabular form. It consists of cells and cell ranges.

It supports value dependent cell formatting/styling and one can apply mathematical functions on cells and perform chained computations. It is the perfect user interface for statistical and financial operations. The Jupyter Notebook was lacking a spreadsheet library, that’s when ipysheet comes into play. ipysheet is a new interactive widgets library that aims at implementing the core features of a good spreadsheet application and more.

There are two main widgets in ipysheet, the Cell widget, and the Sheet widget. The cell value can be a boolean, a numerical value, a string, a date, and of course another widget! Jupyter-widgets/ipywidgets: Interactive Widgets for the Jupyter Notebook. Jupyter Notebook increase csv cache size. Anaconda package lists — Anaconda documentation. Python Cheatsheet - Python Cheatsheet. The Zen of Python From the PEP 20 -- The Zen of Python: Long time Pythoneer Tim Peters succinctly channels the BDFL's guiding principles for Python's design into 20 aphorisms, only 19 of which have been written down. import this The Zen of Python, by Tim Peters Beautiful is better than ugly.

Explicit is better than implicit. Simple is better than complex. Basics of Jupyter Notebook and Python. In this article by Cyrille Rossant, coming from his book, Learning IPython for Interactive Computing and Data Visualization – Second Edition, we will see how to use IPython console, Jupyter Notebook, and we will go through the basics of Python. Originally, IPython provided an enhanced command-line console to run Python code interactively. The Jupyter Notebook is a more recent and more sophisticated alternative to the console. Today, both tools are available, and we recommend that you learn to use both.

The first chapter of the book, Chapter 1, Getting Started with IPython, contains all installation instructions. The main step is to download and install the free Anaconda distribution at (the version of Python 3 64-bit for your operating system). Launching the IPython console To run the IPython console, type ipython in an OS terminal. IPython console. Basics of Jupyter Notebook and Python. 2. Built-in Functions — Python 3.4.10 documentation. Open file and return a corresponding file object. If the file cannot be opened, an OSError is raised. file is either a string or bytes object giving the pathname (absolute or relative to the current working directory) of the file to be opened or an integer file descriptor of the file to be wrapped.

(If a file descriptor is given, it is closed when the returned I/O object is closed, unless closefd is set to False.) mode is an optional string that specifies the mode in which the file is opened. It defaults to 'r' which means open for reading in text mode. The default mode is 'r' (open for reading text, synonym of 'rt'). Jupyter and Python Scripting. In this article by Dan Toomey, author of the book Learning Jupyter, we will see data access in Jupyter with Python and the effect of pandas on Jupyter.

Ipythonblocks. 10 Reasons to Switch to JupyterLab. Top 50 Ultimate Python Modules List 2020. Graphical Interface The Python Standard Library comes with TkInter, but you can take your GUIs to the next level using an external Python module. wxPython: Create truly native user interfaces for their Python applications that run with little or no modifications on Windows, Mac and Linux or other Unix-like systems. PyGObject: Python package which provides bindings for GObject based libraries such as GTK, GStreamer, WebKitGTK, GLib, GIO, and many more. Fourier Transforms (scipy.fft) — SciPy v1.6.0 Reference Guide. 1-D discrete Fourier transforms The FFT y[k] of length of the length- sequence x[n] is defined as.

Vlookup is essentially used for vertically arranged data. Vlookup is an operation used to merge 2 different data tables based on some condition where there must be at least 1 common attribute(column) between the two tables. After performing this operation we get a table consisting of all the data from both the tables for which the data is matched. We can use merge() function to perform Vlookup in pandas.

The merge function does the same job as the Join in SQL We can perform the merge operation with respect to table 1 or table 2.There can be different ways of merging the 2 tables. CSV Files in Python - Learn Python Programming (Computer Science) Python Classes and Objects. Simulate Mouse Events In Python - Nitratine. This demonstrates how to control the mouse with Python. Using pynput we are able to simulate mouse events into any window. This will show you how to press buttons, scroll and move the mouse. PyAuto Double Left Click to location.

Mouse Control Functions — PyAutoGUI documentation. The Screen and Mouse Position¶ Locations on your screen are referred to by X and Y Cartesian coordinates. The X coordinate starts at 0 on the left side and increases going right. Unlike in mathematics, the Y coordinate starts at 0 on the top and increases going down. Cheat Sheet — PyAutoGUI documentation. This is a quickstart reference to using PyAutoGUI. Hoffstadt/DearPyGui: Dear PyGui: A fast and powerful Graphical User Interface for Python with minimal dependencies. How to Update a Python Dictionary? - AskPython. How to Iterate Through a Dictionary in Python. APC2. A Random Walk & Monte Carlo Simulation. APC. Learn Python Programming. SOCRATICA - 10/10 tutorial. Futuristic, tongue in cheek; lifts you through the drudge. Learn Python Programming with Socratica (Computer Science) CSV Files in Python - Learn Python Programming (Computer Science)

How to iterate over each row of python dataframe. Python - How to iterate over rows in a DataFrame in Pandas. A Beginner’s Guide to Optimizing Pandas Code for Speed. Pandas APPLY function. Passes data through a function into a filtered table. List comprehensions are for loops that create lists. Recommended for Pandas. Python - How do I get the row count of a pandas DataFrame?