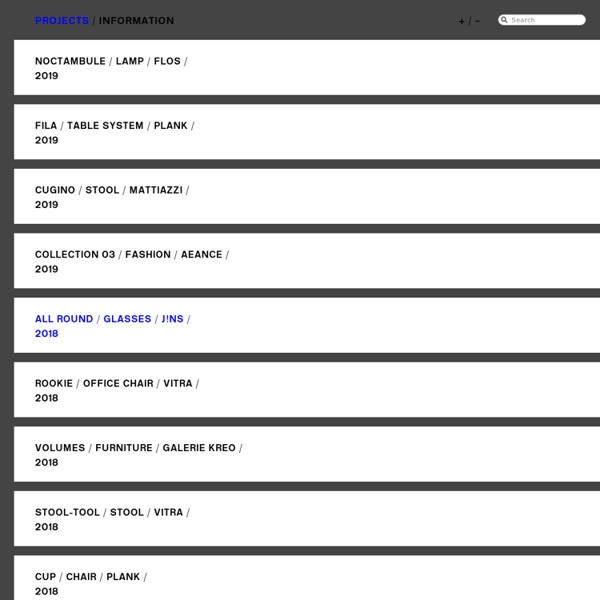 CHAMPIONS is a collection of lacquered tables we produced for Galerie Kreo in Paris. The tables are made of aluminum (extrusions and folded sheet) with tops in float glass. PODIFY, the largest table, measures 3.5m in length. The graphics applied on the tables are fictional. They have no meaning other than to create an illusion which outgrows the objective reality of the product. Obviously, the tables are inspired by sport equipment like bikes, skis, and racecars.

Bureau Bruneau Self-initiated typography experiment where I used an old train set, found in my grandmother's basement as the basis for creating letters. Contemporary European Architecture: Terminal Hoenheim Nord - Zaha Hadid To help fight against the congestion and pollution in the city, Strasbourg developed a new tram-line service that encourages people to leave their cars outside the city and take a tram to the more inner parts of the city. Hadid designed the tram-station and a car park for 700 cars. Her main idea was to create an attractive space with energy that is clearly defined in terms of function and circulation. Hadid did this by using 3D graphics of light and openings.

Little Paper Planes The work of Los Angeles bases, Lisa Williamson. She was part of Made in L.A. at the Hammer Museum last year. Working in several different mediums—sculpture, painting, drawing, video, and publications—Lisa Williamson (b. 1977 Champaign-Urbana, Illinois) creates works that are conceptually dense yet embrace a minimal and refined visual language as well as a lighthearted humor. Trafficking in the potential for abstract forms to conjure recognizable everyday objects, from architectural details to the human body, her works are placed in precise relationship to one another to suggest a setting where actions have occurred. Her use of language—in her cleverly ambiguous titles and in the writings that she occasionally publishes—and the diagrams visualized within her drawings serve to animate the sculptures.