British Brexit robbery: how democracy was hijacked in UK & US 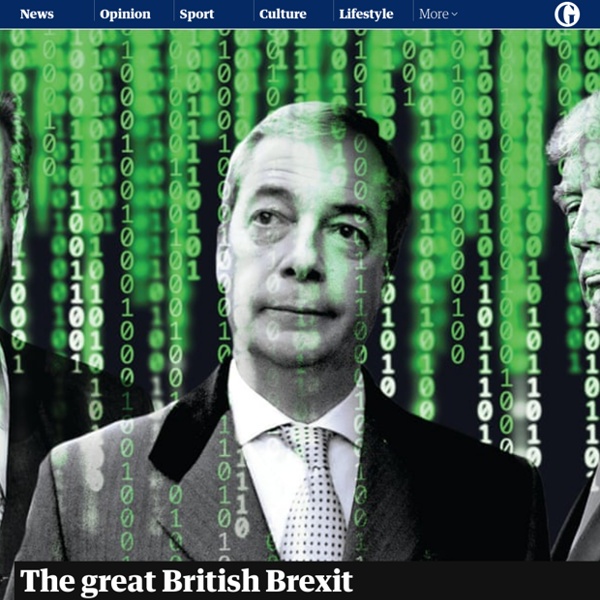 “The connectivity that is the heart of globalisation can be exploited by states with hostile intent to further their aims.[…] The risks at stake are profound and represent a fundamental threat to our sovereignty.” Alex Younger, head of MI6, December, 2016 “It’s not MI6’s job to warn of internal threats. It was a very strange speech. Was it one branch of the intelligence services sending a shot across the bows of another? Or was it pointed at Theresa May’s government? In January 2013, a young American postgraduate was passing through London when she was called up by the boss of a firm where she’d previously interned. “That was before we became this dark, dystopian data company that gave the world Trump,” a former Cambridge Analytica employee who I’ll call Paul tells me. Was that really what you called it, I ask him. Why would anyone want to intern with a psychological warfare firm, I ask him. A weird but telling detail. There are three strands to this story. Who’s Chris Wylie?

Yes, indoor air pollution kills more than HIV/AIDS, malaria, TB Emphasizing the need to bring clean fuel to the world’s poor, James Rockall, CEO of the World LPG Association, recently said that "more (people) die of indoor air pollution than malaria, HIV/AIDS and tuberculosis combined." Rockall’s statement showed up in a tweet from Stanford Energy, a research group at Stanford University, after he spoke there May 9. Rockall confirmed that he did make this claim, and we decided to check it out. Public health researchers have known for some time that in many poorer nations, fumes from dirty cooking stoves pose a health threat. Rockall’s group represents the interests of the liquified petroleum gas industry, but that self-interest aside, there’s no question that gas burns more cleanly than wood or coal. Rockall told us he got his numbers from the World Health Organization.

By firing James Comey, Trump is continuing the work Putin started A brazen attack on the rule of law. There is no other way to describe Donald Trump’s firing of FBI director James Comey. Recalling the dismissal of Watergate special prosecutor Archibald Cox, Democratic senator Bob Casey of Pennsylvania rightly called the act “Nixonian”. But it is more than that. Russia’s criminal interference in our presidential election represents one of the great scandals in our history. How the Trump-Russia Data Machine Games Google to Fool Americans A year ago I was part of a digital marketing team at a tech company. We were maybe the fifth largest company in our particular industry, which was drones. But we knew how to game Google, and our site was maxed out. We did our research and geared the content for the major keywords that we knew people used most frequently when they were shopping for drones or researching drones or looking for drone video. We knew our audience: their buying habits, their interests, ages, geography, etc., and soon our Google results were up there with a company that was literally an order of magnitude bigger than we were.

Guardian - 11 Dec 2015 - Ted Cruz campaign using firm that harvested data on millions of unwitting Facebook users - by Harry Davies @harryfoxdavies Ted Cruz’s presidential campaign is using psychological data based on research spanning tens of millions of Facebook users, harvested largely without their permission, to boost his surging White House run and gain an edge over Donald Trump and other Republican rivals, the Guardian can reveal. A little-known data company, now embedded within Cruz’s campaign and indirectly financed by his primary billionaire benefactor, paid researchers at Cambridge University to gather detailed psychological profiles about the US electorate using a massive pool of mainly unwitting US Facebook users built with an online survey. As part of an aggressive new voter-targeting operation, Cambridge Analytica – financially supported by reclusive hedge fund magnate and leading Republican donor Robert Mercer – is now using so-called “psychographic profiles” of US citizens in order to help win Cruz votes, despite earlier concerns and red flags from potential survey-takers. Research that seeded data on millions

How Facebook flouts Holocaust denial laws except where it fears being sued Facebook’s policies on Holocaust denial will come under fresh scrutiny following the leak of documents that show moderators are being told not to remove this content in most of the countries where it is illegal. The files explain that moderators should take down Holocaust denial material in only four of the 14 countries where it is outlawed, if reported. One document says the company “does not welcome local law that stands as an obstacle to an open and connected world” and will only consider blocking or hiding Holocaust denial messages and photographs if “we face the risk of getting blocked in a country or a legal risk”.

About 1999.io How is 1999.io different fromother blogging platforms? 1999.io is easy for writers to get started with, is completely customizable by designers, and can be extended by programmers through easy APIs and full access to the server code. Create a new post in two steps. Enter text into the box, then click the Post button. Other blogging software can be hard to navigate for writers who want to quickly record an idea and get back to what they're working on. Guardian - Revealed: 50 million Facebook profiles harvested for Cambridge Analytica in major data breach The data analytics firm that worked with Donald Trump’s election team and the winning Brexit campaign harvested millions of Facebook profiles of US voters, in one of the tech giant’s biggest ever data breaches, and used them to build a powerful software program to predict and influence choices at the ballot box. A whistleblower has revealed to the Observer how Cambridge Analytica – a company owned by the hedge fund billionaire Robert Mercer, and headed at the time by Trump’s key adviser Steve Bannon – used personal information taken without authorisation in early 2014 to build a system that could profile individual US voters, in order to target them with personalised political advertisements. Christopher Wylie, who worked with a Cambridge University academic to obtain the data, told the Observer: “We exploited Facebook to harvest millions of people’s profiles.

How Facebook allows users to post footage of children being bullied Facebook has only recently banned users from posting photos and images mocking people for having illnesses and other serious health conditions, the Guardian can reveal. The company said the policy had changed in recent months but declined to give details. Facebook responded after the Guardian presented it with examples from leaked internal documents advising moderators to ignore certain images mocking people with disabilities. The manuals included photos of people with Down’s syndrome. The company said these images were “not allowed” and would now be taken down. This is what emboldened white supremacists look like It was a scene out of the darkest days of the civil rights movement. A couple of dozen white supremacists rallied around a statue of Robert E Lee, a Confederate army general, in Virginia, carrying torches and chanting: “You will not replace us.” But this was no black-and-white newsreel, relaying the horrors of a time long since past.

New DataBasic Tool Lets You “Connect the Dots” in Data Catherine D'Ignazio and I have launched a new DataBasic tool and activity, Connect the Dots, aimed at helping students and educators see how their data is connected with a visual network diagram. By showing the relationships between things, networks are useful for finding answers that aren’t readily apparent through spreadsheet data alone. To that end, we’ve built Connect the Dots to help teach how analyzing the connections between the “dots” in data is a fundamentally different approach to understanding it. The new tool gives users a network diagram to reveal links as well as a high level report about what the network looks like.

The myth that British data scientists won the election for Trump Claims that social media data won the presidency are greatly exaggerated A piece of data science mythology has been floating around the internet for several weeks now. It surfaced most recently in Vice, and it tells the story of a firm, Cambridge Analytica, that was supposedly instrumental in Donald Trump’s campaign.