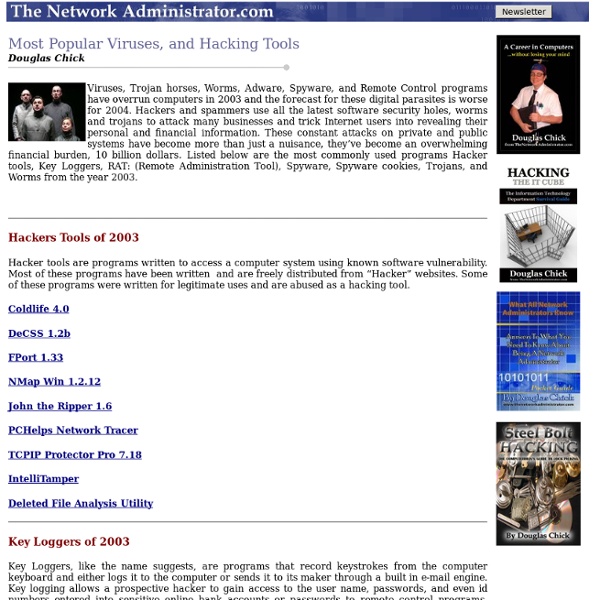 A history of hacking A history of hacking Hacking has been around for more than a century. In the 1870s, several teenagers were flung off the country's brand new phone system by enraged authorities. Here's a peek at how busy hackers have been in the past 35 years. Early 1960s Chapter 1. Hacker Slang and Hacker Culture This document is a collection of slang terms used by various subcultures of computer hackers. Though some technical material is included for background and flavor, it is not a technical dictionary; what we describe here is the language hackers use among themselves for fun, social communication, and technical debate. The ‘hacker culture’ is actually a loosely networked collection of subcultures that is nevertheless conscious of some important shared experiences, shared roots, and shared values.

100+ awesome free and open source applications - Software - Seopher.com Posted on Tuesday 27th of September 2011 at 13:05 in SoftwareIt has always amazed me quite how many incredible, varied and useful applications are available for free on the Internet. Be it free, open source, web-based or merely passive trials - the number of top quality items on offer is huge. The purpose of this list is to help people realise that the free and open source software communities are expansive and generous. In these tense economic times, raising awareness of such projects is something I'm more than happy to do. If you feel that I've missed something good off the list, please leave a comment at the bottom - I read absolutely every one. Image, Image Editing and Graphics

Linux Directory Structure (File System Structure) Explained with Examples by Ramesh Natarajan on September 8, 2010 Have you wondered why certain programs are located under /bin, or /sbin, or /usr/bin, or /usr/sbin? For example, less command is located under /usr/bin directory. Why not /bin, or /sbin, or /usr/sbin? Take typing lessons, test your typing speed and practice typing for free! This is keybr.com, a web application that will help you teach touch typing. Touch typing is typing without using the sense of sight to find the keys. A person possessing touch typing skills will know their location on the keyboard through muscle memory. It can improve any individual's typing speed and accuracy dramatically.

5 Fun things To Do on School Computers - Pahgawks Animations - StumbleUpon November 26th, 2010 I know it's been a while, but I'm reinstating my weekly blog post policy. This week will be about something I've wanted to write about for a while: School computers! Security Development Conference 2012 With the rapid evolution of cloud computing, mobile devices and other technologies, user data has become increasingly dependent on the security of software. The amount and types of data available for collection, analysis and dissemination have increased the importance of reducing the risk associated with protecting data. The second annual Security Development Conference will bring together some of the best and brightest information security professionals from a variety of industries. Attendees will learn about proven security development practices through interactions with peers, industry luminaries and other organizations.

Become a Programmer, Motherfucker If you don't know how to code, then you can learn even if you think you can't. Thousands of people have learned programming from these fine books: Learn Python The Hard Way Learn Ruby The Hard Way Learn Code The Hard Way Top 40 Useful Sites To Learn New Skills The web is a powerful resource that can easily help you learn new skills. You just have to know where to look. Sure, you can use Google, Yahoo, or Bing to search for sites where you can learn new skills , but I figured I’d save you some time. Here are the top 40 sites I have personally used over the last few years when I want to learn something new.

20+ Small Yet Powerful Windows Application Are you bored of using huge software which takes lots of disk space? Do you want to perform all your desired action but with less hard disk consumption ? If these are the questions going on in your mind then this would be the best post for you. Hands-On UNIX System Administration — Spring 2011 Announcements (3/16) Kevin Mullally, manager of the EECS Instructional Support Group, and other INST staff will be holding a discussion with the OCF on system administration practices tomorrow, 17 March, at 1:30PM in 102 Barrows. Topics will include mail and web servers (e.g., anti-spam and CGI), as well as how the OCF is run. All are invited to attend!

The Hacker Manifesto by +++The Mentor+++ Written January 8, 1986 Another one got caught today, it's all over the papers. "Teenager Arrested in Computer Crime Scandal", "Hacker Arrested after Bank Tampering"... Damn kids. They're all alike. New programming slang - Programming A question recently posted on stackoverflow.com asked for people to submit programming terms that they or their team have coined and have come into regular use in their own circles. Below are the most popular answers Yoda Conditions The act of using if (constant == variable) instead of natural if (variable == constant),; for example, if (4 == foo).