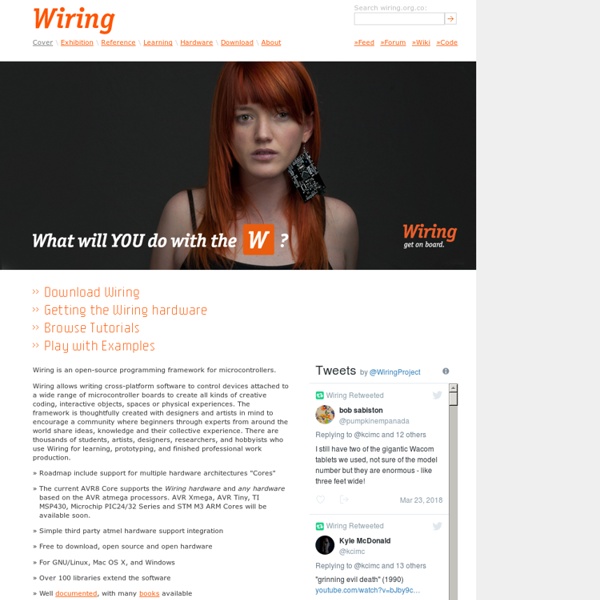 Wiring is an open-source programming framework for microcontrollers. Wiring allows writing cross-platform software to control devices attached to a wide range of microcontroller boards to create all kinds of creative coding, interactive objects, spaces or physical experiences. The framework is thoughtfully created with designers and artists in mind to encourage a community where beginners through experts from around the world share ideas, knowledge and their collective experience. There are thousands of students, artists, designers, researchers, and hobbyists who use Wiring for learning, prototyping, and finished professional work production. » Roadmap include support for multiple hardware architectures "Cores" » The current AVR8 Core supports the Wiring hardware and any hardware based on the AVR atmega processors.

RPi Hub Notice: The Raspberry Pi Wiki pages on this site is collaborative work - the Raspberry Pi Foundation is not responsible for content on these pages. Now shipping to customers See the Buying Guide on how to order one, or visit the Raspberry Pi Foundation Home Page About The Raspberry Pi production board (model B Rev 2.0) 3D CAD Model of the Raspberry Pi 3 Model B (Download) BoardSerialSingleSided3 If you don't have an easy way to order an Arduino board or kit, you can etch this PCB design by hand and solder it together. It is pin-compatible with the Arduino Diecimila, and should work with any Arduino shield. This is the third revision of the board: the Arduino Single-Sided Serial version 3, or s3v3, or Arduino Severino. It was designed by Adilson Akashi, based on the previous version.

Micro Python - Python for microcontrollers The pyboard is a compact and powerful electronics development board that runs Micro Python. It connects to your PC over USB, giving you a USB flash drive to save your Python scripts, and a serial Python prompt (a REPL) for instant programming. Requires a micro USB cable. Raspberry Pi » The Rantings and Ravings of a Madman So lately, I’ve been trying to use one of my Raspberry Pis as a WiFi bridge. That is connecting the Pi to a WiFi network, and sharing it out via the ethernet port. I was trying to do that with the RT5370 USB sticks that I was also using to broadcast hotspots. With the default drivers in Raspbian however, trying to add wlan0 to a bridge results in this message can't add wlan0 to bridge br0: Operation not supported According the the drivers, wlan0 can’t do it. The only way to add the RT5370 NIC to a bridge is to activate 4addr (4 address frame) mode. iw wlan0 set 4addr on

Extended Framework (API) Cover \ Exhibition \ Reference \ Learning \ Hardware \ Download \ About »Feed »Forum »Wiki »Code Framework (A-Z) \ Libraries \ Environment \ Language: Structure [] (array access) = (assign) , (comma) // (comment) {} (curly braces) #define delete . 39 Euros FiPy Board Supports Sigfox, LoRa, LTE Cat M1/NB1, Bluetooth 4.2, and WiFi (Crowdfunding) Long range LPWAN solutions have just started to hit the market, and there are so many standards such as Sigfox and LoRa that it’s difficult to know who will eventually be the winner, or if different standards will co-exist over the long term, and in a general sense it might not be so easy to decide which one is best suited to your project without experimenting first. Pycom has a solution to this problem, as they’ve made a board similar to LoPy with WiFi, Bluetooth, and LoRa, but instead included 5 long and short range IoT protocols: Sigfox, LoRa, LTE Cat M1 & Cat NB1, Bluetooth, and WiFi. Pycom FiPy board specifications: FiPy name is most probably derived from Five IoT protocols, and microPython support.

Quick start guide What you will need Required SD CardWe recommend an 8GB class 4 SD card – ideally preinstalled with NOOBS. You can buy a card with NOOBS pre-installed, or you can download it for free from our downloads page.Display and connectivity cablesAny HDMI/DVI monitor or TV should work as a display for the Pi . For best results, use one with HDMI input, but other connections are available for older devices. Phasing out fairware Virgil Dupras2013-03-16 When I started my adventure with open sourcing my shareware apps, I had two main goals. First, I wanted to see if it was possible to make money with open source shareware-type apps. Second, I wanted to bring more developers to the projects to ensure their continued existence (and for the fun of it).

[TUTO] Install and SetUp minidlna media server Hi All,My name is Georges. 24. a French guy interested in RasPi I have seen several tutorials about minidlna server but, there was always something missing, so I want to share with you. The idea is to use the RasPi as a multimedia server (in my case, for my PS3).

Free as in Speech, Fair as in Trade Virgil Dupras2010-09-30 Update 2015-01-02: Fairware has been phased out for a while now so a couple of references made in this article don't make much sense anymore... But the plan was still a sound one :) Last year, I made the source code of my proprietary applications publicly available in a similar way than what was done for e text editor [dead link] a couple of months before. The primary goal was to reduce the consequences of the bus factor for my customers, while still earning money from developing software. In this primary goal, I was successful (yay!) Emerging Technology Trends for 2015 The focus of building the Radar is our bi-annual face-to-face meeting. Before the meeting TABbers are usually talking to plenty of people and thinking about what ought to be blipped. Non-TAB ThoughtWorkers lobby for things they’re interested in, although it's the TAB's Radar, we seek out opinions from lots of sources, inside and outside ThoughtWorks. At the face-to-face, we spend several hours on the Radar. Our main aim during the meeting is to decide what the blips are, and which rings they fall into. Since this is the most contentious part of the process, it's valuable to do this while we’re together.

mib.com - The Facts About MIB MIB ensures that companies can offer – and consumers can purchase – affordable life and health insurance protection. MIB Group, Inc. is a member-owned corporation that has operated on a not-for-profit basis in the United States and Canada since 1902. MIB's Underwriting Services are used exclusively by MIB's member life and health insurance companies to assess an individual’s risk and eligibility during the underwriting of life, health, disability income, critical illness, and long-term care insurance policies. These services "alert" underwriters to errors, omissions or misrepresentations made on insurance applications. MIB.com - Request Your MIB Consumer File As a nationwide specialty consumer reporting agency under the federal Fair Credit Reporting Act (FCRA), MIB provides both US and Canadian consumers with the rights, protections and privileges available under FCRA without any differentiation based on residence, citizenship or other nexus. Therefore, there is no charge to request a copy of your MIB Consumer File (if one exists) once per year directly from MIB. In addition, in the event that you have received an adverse underwriting decision letter from an insurer indicating that an MIB record influenced the underwriting process which resulted in your application being rated or declined, then MIB will provide you with a free copy of your MIB Consumer File in addition to your free annual copy. As a practical matter, people who are in good health, approved for a policy as a standard or preferred risk, typically will not have any information reported to MIB. Only you can request an MIB Consumer File on yourself. What Should I Expect to Receive?