Cerebrum: Mobile Passwords Lifted Acoustically with NASB. There are innumerable password hacking methods but recent advances in acoustic and accelerometer sensing have opened up the door to side-channel attacks, where passwords or other sensitive data can be extracted from the acoustic properties of the electronics and human interface to the device. 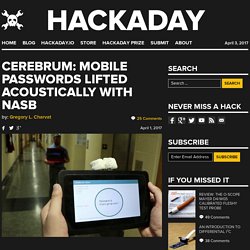 A recent and dramatic example includes the hacking of RSA encryption simply by listening to the frequencies of sound a processor puts out when crunching the numbers. Now there is a new long-distance hack on the scene. The Cerebrum system represents a recent innovation in side-channel password attacks leveraging acoustic signatures of mobile and other electronic devices to extract password data at stand-off distances. Research scientists at cFREG provide a compelling demonstration of the Cerebrum prototype. Many of these methods have been shown previously, as explained by MIT researcher T. To counter this argument, the researchers at cFREG have taken it to a much higher and far more accurate level.

Sir, It Appears We’ve Been Jammed! In a move that would induce ire in Lord Helmet, [Kedar Nimbalkar] has hacked together a simple — yet effective — WiFi jammer that comes with a handful of features certain to frustrate whomever has provoked its wrath. 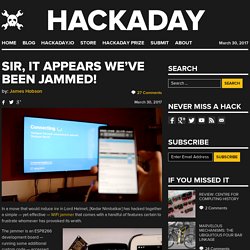 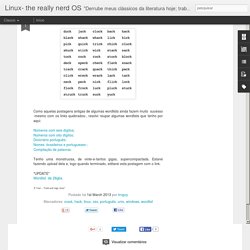 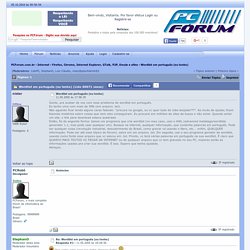 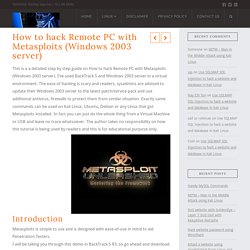 I’ve used BackTrack 5 and Windows 2003 server in a virtual environment. The ease of hacking is scary and readers, sysadmins are advised to update their Windows 2003 server to the latest patch/service pack and use additional antivirus, firewalls to protect them from similar situation. Exactly same commands can be used on Kali Linux, Ubuntu, Debian or any Linux that got Metasploits installed. In fact you can just do the whole thing from a Virtual Machine or USB and leave no trace whatsoever. The author takes no responsibility on how this tutorial is being used by readers and this is for educational purpose only. Introduction Metasploits is simple to use and is designed with ease-of-use in mind to aid Penetration Testers. 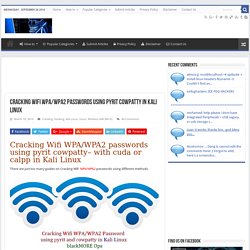 Everyone has their own take on it. Personally, I think there’s no right or wrong way of cracking a Wireless Access Point. Following way is my way and I found it extremely efficient and fast during my tests for Cracking Wifi WPA/WPA2 passwords using pyrit cowpatty in Kali Linux where I attacked with Dictionary using either cuda or calpp (cal++) and at the same time I used WiFite to fast track a few things. This whole process was used in Kali Linux and it took me less than 10 minutes to crack a Wifi WPA/WPA2 password using pyrit cowpatty WiFite combination using my laptop running a AMD ATI 7500HD Graphics card. 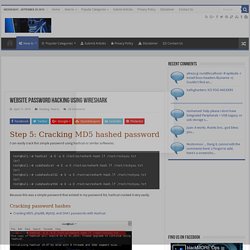