Martin Scorsese's Film School: The 85 Films You Need To See To Know Anything About Film 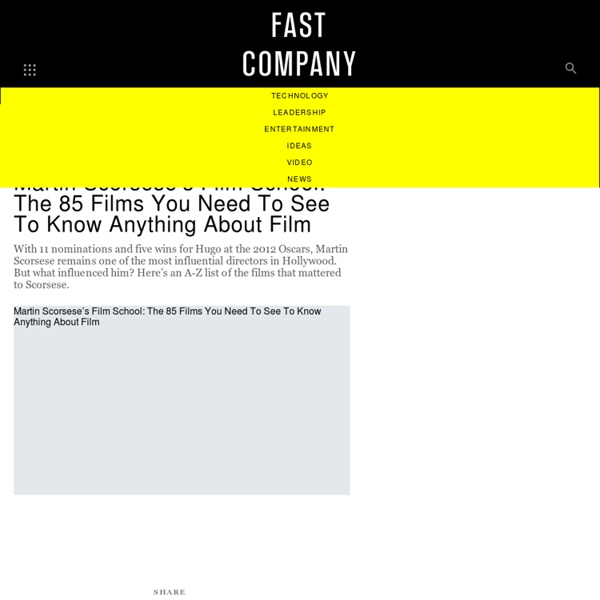 Interviewing Martin Scorsese is like taking a master class in film. Fast Company’s four-hour interview with the director for the December-January cover story was ostensibly about his career, and how he had been able to stay so creative through years of battling studios. But the Hugo director punctuated everything he said with references to movies: 85 of them, in fact, all listed below. Some of the movies he discussed (note: the descriptions for these are below in quotes, denoting his own words). Others he just mentioned (noted below with short plot descriptions and no quotes). But the cumulative total reflects a life lived entirely within the confines of movie making, from his days as a young asthmatic child watching a tiny screen in Queens, New York to today, when Scorsese is as productive as he’s ever been in his career–and more revered than ever by the industry that once regarded him as a troublesome outsider. The Band Wagon: “It’s my favorite of the Vincente Minnelli musicals. Mr.

Weirdest Movies Ever Made A Lynchian renaissance is happening at the Pennsylvania Academy of Fine Arts, where David Lynch studied painting before his surreal entry into filmmaking with 1977’s Eraserhead. The school is the site of Lynch’s first major museum exhibition in the United States. It was there that he created several short films to animate his artworks, planting the early seeds for Eraserhead — starring Jack Nance as a young father crippled by the anxiety of fatherhood. A mutant baby, industrial cityscape, and shadowy apartment building leave an indelible mark on the viewer. Criterion is re-releasing Eraserhead on Blu-ray September 16. In honor of Lynch and his surreal universe, we’re celebrating 50 other weird works on film — many that rival Lynch’s strange aesthetic.

666 DIY Horror Filmmaking Tutorials It’s that time of year again, so we thought it was time to update last years killer feature “Horror Filmmaking: From Script to Scream.” That’s right a sequel! This time we are narrowing the focus a bit and concentrating on the DIY (Do It Yourself) elements. Hopefully this will help you slash the budget without murdering your production values. DIY: Blood, Bullets & Stunts 25 Spectacular Movies You (Probably) Haven’t Seen Midnight in Paris Woody Allen’s latest places starving writer Owen Wilson in Paris with his fiancée, Rachel McAdams. Searching for inspiration for his incomplete novel, Owen begins taking strolls around the city at night where he discovers an unexpected group of people. I wish I could be more specific, but it would ruin the surprise. Know that it is brilliant, witty and full of mystique. 92% on Rotten Tomatoes (RT).

Top 10 Shocking Documentaries Movies and TV As a visual medium, documentaries frequently succeed in portraying the unimaginable far better then any book alone could do. Beaming everything from the consequences of child abuse to the horrors of nuclear warfare into the homes of millions, the following infamous documentaries shock the viewer and challenge perceptions. Please note: Almost all the videos featured contain graphic and disturbing content, relevant to the topic at hand. Top 20 Banned Movies of All Time #1 Dorlita In The Passion Dance Dorlita in the Passion Dance (1894) might have been the first film ever to be banned in the U.S. More than a decade before Hollywood studios were even operating, this short film was banned in New Jersey after it began to appear in peepshows and burlesque houses. #2 Reservoir Dogs

THE TERRY GILLIAM SCHOOL OF FILM: 10 LESSONS FOR DIRECTORS TODAY “Billy Wilder once said that there are only two things aging directors can’t avoid…awards and haemorroids [sic]. I’ll stick with just the awards for the moment, please.” So says a recent Facebook post from the brain behind some of the greatest films of the last century, from Monty Python and the Holy Grail to Brazil to The Adventures of Baron Munchausen. Yes, Terry Gilliam has joined Facebook, as an experiment to promote his latest venture, the short film The Wholly Family, about Italian Pulcinella figurines coming to life inside a small boy’s imagination.

Woman's Face Released in 1941, A Woman's Face tells the story of Anna Holm (Joan Crawford), a mysterious woman on trial for murder. The story unfolds in flashbacks related by Anna Holm's partners in crime. Anna is a very bitter woman, unable to accept the fact that her once-beautiful face has been horribly disfigured by fire. She takes out her anger and frustration on just about everyone, and not surprisingly, incurs a lot of bad feeling among her little band of associates. Anna's specialty is blackmail, and one of her victims is the erring wife of a prominent plastic surgeon (Melvyn Douglas). He persuades Anna to undergo several operations, although he has his reservations: "If I am successful I will have created a monster: a beautiful face with no heart."

10 Movies That Could Change Your Understanding Of Life Every movie has the ability to affect its viewer differently. Some films evoke wonder and excitement, while others provoke fear or sorrow, but a commonality among all films is a prevailing message or theme. Some films can summon such profound questions, that it changes the way you perceive life as you once knew it. The following list contains 10 unique movies that do just that. 10) Donnie Darko The Best Movies From 1982 You Probably Haven’t Seen Just last week /Film was part of the announcement that the Alamo Drafthouse in Austin is recreating the Summer of 1982. There are many who believe that, for whatever cosmic reason, ’82 was a perfect year in cinema. Between The Thing, Blade Runner, Star Trek II and E.T.