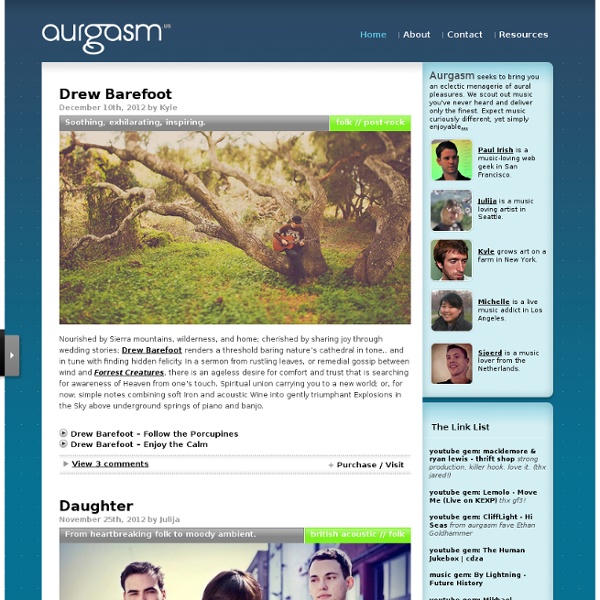 Keston Cobblers Club December 4th, 2013 by Julija english folk // pop Keston Cobblers Club delivers a joyous blend of traditional-feeling folk melodies, toe-tapping rhythms and a slightly quirky vibe. While comparisons to the early Noah and the Whale, Mumford & Sons and Beirut are inevitable, the British quintet’s take on English folk revival is unique and refreshing. The album opener, “The Children Who Wear Socks On Their Heads”, A Scene of Plenty (2013), leads with frenetic accordion and percussion is a high-energy foot-stomping musical extravaganza.

Tracks It has been four years since the percussive, polyrhythmic sounds of Lisbon's batida scene began trickling out of the city on the Tagus and making their way to the outside world (or at least the rest of Europe and North America)—first via DJ Marfox and his Príncipe Discos debut, Eu Sei Quem Sou, and then peers and protégés like DJ Nigga Fox, Blacksea Não Maya, Piquenos DJs Do Guetto, and Nidia Minaj. The music's path has run parallel, in some ways, to Chicago footwork's: both are inner-city styles built around radically innovative rhythms that at first could sound forbiddingly difficult to untrained ears, and both have bubbled up to influence the wider electronic landscape. If batida no longer sounds quite as alien as it did upon a first encounter with its spinning rotors and elliptical movements, it's still dazzling in its rhythmic complexity: Atop a shuffling approximation of a 4/4 beat balances an unsteady beehive of motion, aswarm with kinetic energy.

Windows Media Guide First published on October 2, 2017. Revised on June 1, 2018, upon announcement of the discontinuation of the Groove Music iOS and Android apps. On October 2, 2017, we announced that we'd be partnering with Spotify to bring the world’s largest music streaming service to you. Sister Outsider Headbanger On Being a Black Feminist Metalhead I'm not sure exactly when or how it happened, but at some point in my childhood I began to think I was a white guy trapped in the body of a black girl. And not just any white guy, either—a guitar player in a heavy-metal band. Ok, stop laughing. INDIEBLOGHEAVEN Mila Kunis was already damn near perfect before this day began, but as I type this I think she’s even hotter. How can that be possible? She rescues this UK reporter who’s nervous as hell during a press junket, and she shows why she’s the hottest babe EVER. This isn’t an interview; it’s a genuine conversation between a novice reporter about his buddies and Mila who loves the uniqueness of his unpolished ways. Watch it over at Grantland. I caught some sheeeee-ite from people on Twitter and text about me tweeting the “Call me Maybe/Head Like a Hole” mashup, “Call Me a Hole.”

My Major Company UK It’s hard to pin down 22-year-old singer, producer, graphic designer and man about town Japayork. Over the last years he has gone on record claiming to be from Holland, Uraguay, Japan New York. Sometimes when people ask him where he is from, he replies, “the future”. How do people respond? “They usually say, ‘oh’,” he says. Top 10 Free Ways To Discover New Music Online Bored with your music and want to discover some new bands or singers? There are two main ways you can do that online. You can use services which create music maps, allowing you to explore artists similar in genre to the artists you already listen to. Or you can use music blogs and websites that showcase independent or up-and-coming artists, whether the music is being reviewed, or posted by the musicians themselves. Some of these websites have a community built around them, which gives fans the opportunity to interact directly with these new talents.

Top 10 Metal Scenes In America By Brandon Ringo 10. Little Rock, AR Little Rock isn’t the kind of town that’s associated with heavy metal very often. 100 legal sites to stream and download free music Music is life, I never found anyone who’s life isn’t influenced by Music. Why the best things in life like Music are not free? Actually, there is more legally available for free Music than you think.