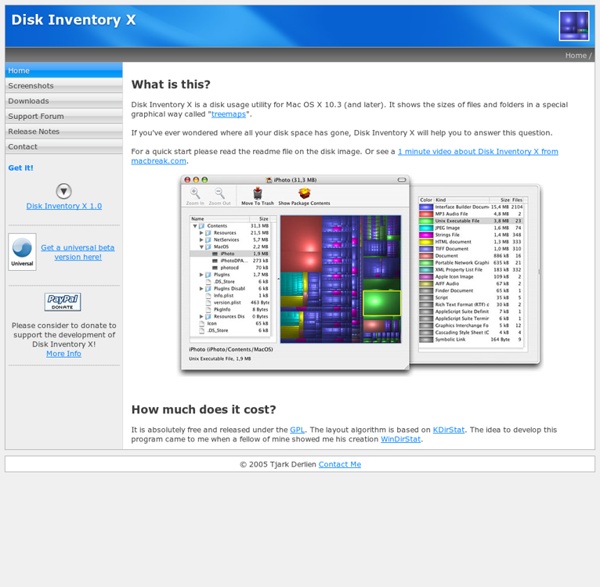 What is this? Disk Inventory X is a disk usage utility for Mac OS X 10.3 (and later). It shows the sizes of files and folders in a special graphical way called "treemaps". If you've ever wondered where all your disk space has gone, Disk Inventory X will help you to answer this question. How much does it cost? It is absolutely free and released under the GPL.

PuTTY: a free telnet/ssh client Home | FAQ | Feedback | Licence | Updates | Mirrors | Keys | Links | Team Download: Stable · Snapshot | Docs | Changes | Wishlist PuTTY is a free implementation of SSH and Telnet for Windows and Unix platforms, along with an xterm terminal emulator. It is written and maintained primarily by Simon Tatham. Open-sourcing Stylo by Alex MacCaw I learn by setting projects for myself, and so a few months ago I decided to create an app called Stylo. The idea was to let people design basic web apps using a Fireworks-like interface, ultimately exporting the finished design as CSS. I’d always admired complex apps like 280 Slides, so was excited to be building something with similar problems. I started writing the app with CoffeeScript, Spine and Sprockets, my technologies of choice. A month later, after working in the evenings and weekends, I had a basic prototype which you can see a demo of here (webkit only). Have a play around with the app.

Ping Tunnel Using ptunnel Client: ./ptunnel -p <proxy address> -lp <listen port> -da <destination address> -dp <destination port> [-c <network device>] [-v <verbosity>] [-f <logfile>] [-u] [-x password]Proxy: . Map a network drive on a Mac - OS X Daily If you frequently access a file server from a Mac it’s pretty helpful to map the network drive to your desktop. There’s two ways to do this, one method is just mapped for one time use and will reset after a reboot, and another method is a more permanent route that allows the mapped network drive to always appear and mount on your desktop after system reboots and user logins. Map a network drive to Mac OS X This method maps a network drive that will disappear if the network connection drops or if you reboot your Mac:

AppFresh for Mac – metaquark Apple Updates AppFresh integrates native update checking for Apple software and system updates, so you don’t need to run Apple’s Software Update separately. Sparkle Updates Net Tools The Creation Net Tools is cutting-edge security and network monitoring software for the Internet and Local Area Networks, providing clients with the ability and confidence to meet the challenges of tomorrow's technology. Keeping pace with the industry trends, we offer professional tools that support the latest standards, protocols, software, and hardware for both wired and wireless networks. The main goal is the creation of high quality software. Net Tools is a very strong combination of network scanning, security, file, system, and administrator tools useful in diagnosing networks and monitoring your PC and computer's network connections for system administrators.