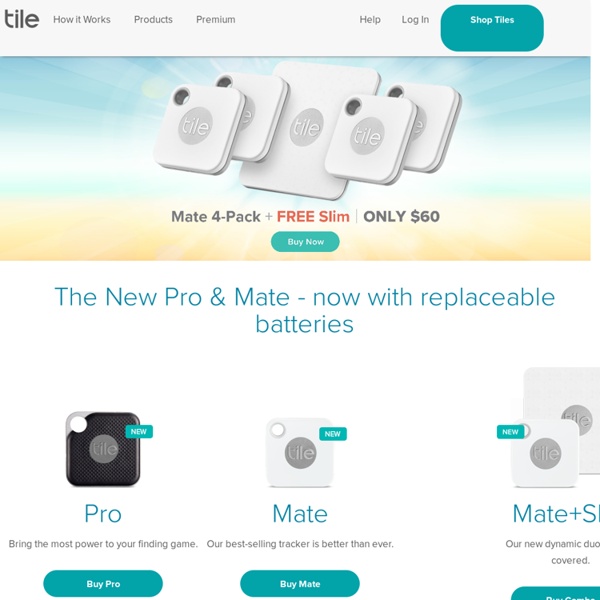 StormTag - A Bluetooth Weather Station. On Your Keyring. by Jon Atherton What if you could be part of a team that changed the way our climate was analysed? We’re about to start a 2 year worldwide project to perfect crowd sourced weather data, and we need your commitment to help us. Wouldn’t it be great to carry a weather station on your keyring? New TiVO Offers One Cool Feature…iPad Streaming By Lory | August 20, 2013 | No comment yet Today, TiVo is announcing the launch of a new DVR that promises to free you from your living room and let you take your favorite shows with you on the go. The new “Roamio” DVR “delivers wherever the viewer’s roaming may take them.” The Roamio comes with a fairly high price tag, ranging in price from $199.99 to $599.99. Business Insider pointed out that not many TV lovers will invest that kind of money on the new device since most cable companies offer a free DVR with their subscription.

Lasting Relationships Rely On 2 Traits Gottman wanted to know more about how the masters created that culture of love and intimacy, and how the disasters squashed it. In a follow-up study in 1990, he designed a lab on the University of Washington campus to look like a beautiful bed-and-breakfast retreat. He invited 130 newlywed couples to spend the day at this retreat and watched them as they did what couples normally do on vacation: cook, clean, listen to music, eat, chat, and hang out. And Gottman made a crucial discovery in this study—one that gets at the heart of why some relationships thrive while others languish.

SPY-C Tank – Logicom UK The App controlled SPY-C Tank is designed to work with Apple or Android smart phones or tablets. The SPY-C Tank creates its very own Wi-Fi space for control and live view. The SPY-C Tanks built-in digital camera transmits a live image back to your device which allows you to control and view whilst in another room - the moving head allows you to look around the room. You can also record the motion footage or take a snapshot image which will be recorded directly onto your smart phone or tablet. Download the Free App to your Android or Apple device and it becomes the controller for the SPY-C Tank.

QLEEK - Your Digital Life in the Real World The campaign is over, click here for exclusive future updates. Version Française plus bas et traduction des contreparties Grow your collection to a unique piece of art! Qleek is a beautiful way to tell who you are and what you like. It allows you to feature your most beloved songs, photographs and videos in your living room, your office or your store. We think you’ll love it!

Structure Sensor: Capture the World in 3D by Occipital The Structure Sensor gives mobile devices the ability to capture and understand the world in three dimensions. With the Structure Sensor attached to your mobile device, you can walk around the world and instantly capture it in a digital form. This means you can capture 3D maps of indoor spaces and have every measurement in your pocket. You can instantly capture 3D models of objects and people for import into CAD and for 3D printing. You can play mind blowing augmented reality games where the real world is your game world.

VIDEO: Big Brother's Aaryn Confronted by Julie Chen for Racist Comments - Today's News: Our Take Aaryn Gries and Julie Chen On Thursday night, Aaryn Gries was finally evicted from the Big Brother house. During the live exit interview, host Julie Chen didn't waste time before asking Aaryn about her multiple racist remarks. "Being Southern, it is a stereotype and I have said some things that have been taken completely out of context and wrong," Aaryn said. "I do not mean to ever come off racist.

Part 2 PRESS RELEASE: After copious amounts of work and many sleepless nights Absinthe 2.0 is finally here to jailbreak your device. This release has been a large collaborative effort between Chronic-Dev Team and iPhone Dev Teams (Jailbreak Dream Team) This jailbreak supports firmware 5.1.1 ONLY and is again one of the most easiest jailbreaks to use (so easy your grandma could do it ;D)