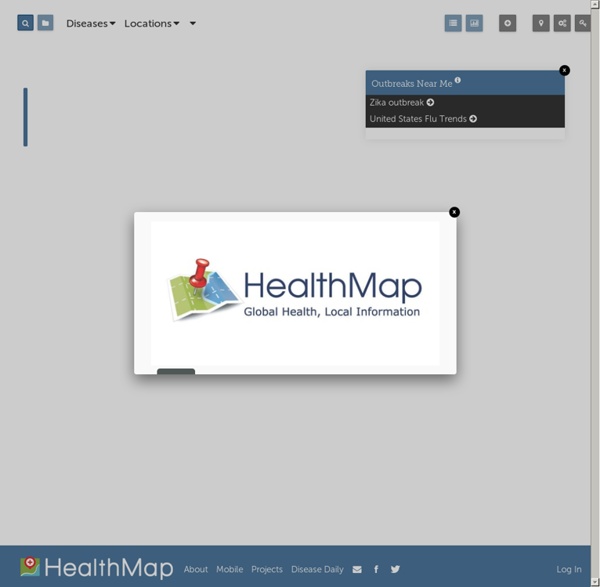 Disease Categories Twelve disease categories are used to help you quickly find what you're looking for within your local area. Most of the categories refer to where the disease affects your body, such as Gastrointestinal for cholera or Respiratory for pneumonia. We also keep track of environmental risks (i.e. beach closures due to sewage) and animal diseases (i.e. foxes found with rabies) to provide you a broader picture of diseases in your area. The number of alerts in each category determines the order in which they appear in the Outbreaks Near Me section. The category with the greatest number of alerts appears first.

DengueMap Marker Color Marker color reflects the noteworthiness of events at a particular location during a given time window. An event's degree of noteworthiness is based on the significance rating of the alert provided by HealthMap users. Facebook CEO Mark Zuckerberg admits 'mistakes' were made in protecting user data Updated Facebook boss Mark Zuckerberg has broken his silence on Cambridge Analytica and admitted the social media network "made mistakes" in protecting users' data. Key points: Mark Zuckerberg says Facebook will do more to restrict developers who have misused dataStatement comes as company is in crisis mode amid a #DeleteFacebook movement Man who created the app that was used to mine data says he's been made a "scapegoat"

Open Source, Geo & Health Workshop (#gecohealth) Invalid quantity. Please enter a quantity of 1 or more. The quantity you chose exceeds the quantity available. Please enter your name. Please enter an email address. Please enter a valid email address. NatGeo Mapmaker Interactive YouTube Help The URL to a YouTube video must be the full length url. To ensure you are using the correct URL, visit your video on youtube.com. The URL to your video will be in your browser's address (see photo for an example) Chinese video surveillance network used by the Australian Government Updated 58 minutes agoWed 12 Sep 2018, 4:20am They've been used to identify ethnic minorities and political dissidents in China, and were last month banned by the US due to concerns they were creating a "surveillance network" among federal agencies. Now it appears a pair of Chinese video surveillance companies have become entrenched in Australia's government as well. One camera was used to monitor security threats at a sensitive Australian military base. Another hangs outside the front entrance of the Canberra office complex that houses the Australian government's top lawyers, two federal departments focussed on national security and an Australian intelligence agency.

Google Maps Launch Google MapsLaunch Maps in LUNA Browser The over 120 historical maps in the Google Maps have been selected by David Rumsey from his collection of more than 150,000 historical maps; in addition, there are a few maps from collections with which he collaborates. These maps can also be seen in the Gallery layer of Google Earth, Rumsey Historical Maps layer, and in the Google Earth viewers on this website. All the maps contain rich information about the past and represent a sampling of time periods (1680 to 1930), scales, and cartographic art, resulting in visual history stories that only old maps can tell. Each map has been georeferenced, thus creating unique digital map images that allow the old maps to appear in their correct places on the modern globe.

Princeton study: Nighttime images help track disease from the sky Public release date: 8-Dec-2011 [ Print | E-mail Share ] [ Close Window ] Contact: Morgan Kellymgnkelly@princeton.edu 609-258-5729Princeton University Melbourne - Planning Schemes Online Skip to content Department of Transport, Planning and Local Infrastructure Planning Schemes Online You are here: Home > Planning Schemes > Melbourne My devices are sending and receiving data every two seconds, sometimes even when I sleep Updated 3 Dec 2018, 7:24amMon 3 Dec 2018, 7:24am When I decided to record every time my phone or laptop contacted a server on the internet, I knew I'd get a lot of data, but I honestly didn't think it would reveal nearly 300,000 requests in a single week. On average, that's about one request every two seconds.

Collections - Old Maps Online: Project Below are brief descriptions of the online digital map collections searchable and accessible through the OldMapsOnline portal. Nearly all the institutions providing online map collections have a much larger paper map collection available at their respective institutions, but the OldMapsOnline portal will only search and provide direct linkage to the online maps. During the JISC funded project we added collections from around the world. This funding has now finished but we plan to continue making content updates periodically. Read more here to find out how to add your collection: The participating institutions are: Pollution Locator: USA Over 4 billion pounds of toxic chemicals are released by industry into the nation's environment each year, including 72 million pounds of recognized carcinogens. Scorecard can give you a detailed report on chemicals being released from any of 20,000 industrial facilities, or a summary report for any area in the country. Scorecard spotlights the top polluters in the U.S., and ranks states and counties by pollutant releases. Provide your zipcode to get a report for your community, or use the Pollution Locator to search for reports on specific areas. To zoom in to your state's report, click on the map below. United States

Google Chrome’s Users Take a Back Seat to Its Bottom Line Google Chrome is the most popular browser in the world. Chrome routinely leads the pack in features for security and usability, most recently helping to drive the adoption of HTTPS. But when it comes to privacy, specifically protecting users from tracking, most of its rivals leave it in the dust. Users are more aware of, and concerned about, the harms of pervasive tracking than ever before. So why is Chrome so far behind?