How to Travel Around the World for $418 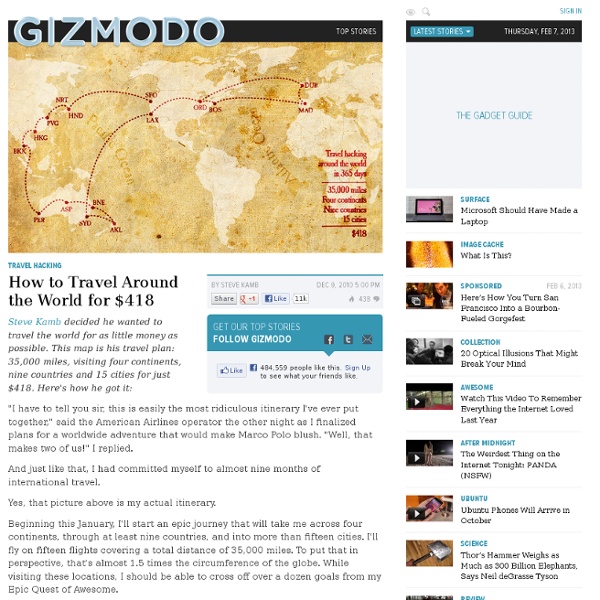 Make the Best of Your Travel Plans This Weekend Some other details that make travel better: Dress comfortably and in layers. Give yourself plenty of extra time if you're flying or taking a train. Plan ahead to make the trip enjoyable and make the most of your time. Particularly when flying, all of that can help with the inevitable delays this time of year. Oh, and if you have a super long bus or train ride (I did one that was 10 hours...yuck), I usually get as little sleep as possible the night before, and as soon as a I get on the train, take a sleep aid/nyquil/benadril. 10 of the World's Best Surf Spots It wouldn’t be hard to give the definition of surfing if you were to consider the desire to be out in the water, the freedom to conquer a great force of nature that can push you where you have never been before. It’s a whole new world, it’s like a drug that you start taking. Addictive. But surfing without great waves is like hot beer (totally not cool), therefore we decided to see what are some of the best places for surfers. 1. There’s no doubt that Australia has some of the best beaches and best waves, which are perfect ingredients for a surfer. It’s the 70km of beaches and four epic point breaks (The Spit, Main Beach, Narrowneck, Palm Beach and Mermaid beach) that made people call it, the surfers’ paradise . 2. Images : 1 , 2 , 3 , 4 The Mentawai Islands are a wave-rich chain of about seventy islands and islets off the western coast of Sumatra in Indonesia, one of the most consistent surf destinations in the world. 3. Images: 1 , 2 , 3 , 4 4. images: 1 , 2 , 3 , 4 , 5 , 6 5. 6. 7. 8.

Full Circle - blog Why Zambia- Quick summary Zambia is the ‘real’ Africa and predominantly (although not exclusively) a destination for the second time Africa Traveller who has got Africa in their blood and wants to move away from the more sanitised experiences, camps and lodges of South Africa. There is a charm and authenticity in Zambia that in my mind far out -weighs its Southern Africa neighbours. Flying internally in Zambia is expensive and mainly dominated by Proflight but Zambia generally speaking works out cheaper than Botswana and the camps and lodges are very well run and offer increasingly high standards of accommodation, guiding and food, not to mention adventure for those looking for it… as this is the mecca for walking & canoeing safaris. The Zambian people are the country’s greatest asset. The destination especially the Luangwa Valley is extremely popular with the British, more so since Zimbabwe has declined and everywhere we went we met British couples of varying ages. Highly recommended.

25 Places You Have To See Before You Die Not long ago we came to you with the most incredibly super awesome bucket list of all time and while it included quite a few ridiculous activities (riot tourism?) it didn’t mention much in the way of traveling or seeing the world. So, as a gift to all of you globetrotters out there we decided to fix that and put together a list of 25 places you have to see before you die. Found in the Hunan province of China, the unique views from atop the Tianzi Mountains can be accessed by cable car. The site of some of the largest volcanic eruptions in history, this Greek island features picturesque beach side towns and Mediterranean sunsets. Situated on a mountain ridge overlooking Urubamba Valley in Peru, this is probably one of the most iconic remains of the massive Incan Empire. Composed of several volcanic islands in the North Atlantic the Azores are well known for their beautiful geography and isolation. Located in southwest Bolivia Salar de Uyuni is the world’s largest salt flat.

The Ultimate Travel Hacking Guide Travel hackers are the people constantly chasing miles, rewards points, and elite status. They are looking for every possible way to game the system for as much free travel as they can. Most travel hacking is about using miles and rewards to get free flights or hotels. However, for me, travel hacking is an idea. It’s a philosophy that says “I am going to bring costs as close to zero as possible.” Since only the die-hards (like myself) really want to spend hours and hours putting together mileage routes that might get them 100 extra miles or read the fine print to find a loophole they can exploit, I’ve put together this guide for the casual traveler who still wants to travel cheap. How to Hack to A Flight Since flights are usually the most expensive part of any trip, I thought I’d deal with this subject first. Let’s look at an example. Step 1: Use a site like Kayak as your baseline. Kayak returned these results for flying from New York to London: Skyscanner results: Momondo results:

World's top 10 best places to celebrate Christmas Christmas has become a global festival, regardless of religion or location. Lonely Planet's 1000 Ultimate Experiences lists the best places in the world to experience the yuletide spirit. With today's emphasis on present grabbing and overindulging, it's hard to deny that the real meaning of Christmas often seems forgotten. For a refresher, nothing compares to a pilgrimage to Jesus' birthplace. The energy on Manger Square and in the Old City on Christmas Eve could light a forest of Christmas trees. The place to be as the clock strikes 12 is St Catherine's Church, for the Midnight Mass service. Advertisement When too much Santa is never enough, rug up and head north to Finland's Arctic Circle. Surely you know what Christmas in the Big Apple looks like, thanks to countless movies: Christmas lights, cheesy muzak, preferably a light dusting of snow. Hit the beach to talk turkey with fellow travellers. You can rest assured that the spiritual heart of Catholicism knows how to do Christmas.

Turkey | Museum Hotel, Cappadocia | Geo Deluxe {*style:<i><b>A Museum to Live In </b> </i>*} Cappadocia is famous worldwide as a land where history, geography and architecture blend in perfect proportions. The Cappadocia Museum Hotel, perched on a pinnacle overlooking this stunning landscape, is a unique luxury boutique hotel that embodies and celebrates this past – it’s cave-walled rooms house not only the finest in modern hotel luxury, but also museum-quality artifacts and warm antique carpets that highlight and enliven this region’s colourful history. Rooms here are built into the soft tufa rock that makes Cappadocia a famous and other-worldly landscape worthy of the tourists that flock here from all points on the globe – this is a hotel of gorgeous stone that is built into the rock, achieving a perfect harmony between nature and builder. More than in just the rooms, the Cappadocia Museum Hotel in its entirety is a blend of art and history. -26 rooms and suites -open year-round

The New Way to Find the Best Airfare Deals | MintLife Blog | Personal Finance News & Advice If you’re like most bargain airfare seekers, chances are your flight shopping goes something like this: 1. Go to Kayak.com or Orbitz.com. Or Priceline.com, Hotwire.com, or Travelocity.com. 2. 3. Please. These days, websites alert you when particularly great deals become available out of your local airport to your desired destinations — not to mention the ones that actually predict what airfares will look like in the near future so you can adjust your travel plans accordingly. Interested? In the video above, WalletPop.com editor at large Jason Cochran walks you through the details, with specific advice on which websites to visit in order to get the best travel deals. Next, swing by Bing Travel and Momondo.com: those websites try to predict airfares based on historical data. Finally, these days your search for deals doesn’t end with the ticket purchase. For more details, watch the video above, or on WalletPop.com.

How to Fly Without ID and Skip Lines Lose the wallet to enter the fast lane? Strange but true. (Photo: Dam) In the world of orange alerts and terrorism, how do you fly without ID? I learned last week that–not only is it possible–it’s faster. My wallet was stolen at ETech in San Diego 3 hours before my flight was scheduled to leave for Austin, TX. Here’s what I did, first from the hotel: 1. 2. 3. At the airport: 1. 2. 3. The officer then called up my CA driver’s license number and put it on a temporary ID card that I could use to drive (and also get served alcohol when used in combination with an old student picture ID from Berlin). I had the student ID in a second wallet where I put cards, memberships, etc. that I use infrequently, so I don’t clog up my ultra-slim wallet. 4. The End Result — Faster without ID! I cleared security in 5 minutes, where it took others AHEAD of me in line with ID 15-20 minutes. I’ll be testing this on my return trip as well. Just another reminder to question what you “have to” do.

World's top 10 best cycling routes | Lonely Planet Best in Travel 2010 There's no better way to explore a place than by bike. Lonely Planet names the top 10 trips that should be on every cyclist's wish list. With the first half decidedly laid-back and the second portion anything but, the mix of scenery and sweat make this one of the best one-day rides in the country. Starting from university-town Dunedin you soon shed the trappings of the city and succumb to the lure of the open road. The serpentine route twists pleasantly along the shore, providing tremendous ocean views, and the terrain is made for cycling. Then suddenly there's a sharp turn to the right and you're gaining altitude like a climbing fighter-jet. Advertisement This justifiably renowned cycling route is best-known for the scenery – breathtaking rocky coastlines, the crystal clear Bras d'Or inland sea and the soaring ridges of the Cape Breton Highlands – especially in their autumn colours. Fascinating Cuba is a delight at helmet level. Photos: Top 10 greatest cycling routes