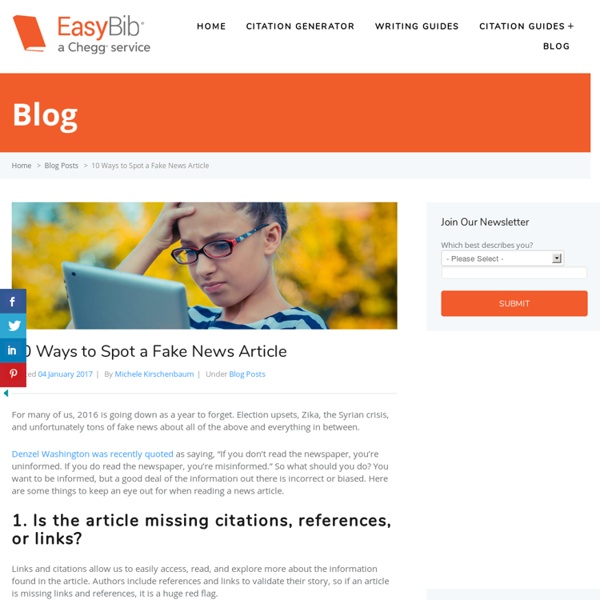 For many of us, 2016 is going down as a year to forget. Election upsets, Zika, the Syrian crisis, and unfortunately tons of fake news about all of the above and everything in between. Denzel Washington was recently quoted as saying, “If you don’t read the newspaper, you’re uninformed. If you do read the newspaper, you’re misinformed.” So what should you do? You want to be informed, but a good deal of the information out there is incorrect or biased. 1. Links and citations allow us to easily access, read, and explore more about the information found in the article. Many big name news sites, such as CNN, do not include links or citations, but other sites do. 2. An article without an author’s name is another red flag. 3. Do a Google search on the author’s name to find their occupation and locate other articles that the author has composed. 4. On the top or bottom of most websites, you should see a section titled “About Us.” 5. 6. 7. 8. 9. 10. How can you prevent the spread of fake news?

Fake news, bias, or satirical comedy what's the difference Fake News and K-12 Information Literacy: Following the November 2016 Presidential election, there was great concern about fake news on Facebook and in Google searches. And then, in what seemed to be perfect timing, a Stanford group released the study “Evaluating Information: The Cornerstone of Civic Online Reasoning” on November 22, 2016. The report conducted by Stanford History Education Group was an 18-month study that started well before the recent concerns about all of the online fake news. The results of the study show that students all the way to college age are not recognizing the basics of evaluating a source.

Did a Black Woman Named Malinda Borden Perish Because Titanic's Lifeboats Were 'Whites Only?' A photograph purportedly showing a woman named “Malinda Borden” is frequently shared on social media along with the claim that she had worked aboard the RMS Titanic and drowned at sea when that ship sank on its maiden voyage, as lifeboat seats were only made available to white passengers. Her name, according to the viral Facebook post, was nearly lost to history because the black workers who perished during the disaster were listed as property that was lost, rather than being included in the list of victims: <img class="aligncenter size-full wp-image-186737" src=" alt="" data-recalc-dims="1">TITANIC VICTIM MALINDA BORDEN was drowned at sea as she was working aboard the Titanic. Life boats were made available to WHITE women and WHITE children ONLY. The Black workers were not listed among the passengers or victims.

10 Hilarious Hoax Sites to Test Website Evaluation – TeachBytes In this day and age, where anyone with access to the internet can create a website, it is critical that we as educators teach our students how to evaluate web content. There are some great resources available for educating students on this matter, such as Kathy Schrock’s Five W’s of Website Evaluation or the University of Southern Maine’s Checklist for Evaluating Websites. Along with checklists and articles, you will also find wonderfully funny hoax websites, aimed at testing readers on their ability to evaluate websites. These hoax sites are a great way to bring humor and hands-on evaluation into your classroom, and test your students’ web resource evaluation IQ! Check out these 11 example hoax sites for use in your own classrooms:

Fake Hurricane Sandy Photos Spread On Internet As Storm Barrels Toward Northeast On Facebook, the stirring picture has more than 70,000 likes and 90,000 shares, and the viral image was picked up by NPR, The Washington Post, The Daily Beast, Talking Points Memo and others according to Poynter. The only problem? It’s not a picture from Hurricane Sandy. The picture, taken by photographer Karin Markert, is actually from September. In a comment posted by Poynter, Markert elaborates on the image’s (inaccurate) claim to fame. “I was using it as my Facebook cover photo, which apparently is ‘public,’ and what do you know? The Smell Test: Educators can counter fake news with information literacy. Here’s how. Illustration by Steve Brodner Discerning fact from fiction in news and online content has never been more challenging. From “pizzagate”—false reports of a child sex ring operating in a DC pizza parlor—and creepy clown attacks to retweeted election headlines touting events that never happened, fake news is rampant. Twenty-three percent of Americans say they have shared fabricated reports, knowingly or not, according to a December Pew Research Center report. Librarians have an opportunity to take leadership in the current crisis. As proven authorities on information literacy, library professionals can help students analyze news authenticity.

Don't be fooled by fake images and videos online One month before the 2016 U.S. presidential election, an “Access Hollywood” recording of Donald Trump was released in which he was heard lewdly talking about women. The then-candidate and his campaign apologized and dismissed the remarks as harmless. At the time, the authenticity of the recording was never questioned. Just two years later, the public finds itself in a dramatically different landscape in terms of believing what it sees and hears. Advances in artificial intelligence have made it easier to create compelling and sophisticated fake images, videos and audio recordings.

Evaluating Websites - AndySpinks.com C.A.R.S. Checklist for Evaluating Internet Sources You should evaluate every website you use for research or for personal information. Ask yourself the following questions about each site and try to use only those that have the best evidence of credibility, accuracy, reasonableness, and support. How to outsmart fake news in your Facebook feed It doesn't have to be this way. Fake news is actually really easy to spot -- if you know how. Consider this your New Media Literacy Guide. 1. How Photos Fuel the Spread of Fake News During a campaign stop in South Carolina last winter, Hillary Clinton stumbled as she climbed the steps of an antebellum mansion in Charleston. Aides helped her regain her balance in a vulnerable but nondescript moment captured by Getty photographer Mark Makela. He didn’t think much of it until August, when the alt-right news site Breitbart touted it as evidence of Clinton’s failing health. “It was really bizarre and dispiriting to see,” he says. “We’re always attuned to photographic manipulation, but what was more sinister in this situation was the misappropriation of a photo.” Misappropriation and misrepresentation of images helped drive the growth of fake news.