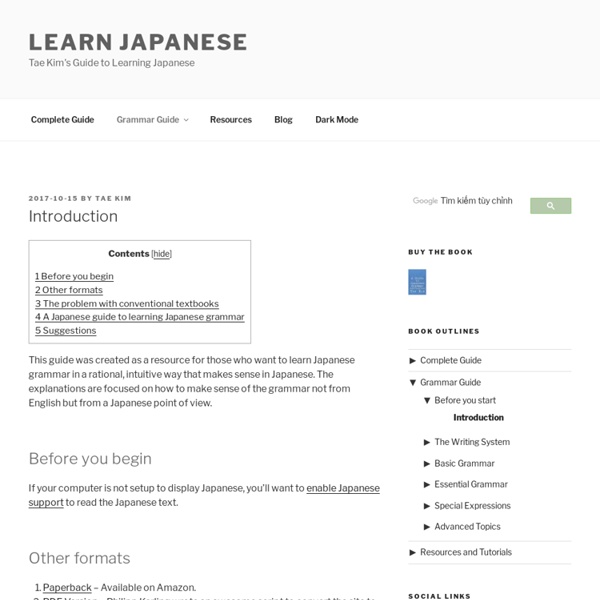 This guide was created as a resource for those who want to learn Japanese grammar in a rational, intuitive way that makes sense in Japanese. The explanations are focused on how to make sense of the grammar not from English but from a Japanese point of view. Before you begin If your computer is not setup to display Japanese, you’ll want to enable Japanese support to read the Japanese text. Other formats Paperback – Available on Amazon.PDF Version – Philipp Kerling wrote an awesome script to convert the site to PDF.iOS app – The guide is now available for iOS devices created by Adam Critchley.Android app – The guide is now available on Google Play created by Ignatius Reza Lesmana. This work is released under a Creative Commons Attribution-Noncommercial-Share Alike License. The problem with conventional textbooks The problem with conventional textbooks is that they often have the following goals. A Japanese guide to learning Japanese grammar Suggestions

Iroha The Iroha (いろは?) is a Japanese poem, probably written in the Heian era (AD 794–1179). Originally the poem was attributed to the founder of the Shingon Esoteric sect of Buddhism in Japan, Kūkai, but more modern research has found the date of composition to be later in the Heian Period.[1] The first record of its existence dates from 1079. Japanese/Grammar/Verbs - Wikibooks, collection of open-content textbooks Japanese verbs, (動詞; どうし), inflect heavily to indicate formality, tense or mood, primarily in their ending. There are two tenses, several levels of formality and three classes of verbs, depending on their inflection. The two tenses are perfective (often considered past tense) and present (or technically, non-past, as the future tense is not indicated). Out of the several levels of formality, two are the most common: plain and polite. Japanese verbs are officially categorised into five classes,[1] but as two of these inflect much the same and another two only contain one verb each, these are usually merged into three when Japanese is taught as a foreign language.

100 top resources to learn Japanese 741 Flares6250116×741 Flares We find ourselves often giving recommendations of products to learn Japanese with, and we thought it’d be useful to compile a list for your reference. We have included a number of our own products, only where we are convinced that they are deserving of their place in the list, and we have included paid and free study resources without discrimination. The list is broken up by category and each item is clearly marked as to what JLPT level it targets. Everything on this list deserves your attention, but resources we’re particularly fond of, the kind we’d use ourselves, are additionally marked with a little star. Japanese textbooks

Complete Guide to Japanese Posted by Tae Kim Disclaimer: This is still a work in progress! What is a complete guide to Japanese? Extensive Reading Material Online Free Japanese Children’s Stories and Fairytales With over 1,000 free Japanese picture books, EhonNavi is like living next to a library! Sign up here, it’s quick and free. (I wrote a walkthrough to help with this part.) Once you’re logged in, click the link on the right that says 全ページ試し読み to see the available books; click a book and find the yellow icon that says the same thing to read it. Famous Haiku Poems - Famous Haiku Examples Below are several famous haiku poems bytraditional haiku poets. Many are very lyrical and beautiful, and are someof the best haiku poems that you can find. Summer night -even the starsare whispering to each other.- Isaa (tweet this haiku poem) Haiku is a very short poem of around 17 syllables overthree lines and is usually taught as a 5 7 5 syllable pattern.

Japanese Cheat Sheet After 2 months of planning and composition (okay, so I did procrastinate quite a bit), I now understand how Moses felt when he descended Mount Sinai with the holy tablets. Behold, Nihonshock’s newly revised and much improved Japanese cheat sheet! This is a “cheat sheet” for the Japanese language. It is an attempt to condense and organize as many of the basic elements of the language onto one sheet of paper as possible. Table of Contents / All Japanese All The Time Dot Com: How to learn Japanese. On your own, having fun and to fluency. -1. For Starters 0.

Light Novels vs Manga reading difficulty? I'm going to recommend that you jump into whatever you want to first. Don't worry about the difficulty - if it is something that you really want to read, you will read it. For decided what kind of Japanese to immerse yourself in, don't follow the i+1 idea. This will definitely lead you down... well, an impossible path. Especially as a beginning it will be impossible to find material with just one new thing per sentence in it. My recommendation is to jump into whatever you want to, and do this:

Example Japanese sentences - JLPT grammar Skip to site navigation Skip to section navigation Skip to content トップページ：日本語 (Japanese) Search site with Google JLPT Guide Japanese Language Proficiency Test Before 2010, there were only 4 levels of the JLPT, and the test agency released official vocabulary and grammar lists. One level was split in two, forming the current N2 and N3 levels. Since then, the test agency has not released vocabulary or grammar lists for either of these levels. As such, the N2 and N3 lists here are formed using things test takers remember and general estimates as to the difficulty of the material, and should not be considered entirely comprehensive. The N5, N4, and N1 material should be rather representative.