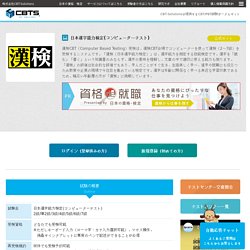 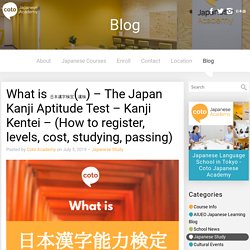 日本漢字能力検定(Nihon kanjinouryoku kentei), usually knowns as 漢検(Kanken) or the Kanji Kentei, is a test that examines the candidate’s kanji skill. It tests on the candidate’s reading and writing ability of kanji as well as the ability to understand and use them in different contexts. Free Japanese study materials l Nihongo library. I provide free Japanese study materials in interactive PDF format. 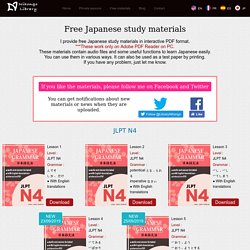 ***These work only on Adobe PDF Reader on PC.These materials contain audio files and some useful functions to learn Japanese easily.You can use them in various ways. KameSame. How I Passed the JLPT N5 and N4 Exams — Geri Draws Japan. [Beginner] Genki VS BunPro - Japanese Language / Resources. Yeah, that’s the right channel if you found it freaky. 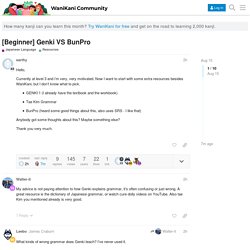 Basically, Curedolly teaches grammar by explaining things from the same perspective that Japanese people learn about grammar in school as natives, as opposed to the typical framing used to teach people who are learners of the language. Personally, beyond just the creepiness, I don’t love how she frames this as something being “hidden” from learners, and she’s revealing “the truth.”

When someone creates learning materials, they do so with the goals of the target audience in mind, and, generally speaking, learners of Japanese do not need the level of detail or viewpoints that natives receive in lessons. Testing the predictive power of phonetic components in Japanese kanji. Most Chinese characters have a phonetic component—a hint that suggests their pronounciations. 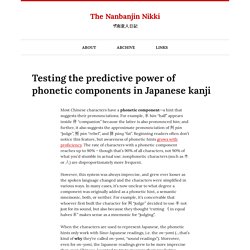 For example, 半 bàn “half” appears inside 伴 “companion” because the latter is also pronounced bàn; and further, it also suggests the approximate pronounciation of 判 pàn “judge”, 叛 pàn “rebel”, and 胖 pàng “fat”. Beginning readers often don’t notice this feature, but awareness of phonetic hints grows with proficiency. The rate of characters with a phonetic component reaches up to 90% – though that’s 90% of all characters, not 90% of what you’d stumble in actual use; nonphonetic characters (such as 木 or 人) are disproportionately more frequent. However, this system was always imprecise, and grew ever looser as the spoken language changed and the characters were simplified in various ways.

In many cases, it’s now unclear to what degree a component was originally added as a phonetic hint, a semantic mnemonic, both, or neither. The Japanese Grammar database. Our Courses - Japan Language Center. Famous Haiku Poems - Famous Haiku Examples. Below are several famous haiku poems bytraditional haiku poets. 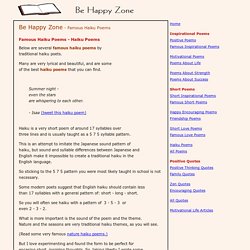 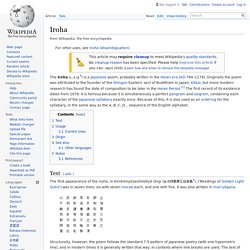 Is a Japanese poem, probably written in the Heian era (AD 794–1179). Originally the poem was attributed to the founder of the Shingon Esoteric sect of Buddhism in Japan, Kūkai, but more modern research has found the date of composition to be later in the Heian Period.[1] The first record of its existence dates from 1079. It is famous because it is simultaneously a perfect pangram and isogram, containing each character of the Japanese syllabary exactly once.

Because of this, it is also used as an ordering for the syllabary, in the same way as the A, B, C, D... sequence of the English alphabet. Japanese Grammar Guide. This guide was created as a resource for those who want to learn Japanese grammar in a rational, intuitive way that makes sense in Japanese. 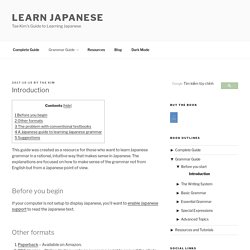 The explanations are focused on how to make sense of the grammar not from English but from a Japanese point of view. Before you begin If your computer is not setup to display Japanese, you’ll want to enable Japanese support to read the Japanese text. Other formats Paperback – Available on Amazon.PDF Version – Philipp Kerling wrote an awesome script to convert the site to PDF.iOS app – The guide is now available for iOS devices created by Adam Critchley.Android app – The guide is now available on Google Play created by Ignatius Reza Lesmana. This work is released under a Creative Commons Attribution-Noncommercial-Share Alike License. Welcome to IMABI! - Learning Japanese. Why Japan Was Called The "Submissive Dwarf Country" 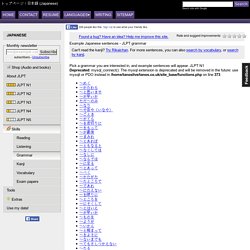 Japanese-Language Proficiency Test: Resources on the JLPT. The following are sources for more detailed information about the test, sample online practice tests, and study materials that are available for purchase. 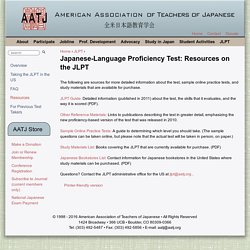 JLPT Guide: Detailed information (published in 2011) about the test, the skills that it evaluates, and the way it is scored (PDF). Other Reference Materials: Links to publications describing the test in greater detail, emphasizing the new proficiency-based version of the test that was released in 2010. Sample Online Practice Tests: A guide to determining which level you should take. (The sample questions can be taken online, but please note that the actual test will be taken in person, on paper.)

To see where the July test is given, please go to the international JLPT site: The 2015 JLPT was given on December 6, 2015. KanjiCards.org. Next -> 日 kun: ひ, -び, -か on: ジツ, ニチ meaning: Japan, counter for days, day, sun words: 一 kun: ひと-, ひと.つ on: イチ, イツ meaning: one, one radical (no.1) words: Japan Tokyo International School. For those with short-term visa & working holiday visa. Tuition Fee 17,000 Yen per 1 Week. (*All included) Study Classes Various courses for various purposes. The class level is determined by the result of level-check test. Accommodation School dormitory 36,000 Yen per Month per Person.

All Kanji - Kanji Web Easy. Thought for the week. Multiple trips to Japan and constant frustration at being unable to read the language has sparked off an unusual typographic project at johnson banks. Earlier in the year we started seeing if we could combine the English language and Japanese script in some way. One of the three typographic styles that is used in Japan is essentially phonetic, and is called Katakana. We’ve been attempting to find ways to incorporate phonetic sounds with the Katakana letterforms. Here’s an example – UNIQLO, in Japanese, is pronounced with four clear syllables, U, Ni, Q, Lo (they’re actually spoken like this, Yoo Nee Koo Roh). There are four katakana used for these sounds. Looks great, but unless you’ve learned the sounds, you’re no wiser. My name, Michael, is usually pronounced Ma Ee Keh Roo, so here it is in Phonetikana.

Here are some more characters. This Font Could Make It Easier To Learn Japanese. Japanese is a notoriously difficult language to learn, particularly for those only used to the Latin alphabet. There are also three different types of writing systems to grapple with: Katakana, Kanji and Hiragana. The eloquent squiggles and stripes might appear alien, but one of these Japanese writing systems, Katakana, is essentially phonetic. To make it a bit easier to learn, British design consultancy johnson banks has developed a typographic style that incorporates both English language and Japanese script – which they call Phonetikana.

They have created a typography incorporating phonetic sounds with the Katakana letterforms. Japanese Kanji. JLPT Level N5 Study Page. 漢字テスト【漢検10級トレーニング】 漢字検定１０級の問題. 漢字検定 10級(小１修了程度：80字)問題テキスト｜無料漢字検定テキスト・ドリル・プリント問題集ダウンロード｜幼児～大人まで. Basic Kanji Book - Vol 1 - Lesson 1 flashcards. Denshi Jisho - Online Japanese dictionary. Template:Katakana table extended. Katakana. Hiragana. 10 grade kanji test (about 1 small completion: 80 characters) problem text. Find kanji by radicals - Denshi Jisho. How To Guess A Kanji's Stroke Order Guide. Although I’m not the type who believes you have to learn to write kanji by hand (who writes by hand nowadays?) There are plenty of people out there who have to do just that for one reason or another. Maybe your teacher is making you… maybe you’re just interested in writing kanji.

Whatever. I’m writing this guide for you so that you don’t have to spend a lot of time fussing around with stroke order. There are general rules and guidelines that you can follow to learn the stroke order of nearly any kanji out there, whether you’ve seen it before or not. KANJIDAMAGE. Yoshida Institute - Learning Kanji.