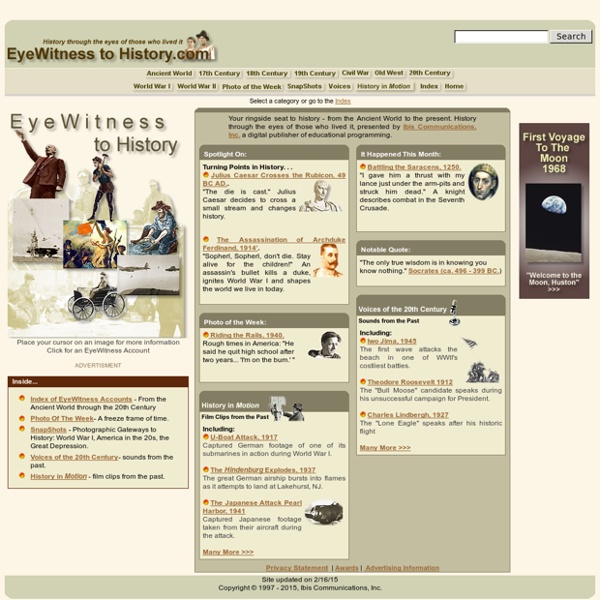 Creative Warm-Up: the Industrial Revolution After a few days of studying the Industrial Revolution, I gave students a warm-up activity to get them using primary sources creatively and putting themselves into that time period. In this activity, students were given a sheet containing two primary sources. There were several different sheets, and students could trade with their neighbors if they didn’t like the one they received. a Program of the National Park Service Featured this month: Civics in America Happy 2016! At the start of this election year, Teaching with Historic Places is highlighting its lessons about Civics in America. These lessons teach government topics and the histories of American citizens taking individual or collective action: from serving in elected office to engaging in philanthropic efforts; from volunteering in a citizens' militia to fighting for basic rights.

New York Public Library Puts 20,000 Hi-Res Maps Online & Makes Them Free to Download and Use When I was a kid, my father brought home from I know not where an enormous collection of National Geographic magazines spanning the years 1917 to 1985. I found, tucked in almost every issue, one of the magazine’s gorgeous maps—of the Moon, St. Petersburg, the Himalayas, Eastern Europe’s ever-shifting boundaries. I became a cartography enthusiast and geographical sponge, poring over them for years just for the sheer enjoyment of it, a pleasure that remains with me today. Whether you’re like me and simply love the imaginative exercise of tracing a map’s lines and contours and absorbing information, or you love to do that and you get paid for it, you’ll find innumerable ways to spend your time on the new Open Access Maps project at the New York Public Library. The NYPL announces the release with the explanation below:

The Educated Teacher Last year my co-teacher and I were a little crunched for time when teaching the interwar years in Europe. We wanted to get across the economic and social problems that Europeans faced and how it influenced the choices they made, so I designed these learning stations to allow students to use primary and secondary sources to discover these facts for themselves. We set up the classroom with the documents (printed from the PowerPoint, attached below) for each station taped to the walls around the room in clusters. Students worked with a partner to complete the questions on their worksheet (included below). The questions included reading graphs, analyzing political cartoons, and using photographs and quotes to find facts and make judgments about what was happening to the German people in the 1930s. The PowerPoint and worksheet can be downloaded here:

European Views of the Americas: 1493-1750 Content Includes: More than 32,000 records Coverage of European exploration and portrayals of Native American peoples Subjects include: British in America Commerce Discoveries Dutch in America French in America Great Britain—Colonies Jesuits (and other religious orders) in America Pirates Slave trade This free historical archive is a comprehensive guide to printed records about the Americas written in Europe before 1750 from European Americana: A Chronological Guide to Works Printed In Europe Relating to the Americas, 1493-1750. Try it now for free. This authoritative bibliography is well-known and respected by scholars worldwide, and a valuable index for libraries, researchers and individuals interested in European works that relate to the Americas. It was co-developed by John Alden and the Curator of European Books at The John Carter Brown Library, Dennis Landis.

Chronology The Turkic speaking Uighurs were one of many distinct cultural groups brought together by the trade of the Silk Route at Turfan in Chinese Central Asia. The Uighurs, primarily pastoral nomads, observed a number of religions including Manichaeism, Buddhism, and Nestorian Christianity. Many of the artefacts from this period were found in the 19 th century in this remote desert region of China. The Seljuks were another Central Asian nomadic group.

West Point Altas Collection About Our Atlases In 1938 the predecessors of today's Department of History at the United States Military Academy began developing a series of campaign atlases to aid in teaching cadets a course entitled, "History of the Military Art." Since then, the Department has produced over six atlases and more than one thousand maps, encompassing not only America’s wars but global conflicts as well. The Great Exhibition The Great Exhibition, housed within the ‘Crystal Palace’, embodied Prince Albert’s vision to display the wonders of industry from around the world. Liza Picard looks at the exhibits, the building and the ideas behind the project. The Crystal Palace