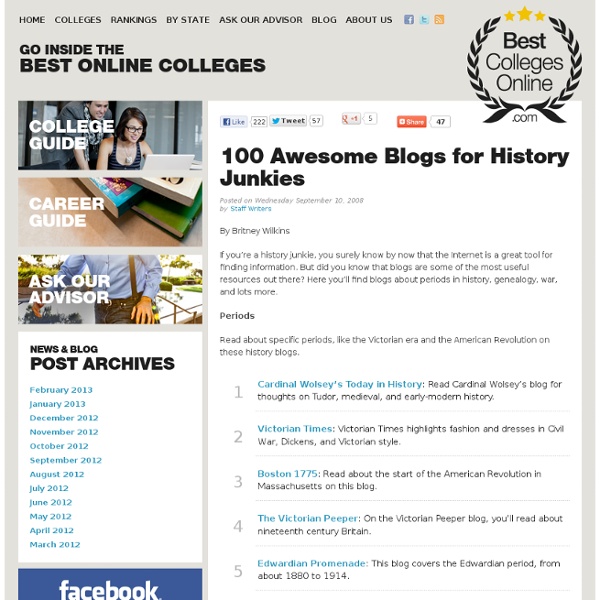 Posted on Wednesday September 10, 2008 by Staff Writers By Britney Wilkins If you’re a history junkie, you surely know by now that the Internet is a great tool for finding information. But did you know that blogs are some of the most useful resources out there? Here you’ll find blogs about periods in history, genealogy, war, and lots more. Periods Read about specific periods, like the Victorian era and the American Revolution on these history blogs. Cardinal Wolsey’s Today in History : Read Cardinal Wolsey’s blog for thoughts on Tudor, medieval, and early-modern history. Art These blogs highlight the history of fine art. Dracula vs. War Read these blogs if you’re interested in the Civil War, soldiers, and World Wars. Civil War History : Read Civil War History to learn about the Civil War, as well as new developments in Civil War history. Day in History These blogs offer a daily look at historical events and people. Religion Read about historical churches and church history in these blogs. Genealogy Related:  World Wide to read

Direct Democracy, 2.0 Angelika Warmuth/DPA, via Agence France-Presse — Getty Images Members of the Pirate Party attended a conference in Neumünster, Germany, last month. I FIRST took real notice of the Pirates last summer during the campaign for city elections in Berlin. German electioneering is quaint, even faintly musty by American standards. “Why am I hanging here anyway?” When the Pirates captured a surprising 9 percent of the vote, I ventured out to their election-night party at a scruffy club in the traditional counterculture neighborhood of Kreuzberg. Though the Pirates are mostly known as a one-issue party advocating Internet freedom, Mr. The idea of electing someone as your proxy for two, four or even six long years may have been a necessity in the days of the American Constitutional Convention, when representatives rode to the capital by horseback. “Written language allowed people to communicate over time, the printing press to reach people en masse,” Mr.

21 Brilliant Productivity Tools Every College Student Must Use: Get Degrees If you ask a college student about productivity, he won't have much to say. And you really can't blame him. He leads a dynamic life where academics and fun go hand in hand, with the latter becoming a more important activity most of the times. However, with the advent of internet and web 2.0, a college student now has access to so many amazing tools that he could finish up his work as well as enjoy life to the fullest without the guilt. The following list mentions 21 such tools which could skyrocket the productivity of college students when it comes to doing research, communicating with fellow students and dealing with assignments. Research and Taking Notes 1.Questia Questia is an excellent online research tool which features a huge web based library of magazines, books, journals, papers, articles and much more. Although you need to pay about $19.95 per month for its membership, you could save on books and magazines you buy if you subscribe to it. 2.Free Book Notes 3.Wikipedia 4.Notely 7.

Runic calendar A Runic calendar (also Rune staff or Runic Almanac) is a perpetual calendar based on the 19 year long Metonic cycle of the Moon. Runic calendars were written on parchment or carved onto staves of wood, bone, or horn. The oldest one known, and the only one from the Middle Ages, is the Nyköping staff from Sweden, believed to date from the 13th century. Most of the several thousand which survive are wooden calendars dating from the 16th and the 17th centuries. A typical Runic calendar consisted of several horizontal lines of symbols, one above the other. Special days like solstices, equinoxes, and celebrations (including Christian holidays and feasts) were marked with additional lines of symbols. The calendar does not rely on knowledge of the length of the tropical year or of the occurrence of leap years. Marks[edit] On one line, 52 weeks of 7 days were laid out using 52 repetitions of the first seven runes of the Younger Futhark. Additional runes[edit] Primstav[edit] Modern use[edit]

The Power Elite Thomas Dye, a political scientist, and his students have been studying the upper echelons of leadership in America since 1972. These "top positions" encompassed the posts with the authority to run programs and activities of major political, economic, legal, educational, cultural, scientific, and civic institutions. The occupants of these offices, Dye's investigators found, control half of the nation's industrial, communications, transportation, and banking assets, and two-thirds of all insurance assets. Facts like these, which have been duplicated in countless other studies, suggest to many observers that power in the United States is concentrated in the hands of a single power elite. The power elite theory, in short, claims that a single elite, not a multiplicity of competing groups, decides the life-and-death issues for the nation as a whole, leaving relatively minor matters for the middle level and almost nothing for the common person. Characteristics of the Power Elite The Public.

The US government should cede territory back to Native Americans | Timothy Snyder Does the federal government mean to cede the territory of the United States back to the Native Americans? The US Citizenship and Immigration Services (USCIS) has altered its mission statement, removing the characterization of America as a “nation of immigrants” in order to emphasize the new goal of “securing the homeland”. Some critics made the point that most citizens are immigrants or their descendants, while others noted that most Americans believed that immigration should remain stable or increase. Yet the problem with the change in language lies deeper. According to our own legal tradition, Americans claim sovereignty over the territory of the US as immigrants, precisely because the territories in question were someone else’s homeland: the Native Americans’. Since our country exists, we don’t ask ourselves how or why. Portugal, Spain, France and England claimed territory by planting a flag, a symbolic action known as “discovery”. … we have a small favour to ask.

7 Keys to Reading Faster Photo by Nathiya Prathnadi Want to read faster? In this article, I’m going to share the lessons I learned that doubled my reading rate, allowed me to consume over 70 books in a year and made me a smarter reader. I’m also going to destroy some speed-reading myths, to show you it isn’t magic but a skill anyone can learn. How I Started Speed Reading My first introduction to the concept of speed reading was from a book, Breakthrough Rapid Reading. More than just words per minute, speed reading helped instill a new passion for reading. Here are a few of the lessons I’ve learned from several years of speed reading: 1. Your eyes don’t actually stay fixed in one spot. Normally, when your eye twitches away, it must relocate in its previous position. The easiest pointer is just the tip of your finger. Note for Advanced Speed-Readers: You can further increase your speed-reading rates by keeping your pointer 1-2cm away from the margins of the text. 2. To me, these arguments miss the point. 3. 4. 5. 6.

Dont Pay for Technology: 25 Freebies for Students Jun 29, 2009 In today's economic climate, paying for technology isn't prudent, and for some students, it isn't even an option. Fortunately, there are plenty of freebies on the web that can help with document creation, research, writing, storage, collaboration, studying and more. Document Creation Zoho Office - Zoho Office is an amazing suite of web-based productivity and collaboration tools. Research and Writing Schoolr - This meta search engine combines other academic search engines to make research faster and more efficient for students. Online Storage and Collaboration ADrive - Offering more than 50 GB of free storage, ADrive is one of the best places to upload and store files online. Study Help and Web-Based Learning Mindpicnic - Mindpicnic is helping to revolutionize the way students learn by providing free courses and study materials online. Miscellaneous Tech Tools