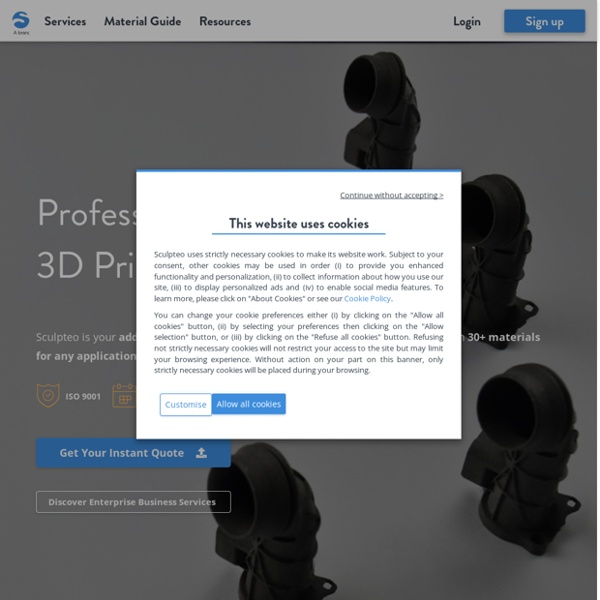 3d modelling software How to start out with 3d printing In the first of the Personal Factory 3d printing tutorial series we’re looking at popular software packages you can use to create your designs. Not all 3d software is created alike – some is intended for creating vast landscapes, others specialise in rendering and visualisation. We’re interested in software focused on both organic & primitive geometry modeling with support for stereo-lithography (.STL) files. Thanks to years of 3d software development there are now many methods to build a 3d models, below are some of the means you may come across…

NEWS FROM THE FUTURE: Reconstruction Sphere Makes Digital Copy of Anything Reconstruction sphere makes a flawless digital copy of anything… @ DVICE - The OrcaM Orbital Camera System will take any object placed into its maw and create a submillimeter accurate 3D model, complete with color, texture, and reflectivity maps. Seven individual cameras orbit around the sphere with the object inside it, taking simultaneous high resolution pictures while different combinations of projected light and shadow are used to help define object geometry. It’s completely automatic, and when OrcaM is done taking pictures, you can pull the original out unharmed along with a perfectly rendered digital copy.

Twin Rail Mobius can-take-a-ball - Pendant by stop4stuff on Shapeways Inspired by the well known mobius strip (discovered by August Ferdinand Möbius in 1858), an interest in the unusual, and 3D modelling, I created the Twin Rail mobius pendant. A half shell and 3 rails form a bearing-like structure to encapsulate a train of 6mm balls in a mind-warping cage with a twisting, fascinating movement bringing to life the only pendent of its kind in the world. Includes a 4mm loop for attaching to a necklace or leather cord. See the photographs with retro-fitted 31 6mm chrome steel ball bearings... in the bottom photo, the balls have been heated until they 'blue'... check out the video to see how they move by clicking on the little icon below the camera above.

An Open Web-based 3D Modeling Program for 3D Print… and More - SolidSmack There are only a few things that get me excited: mild shocks, alligator punching and web-based 3D. I wish I could say the following combined all three, but two outta three ain’t too shabby. Benjamin Nortier from London, UK has done the unthinkable. 968,720+ images: 10 Best sites to get Free Stock Photography You’ve probably spent a lot of time trying to find the best site on the Internet for high-quality free stock images and you have come to the right place. We have done the research and reviewed many websites that offer free stock photos- literally more than 100 of them. We select nothing but the highest quality, highest resolution pictures and add them to our database on a daily basis.

Watch and Learn: There's More Than One Way to Additively Manufacture a Metal Posted by Ray | 22 Aug 2012 | Comments (5) Earlier this week, when I posted a video about 3D-printed bike parts, I was simply too excited about the prospect of digitally fabricating dropouts to concern myself with the technology behind the collaboration between Charge Bikes and EADS. Commenter Modul called me out on my lack of due diligence, piquing my interest in a process known as DMLS, short for Direct Metal Laser Sintering. Had I done my research, I might have dug up commenter Lori Hobson's mention of "DMLS, a process for METAL, even titanium!!!"... in response to a 2008 (!)

Will 3D Printing Reboot Manufacturing? [PICS] Dictionary.com has 17 definitions of the verb “to print,” but none of them conjure up images like the metal cross you see on your right, or other objects such as glass figurines, iPad covers or even shoes — all of which can now be printed with the help of special machines. The process of "3D printing" only loosely corresponds to our common image of printing. It may, however, revolutionize the way we define and interact with manufacturing. Chief among the proponents of this view is The Economist, speculating in a February cover story that the technology “has the potential to transform manufacturing because it lowers the costs and risks,” thus opening it to smaller players. It’s not hard to see this line of logic.