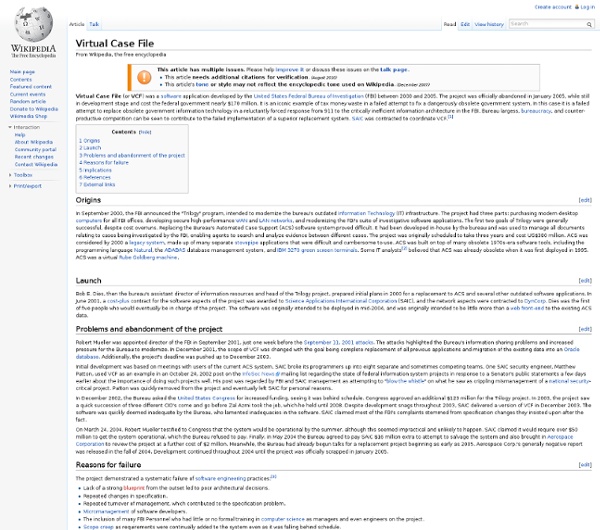 Virtual Case File (or VCF) was a software application developed by the United States Federal Bureau of Investigation (FBI) between 2000 and 2005. The project was officially abandoned in April 2005, while still in development stage and cost the federal government nearly $170 million. In 2006, the Washington Post wrote "In a 318-page report, completed in January 2005 and obtained by The Post under the Freedom of Information Act, [the Aerospace Corporation] said the SAIC software was incomplete, inadequate and so poorly designed that it would be essentially unusable under real-world conditions. Even in rudimentary tests, the system did not comply with basic requirements, the report said. Origins[edit] In September 2000, the FBI announced the "Trilogy" program, intended to modernize the bureau's outdated Information Technology (IT) infrastructure. Launch[edit] Problems and abandonment of the project[edit] Initial development was based on meetings with users of the current ACS system.

Mars Climate Orbiter The Mars Climate Orbiter (formerly the Mars Surveyor '98 Orbiter) was a 338 kilogram (750 lb) robotic space probe launched by NASA on December 11, 1998 to study the Martian climate, atmosphere, surface changes and to act as the communications relay in the Mars Surveyor '98 program, for Mars Polar Lander. However, on September 23, 1999, communication with the spacecraft was lost as the spacecraft went into orbital insertion, due to ground-based computer software which produced output in non-SI units of pound-seconds (lbf×s) instead of the metric units of newton-seconds (N×s) specified in the contract between NASA and Lockheed. The spacecraft encountered Mars on a trajectory that brought it too close to the planet, causing it to pass through the upper atmosphere and disintegrate.[1][2] Mission background[edit] History[edit] The primary science objectives of the mission included:[5] Spacecraft design[edit] Scientific instruments[edit] Mission profile[edit] Launch and trajectory[edit] Notes[edit]

Therac-25 The Therac-25 was a radiation therapy machine produced by Atomic Energy of Canada Limited (AECL) after the Therac-6 and Therac-20 units (the earlier units had been produced in partnership with CGR of France). It was involved in at least six accidents between 1985 and 1987, in which patients were given massive overdoses of radiation, approximately 100 times the intended dose.[2]:425 These accidents highlighted the dangers of software control of safety-critical systems, and they have become a standard case study in health informatics and software engineering. Problem description[edit] The machine offered two modes of radiation therapy: Direct electron-beam therapy, which delivered low doses of high-energy (5 MeV to 25 MeV) electrons over short periods of time;Megavolt X-ray therapy, which delivered X-rays produced by colliding high-energy (25 MeV) electrons into a "target". Root causes[edit] Researchers who investigated the accidents found several contributing causes. See also[edit] Notes[edit]

Why the Mars Probe Went Off Course -- James Oberg By James Oberg SPECTRUM Magazine December 1999 AIRCRAFT ACCIDENT INVESTIGATORS have a special term for a particularl y insidious type of accident--CFIT, or controlled flight into terrain. In the past 40 years, space flight has encountered all sorts of failure modes. Then, on 23 September, through a series of still-baffling errors, flight controllers at the Jet Propulsion Laboratory, a California Institute of Technology facility under contract to NASA, sent erroneous steering commands to the Mars Climate Orbiter as it neared the target planet. NASA assigned three separate teams to investigate the embarrassing, US $125 million debacle and determine its cause. After six weeks, on 10 November, NASA officials released their preliminary findings. As reconstructed by Spectrum, ground controllers ignored a string of indications that something was seriously wrong with the craft's trajectory, ove r a period of weeks if not months. One down, one to go The route planned Momentum wheels and jets