The internet mystery that has the world baffled 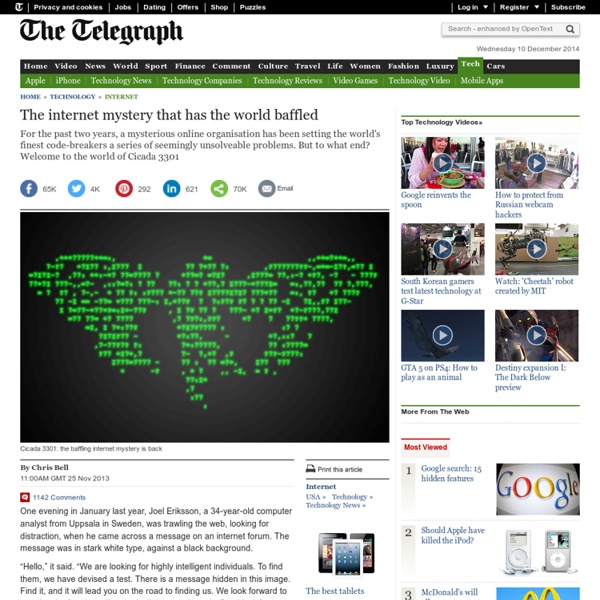 Sleepily – it was late, and he had work in the morning – Eriksson thought he’d try his luck decoding the message from "3301”. After only a few minutes work he’d got somewhere: a reference to "Tiberius Claudius Caesar” and a line of meaningless letters. Joel deduced it might be an embedded "Caesar cipher” – an encryption technique named after Julius Caesar, who used it in private correspondence. Feeling satisfied, he clicked the link. It was a picture of a duck with the message: "Woops! "If something is too easy or too routine, I quickly lose interest,” says Eriksson. Eriksson didn’t realise it then, but he was embarking on one of the internet’s most enduring puzzles; a scavenger hunt that has led thousands of competitors across the web, down telephone lines, out to several physical locations around the globe, and into unchartered areas of the "darknet”. For some, it’s just a fun game, like a more complicated Sudoku; for others, it has become an obsession. GCHQ's 'Can You Find It?' Related:  Communication Systems, Means, & Memes

Time To Move To Hong Kong: U.S. Internet Is Stupidly Slow, Report Finds On the eve of this traditional American holiday, we've got some news that may be obvious to those who've ventured to grandparents' and relatives' houses where the Internet is less-than-speedy: Download speeds in the U.S. suck, a new report confirms. Network diagnostics company Ookla on Tuesday released its most recent country-by-country Internet Service Provider (ISP) "Speed Test" results. According to Ookla's report, the U.S. ranks a mere 31st in the world when it comes to Internet download speeds -- behind much of Europe and Southeast Asia. (Story continues below chart.) Data via Ookla. According to Ookla, the dismal ranking isn't new. Ookla's numbers are relatively consistent with a report released in September 2011 by content delivery service Pando Networks, which ranked the U.S. 26th in the world in Internet download speeds. Interestingly, a more recent report, Akamai's July 2013 "State Of The Internet," ranked the U.S. at a more optimistic 9th place.

LG's HomeChat will let you text your appliances as if they were people LG HomeChat will allow users to issue commands and receive status updates from their smart appliances by texting them and using simple, conversational language Image Gallery (3 images) LG had plenty of eye-catching gadgets at this year's CES, from a massive 105-inch curved 4K display to the bendable G Flex mobile phone, but probably one of the most intriguing new innovations it revealed was the upcoming HomeChat service. Naturally, the service will only work with LG products, but the company seems intent on rolling it out to most of its major home appliances – refrigerators, robotic vacuum cleaners, ovens, washers, dryers, etc. – in the next year. When used in conjunction with the Smart Manager software for refrigerators, HomeChat users will be able to message their fridge from a grocery store to find out what they already have in stock, what they might need, and even if anything is about to expire. Source: LG About the Author Post a CommentRelated Articles

Singularity University plots hi-tech future for humans 2 December 2013Last updated at 19:17 ET By Jane Wakefield Technology reporter Are we moving to an era of highly intelligent robots? Rob Nail walks into the room looking like a Silicon Valley Doctor Who as played by David Tennant - tailored suit, 3D-printed trainers and the Californian twist on the sonic screwdriver, Google Glass. But despite spending most of his days predicting what the future will look like, he doesn't want to become a time lord. "I feel more like a robot," says the chief executive of the Singularity University (SU). He thinks that the gap between humans and robots is closing as biology and silicon increasingly collide. He reels off examples. Bionic eyes that combine a Google Glass device with a tiny electrode in the retina and will be available in the US for partially-sighted people in a few weeks' time. He describes apps for the next-generation Google Glass that will allow users to read the heat maps of people's faces to tell if someone is lying or not. Glowing plants

Best remote desktop apps for iPad: Access your Mac or PC from anywhere! | iMore In search of the best iPad apps that let you access your desktop PC or Mac from anywhere? Let's face it, sometimes as humans we can be forgetful. Ever walked into a meeting and realized that you didn't remember to transfer a document or presentation you needed to your iPad? Or perhaps you forgot to email your finished lab assignment to yourself before leaving your dorm. Remote desktop apps for iPad let you take control of your computer, or someone else's if given permission, in order to view and transfer files while on the go. If you get work done both behind a desk and on your iPad, it's not a bad idea to have a remote desktop app handy. Screens VNC Screens VNC is dead simple to set up and start using. If you want a streamlined remote desktop experience, it doesn't get much better than Screens VNC. $19.99 - Download Now See also: Screens for Mac - $29.99 - Download Now TeamViewer: Remote Control Free - Download Now Splashtop 2 Remote Desktop $19.99 with IAP - Download Now $24.99 - Download Now

The Mom Song Commercial is Brilliant "Now he smells like a man and they treat him like one.". There in a nutshell you have everything you ever wanted to know about the appeal of the Old Spice products. Old Spice is manly and it makes women treat you like a man. A man, not a boy. Yes, dear reader, we're putting the scalpel on the newest goofy Old Spice commercial which has surreal, frumpy and constantly hovering mums lamenting -in song!- how their little boys have changed gears and are on the way to hell on a handbasket because they changed into Old Spice which draws feminine attention in a way not yet dreamed of. Affectionately referred to as "the mom song" the new Old Spice commercial is in my opinion doing everything it sets out to do (which makes it a success): namely drawing the attention span of young males into seeing an old standby with fresh eyes. As my perceptive reader who sent me the clip, Cacio, puts it: "Old spice was, quintessentially, grampa, certainly not something that could appeal to teens.