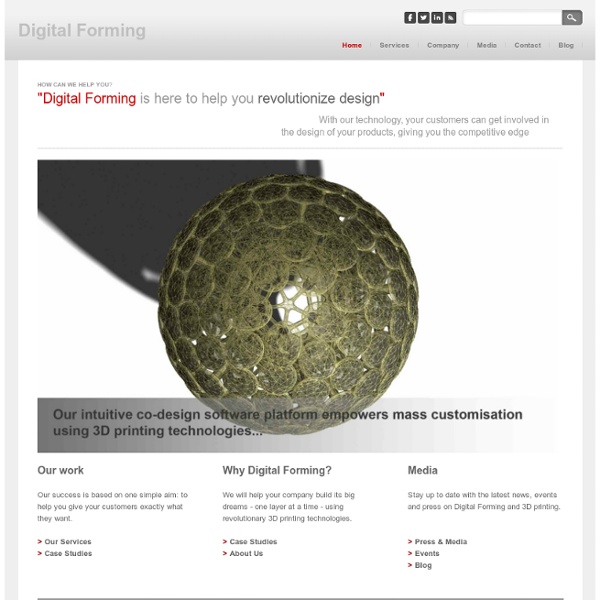 Chocolate 3D Printing The project is funded as part of the Research Council UK Cross-Research Council Programme – Digital Economy and is managed by the Engineering and Physical Sciences Research Council (EPSRC) on behalf of ESRC, AHRC and MRC. It is being led by the University of Exeter in collaboration with the University of Brunel and software developer Delcam. The research has presented many challenges. Chocolate is not an easy material to work with because it requires accurate heating and cooling cycles. These variables then have to be integrated with the correct flow rates for the 3D printing process. Researchers overcame these difficulties with the development of new temperature and heating control systems. Research leader Dr Liang Hao, at the University of Exeter, said: “What makes this technology special is that users will be able to design and make their own products. A consumer- friendly interface to design the chocolate objects is also in development. Dr Hao added:

3D Printers, Rapid Prototyping, Milling Machines, and Service | Purple Platypus Print To 3D Home Grow It 3D 3D Printing & Rapid Prototyping by Objet Geometries Ltd Los Angeles - Rapid Prototyping, 3D Modeling, Tooling An Open Web-based 3D Modeling Program for 3D Print… and More - SolidSmack There are only a few things that get me excited: mild shocks, alligator punching and web-based 3D. I wish I could say the following combined all three, but two outta three ain’t too shabby. Benjamin Nortier from London, UK has done the unthinkable. He’s taken it upon himself to develop a free, parametric 3D modeling program for the browser, whereby combining alligator punching mild shock and web-based 3D. Putting 3D Modeling in the Browser For a breakdown of what inspired Benjamin to take this on, and why other modeling programs are not adequate, you can read his thoughts at his blog. Benjamin’s goals is for a 3D modeler which: is cheap, free or opensourceis parametric and has variables for complex modelshas a productive UI The only thing I’d add to that is cross-platform. There are three components he’s using to make all of this possible: You’ll notice the creation of the geometry is currently all numeric entry. Onto Something Big Benjamin is onto something big here. Via Fabbaloo

3D Printer Success: University of California San Francisco (UCSF) As unhealthy as it may sound, Joe Derisi has a passion for viruses. DeRisi is a professor and vice-chair of the Department of Biochemistry and Biophysics at the University of California San Francisco (UCSF). At his lab, he and his team focus on the cause of malaria and investigate other viruses such as SARS, Avian Flu and others. Winner of a MacArthur “genius” grant, DeRisi is known for his enthusiastic pursuit of new techniques and is responsible for designing and constructing the “ViroChip”, a groundbreaking tool for detecting the presence of all known viruses in only one step. As you might imagine, DeRisi’s line of work requires a high degree of scientific rigor, which translates into substantial lab hours and equipment costs. In order to control these costs, DeRisi started to think about how he might manufacture key pieces of equipment in-house. The uPrint Cure Designed for the desktop, uPrint requires only a 25 x 26 in. footprint and features an 8 x 6 x 6 in. build envelope.

Will 3D Printing Reboot Manufacturing? [PICS] Dictionary.com has 17 definitions of the verb “to print,” but none of them conjure up images like the metal cross you see on your right, or other objects such as glass figurines, iPad covers or even shoes — all of which can now be printed with the help of special machines. The process of "3D printing" only loosely corresponds to our common image of printing. It may, however, revolutionize the way we define and interact with manufacturing. Chief among the proponents of this view is The Economist, speculating in a February cover story that the technology “has the potential to transform manufacturing because it lowers the costs and risks,” thus opening it to smaller players. It’s not hard to see this line of logic. Just picture a local craftsman able to make his own customized bicycle using parts created from his printer. "3D printing will for sure be a new mode of manufacturing," says Peter Weijmarshausen, the CEO of Shapeways, which creates 3D objects for consumers. The Cost