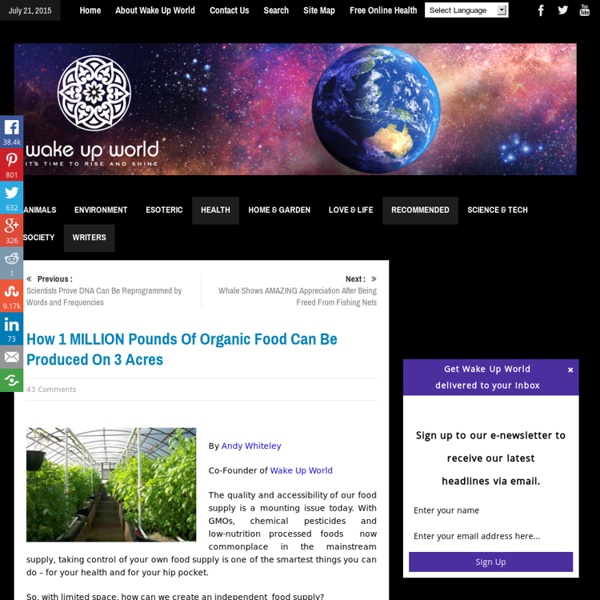 By Andy Whiteley Co-Founder of Wake Up World The quality and accessibility of our food supply is a mounting issue today. With GMOs, chemical pesticides and low-nutrition processed foods now commonplace in the mainstream supply, taking control of your own food supply is one of the smartest things you can do – for your health and for your hip pocket. So, with limited space, how can we create an independent food supply? I recently came across this amazing video of a man, urban farmer Will Allen, who has figured out a self-sustaining system that can grow 1 million pounds of food every year, on just 3 acres of land, using the symbiotic cultivation of plants and aquatic animals in a re-circulating system. If you’re interested in starting your own Aquaponics system in your home, be sure to check out our exclusive special offer to Wake Up World readers at the bottom of this page. Grow 1 Million Pounds of Food on 3 Acres * Maintaining 3 acres of land in green houses * Producing 10,000 fish Growing Power

Eartheasy Blog - StumbleUpon It took over 20 years of gardening to realize that I didn’t have to work so hard to achieve a fruitful harvest. As the limitless energy of my youth gradually gave way to the physical realities of mid-life, the slow accretion of experience eventually led to an awareness that less work can result in greater crop yields. Inspired in part by Masanobu Fukuoka’s book, One Straw Revolution, my family experimented with gardening methods which could increase yields with less effort.

4 Step Guide to Building a Herb Spiral Want to make your own vertical herb spiral garden? This compact space saving design can be made with just a few basic steps. Construction materials and methods vary so after deciding on the best position and gathering your materials, you can have one built the same day. Gardening in a drought Guest post by Mark M. NOTE: This may be something to print out and store in your SurvivalMom Binder for future reference. image by International Center for Tropical Agriculture

Humic Acid's Role in Improving Soil Quality and Plant Growth The term "humus" dates back to the time of the Romans, when it was frequently used to designate the soil as a whole. It was later applied to the organic matter of soils and composts, or to different fractions of this organic matter; as well as, to complexes formed from a variety of natural organic substances. Humus compounds are complex natural organic compounds that are formed in soils from plant residues, by a process of "humification". Humus materials are complex aggregate of brown to dark colored amorphous substances, which have originated during the decomposition of plant and animal residues by microorganisms, under aerobic and anaerobic conditions, in soils, composts, peat bogs, and water basins. "Humic acid " is the commercial term often used to refer to the combined humic and fulvic acid content found in these naturally occurring deposits.

The New Geopolitics of Food - By Lester R. Brown In the United States, when world wheat prices rise by 75 percent, as they have over the last year, it means the difference between a $2 loaf of bread and a loaf costing maybe $2.10. If, however, you live in New Delhi, those skyrocketing costs really matter: A doubling in the world price of wheat actually means that the wheat you carry home from the market to hand-grind into flour for chapatis costs twice as much. And the same is true with rice. If the world price of rice doubles, so does the price of rice in your neighborhood market in Jakarta. And so does the cost of the bowl of boiled rice on an Indonesian family's dinner table. Welcome to the new food economics of 2011: Prices are climbing, but the impact is not at all being felt equally.

How To Grow Hundreds Of Potatoes In One Barrel Want to grow potatoes this year? Lots of them in one barrel? Well, Timothy Hurst shares his simple 4-step method to do just that. -New HOme Project « Leifur Thor’s WorldPress Station Imagine a home that provides a level of comfort and ease of living beyond what’s known. Now imagine this home uses less energy while providing that superior standard of living. In this century, wouldn’t we rather have a home that harvests energy quietly instead of using it? An enclosed space three average people with no special skills can assemble noise free, and with no special building tools in three weeks from start to finish.

How to Make a Seed Bomb The seed bomb is an important part of the arsenal of Guerrilla gardeners all over the world. You too can use it to transform empty plots of land into green habitats of flowers and birds. If you’re afraid that the authorities wouldn’t approve of you digging up the sides of roads in cities, use the seed bomb. Row Covers – Extend Your Growing Season with Dio-Betalon Row covers have been used by farmers for years to extend the season of summer crops and to get their Fall/Winter crops off to a good start. In the video, Protecting Plants From Frost, Tricia demonstrates how to build a low tunnel using PVC pipe covered with the row cover, Agribon. Another product that can be used for a low tunnel or as a floating row cover, is the very durable, Dio-Betalon (similar to Tuffbell).

Sustainable Development Our precious planet "Why use up the forests which were centuries in the making and the mines which required ages to lay down, if we can get the equivalent of forest and mineral products in the annual growth of the hemp fields?" - Henry Ford Sustainable development design systems ensure the Bio diversity and life support for healthy ECO systems. Food Forest Suburb Absolutely FREE videos by Geoff Lawton, World Renowned Permaculture Teacher, Designer and Consultant. In this video we explore an idyllic intentional housing estate created 38 years ago by architect Michael Corbett. Geoff Lawton revisits this 60 acre property to see if nearly four generations later it lives up to its reputation as America’s most forgotten Garden of Eden estate. A place of fruit tree and swales abound in abundance.