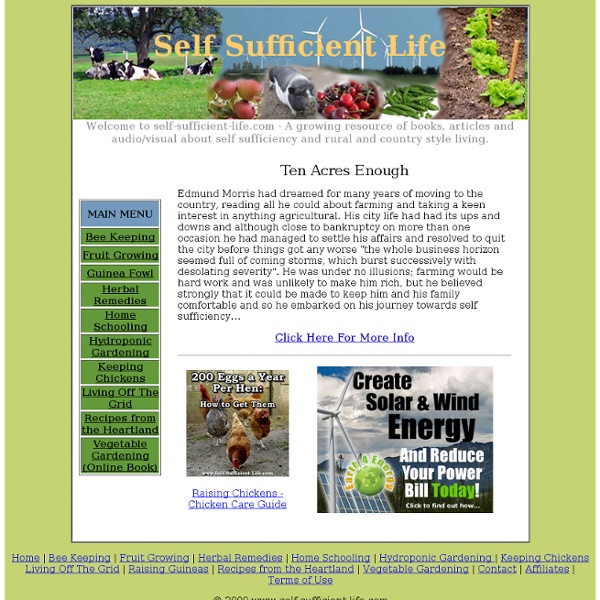 Ten Acres Enough Edmund Morris had dreamed for many years of moving to the country, reading all he could about farming and taking a keen interest in anything agricultural. His city life had had its ups and downs and although close to bankruptcy on more than one occasion he had managed to settle his affairs and resolved to quit the city before things got any worse “the whole business horizon seemed full of coming storms, which burst successively with desolating severity”. He was under no illusions; farming would be hard work and was unlikely to make him rich, but he believed strongly that it could be made to keep him and his family comfortable and so he embarked on his journey towards self sufficiency… Click Here For More Info

The Myth of Self Reliance A mass emailing went out a while back from a prominent permaculturist looking for “projects where people are fully self sufficient in providing for their own food, clothing, shelter, energy and community needs. . .” There it was, the myth of “fully self sufficient,” coming from one of the best-known permaculturists in the world. In most US permaculture circles, the idea that anyone could be self sufficient at anything past a very primitive level was abandoned a while ago, and the softer term “self reliant” replaced it. But even self-reliance is barely possible, and, other than as way of expressing a desire to throw off the shackles of corporate consumerism, I don’t think it’s desirable. I took a Googling cruise around the internet and found that “self sufficient” shows up as a desirable goal on several top permaculture websites.

Building Sustainable Farms, Ranches and Communities This guide is written for anyone seeking help from federal programs to foster innovative enterprises in agriculture and forestry in the United States. Specifically, the guide addresses program resources in community development; sustainable land management; and value-added and diversified agriculture and forestry. Thus, it can help farmers, entrepreneurs, community developers, conservationists, and many other individuals, as well as private and public organizations, both for-profit and not-for-profit.

The urban guide to being self sufficient'ish This is an easy recipe to follow and creates a delightful, if not usual tasting beer. It is very cheap to make and follows a traditionally english recipe. Before hops were widely used in the 17th century all sorts of plant were used to flavor the ale including nettles.(Urtica dioica). It was also thought to help alleviate rheumatic pain, gout and asthma.

The Self Sufficient Blog The Self Sufficient Blog is my mini-journal about self sufficent farm living. It... -- keeps you up-to-date on new information and what others are doing to become more self sufficient. ---New methods and creative approaches to farm living. -- keeps you up-to-date with other postings or news about self sufficient farm living --Join my blog and become more self sufficent by clicking on the orange button to subscribe. How To Make Your Own Homemade Pain Relieving Cream Please Share This Page: Google + stumbleupon tumblr A Man Replaces His Lawn With a Giant Vegetable Garden and No Regrets During the summer, nothing is better than the smell of freshly cut grass. That is, unless, you have a giant vegetable garden growing in the place of your lawn. Instead of turf, this awesome homeowner, user locolukas on Reddit, opted for tomatoes.

Maslow's Hierarchy of Needs Maslow wanted to understand what motivates people. He believed that individuals possess a set of motivation systems unrelated to rewards or unconscious desires. Maslow (1943) stated that people are motivated to achieve certain needs. When one need is fulfilled a person seeks to fullfil the next one, and so on. The earliest and most widespread version of Maslow's (1943, 1954) hierarchy of needs includes five motivational needs, often depicted as hierarchical levels within a pyramid. This five stage model can be divided into basic (or deficiency) needs (e.g. physiological, safety, love, and esteem) and growth needs (self-actualization).

How to Make Magnesium Oil to Improve Sleep and Reduce Stress I’ve written before about how I use magnesium daily and why I feel it is such a vital part of overall wellness . Many people are deficient in this vital mineral that the body uses for hundreds of reactions. Every cell in the body needs magnesium in some way, and it is vital for bone, tooth, muscle and joint health as well as for optimal sleep and stress reduction. Deficiency of magnesium is widespread because many of us have lifestyle factors that actively deplete magnesium such as lack of sleep, excess stress, or alcohol/caffeine/sugar consumption. On top of that, many natural sources of magnesium are becoming depleted (such as the soil due to over-farming and high pesticide use) and water filtration systems remove much of the naturally occurring magnesium in water.

How To Start A 1-Acre, Self-Sustaining Homestead (Mother Earth News) Expert advice on how to establish self-sufficient food production, including guidance on crop rotations, raising livestock and grazing management. Your 1-acre homestead can be divided into land for raising livestock and a garden for raising fruits, vegetables, plus some grain and forage crops. Illustration by: Dorling Kindersley Everyone will have a different approach to keeping a self-sufficient homestead, and it’s unlikely that any two1-acre farms will follow the same plan or methods or agree completely on how to homestead. 10 Reasons to Become Self-Sufficient & 10 Ways to Get There By Michael Edwards and Jeffrey Green Activist Post We are now three to five generations removed from the rural backbone that strengthened America. The world at large has undergone a similar transformation as the promise of easier work has created a migration to big cities. These mega-cities could be seen as an experiment gone awry, as general well-being has declined, with suicide rates increasing across the world. Crowded conditions and economic strife have led to rampant crime, pollution, corporate malfeasance, and a dog-eat-dog type of competition that can be described as a temporary insanity.

600 Reasons Turmeric May Be The World’s Most Important Herb Please Share This Page: Google + stumbleupon tumblr reddit 50 Resources To Help You Become More Self-Sufficient We live in an interdependent world. Although at one time all of humankind lived independently and self-sufficiently, group cooperation allowed for more efficient use of resources when hunting and gathering, raising young, making clothing and tools, and building shelters. Banding together ensured our long-term survival; dividing labor into specialized tasks has helped sculpt today’s modern, globalized society. Because of specialization, we enjoy a high quality of life.

Are You Ready Series: Pandemic Preparedness Let’s cut to the chase, it is very difficult to prepare for epidemics and pandemics especially for those living in close proximity to others. These natural reoccurring disasters tend to occur suddenly and without warning. According to the Center for Disease Control (CDC), serious, deadly contagious disease outbreaks can and do happen.