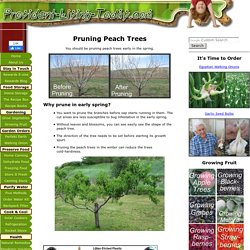 Why prune in early spring? You want to prune the branches before sap starts running in them. The cut areas are less susceptible to bug infestation in the early spring. Without leaves and blossoms, you can see easily see the shape of the peach tree. The direction of the tree needs to be set before starting its growth spurt. Why prune peach trees? Pruning a peach tree opens up the tree and allows sunlight to shine on the fruit. Tools Needed Three different tools come in handy when pruning peach trees. CLONE your FRUIT TREES with these 3 common household items. Backyard aquaponics as self-sustained farm in (sub)urban LA.

PVC Greenhouse Step by Step DIY. A Simple Way To Root Plants From Cuttings. How to revitalize and re-use potting soil. How the Best Worm Castings are Made that Can Double Your Harvest. Worm Towers from 5 gallon buckets. How I Start A New Worm Bin. Verdir la planète - (VPRO Backlight Documentaire - 2012) Permaculture Greening the Desert - Geoff Lawton. Easily Create Your Own New Vegetable and Flower Varieties. Vegetable Seed Saving Handbook Create Your Own Varieties! 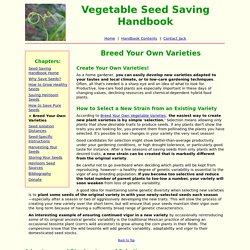 As a home gardener, you can easily develop new varieties adapted to your tastes and local climate, or to low-care gardening techniques. Often, all that's needed is a sharp eye and an idea of what to look for. Productive, low-care food plants are especially important in these days of changing values, declining resources and chemical-dependent hybrid food plants.

How to Select a New Strain from an Existing Variety According to Breed Your Own Vegetable Varieties , the easiest way to create new plant varieties is by simple 'selection.' Explore PFAF.ORG. Food of the Future: Window DIY Spirulina Superfood. How To Grow Hundreds Of Potatoes In One Barrel. Want to grow potatoes this year? 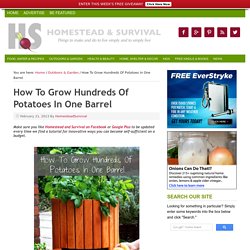 Lots of them in one barrel? Well, Timothy Hurst shares his simple 4-step method to do just that. You can even plant a mixed variety of potatoes so your crop will be diverse. This is Incredible! The Self Watering Grow Bag Grow System! You got to see this! The Underground Hybrid Self Watering Rain Gutter Style Grow System Is Done! Grow Baby Grow! Humic Acid's Role in Improving Soil Quality and Plant Growth. The term "humus" dates back to the time of the Romans, when it was frequently used to designate the soil as a whole. 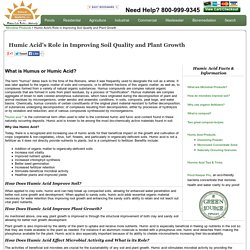 It was later applied to the organic matter of soils and composts, or to different fractions of this organic matter; as well as, to complexes formed from a variety of natural organic substances. Humus compounds are complex natural organic compounds that are formed in soils from plant residues, by a process of "humification". Which is Best When Starting a Garden - Build Existing Soil or Buying Compost ? A Flower Pot That Grows as the Plant Does. Twin sisters Bike and Begum Ayaskan are a design duo with a focus on products and installations. 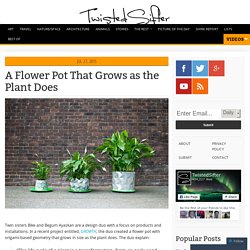 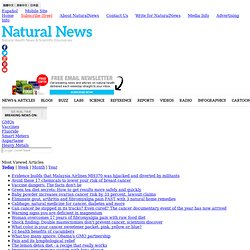 Luckily, this trend is catching on fast, not just in the U.S. but in Europe too. Today there is a waiting list of more 90,000 people attempting to acquire allotments, or plots of land used for small-scale gardening. Applicants are excited to participate in a practice that produces healthy food and is better for the environment. Alpha Galileo, the world's independent source of breaking research news, revealed soil in Britain's allotments was "significantly healthier than intensively farmed soils. " The findings published in the Journal of Applied Ecology, discovered small-scale crop growing in urban areas produced "food sustainability without damaging the soil. 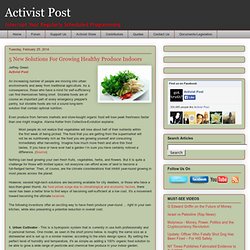 As a consequence, those who have a mind for self-sufficiency can find themselves falling short. Cheap and Simple Hydroponics - The KISS Method. Root Cellars 101 - Root Cellar Design and Use. How to build My 50 Dollar Greenhouse. First off – you really can build this thing very cheaply, but to do so you have to recycle, freecycle, and scrounge. 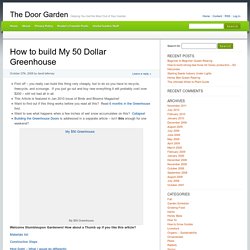 If you just go out and buy new everything it will probably cost over $200 – still not bad all in all.This Article is featured in Jan 2010 issue of Birds and Blooms Magazine! Want to find out if this thing works before you read all this? Read 6 months in the Greenhouse first.Want to see what happens when a few inches of wet snow accumulates on this? The Underground, Year Round, Ever Growing Greenhouse! Make no mistake, the world is coming into major transition and change. 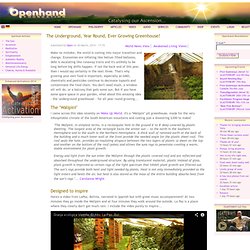 Economies are inflating like helium filled balloons, debt is escalating like runaway trains and it's unlikely to be long before big shifts happen. If not the back end of this year, then I would say certainly in the next three. That's why growing your own food is important, especially as GMO, chemtrails and pesticides continue to decimate topsoils and contaminate the food chain.

Keyhole Gardens. Keyhole Gardens First made popular in Africa, keyhole gardens are catching on in Texas and other hot, dry places. 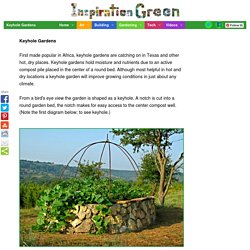 Keyhole gardens hold moisture and nutrients due to an active compost pile placed in the center of a round bed. Although most helpful in hot and dry locations a keyhole garden will improve growing conditions in just about any climate. 10 Interesting Facts About Earthworms. By Roger Di Silvestro As winter draws to a close, gardeners begin their spring migration into the outdoors, leaving winter dens behind and coming into contact with the harbingers of the shifting seasons: shovels, hoes and trowels. Oh, and earthworms. Anyone prone to working the soil knows that upturning the earth exposes these shiny, wigging, pinkish-brownish tubular life forms, sending them thrashing in hasty retreat into the comforting, moist darkness of the soil. Earthworms: A Garden’s Friend or Foe? After the water is gone, the soil is gone, the crops are gone and the superweeds take over, how exactly will Americans feed their families? - NaturalNews.com.

Tuesday, July 08, 2014by Mike Adams, the Health RangerTags: water security, agricultural collapse, mass starvation (NaturalNews) The United States of America, like most modern nations, is a country accelerating towards agricultural collapse followed by mass starvation. At so many levels, its present-day patterns of consumption, resource extraction and environmental exploitation are physically unsustainable. But one area that merits special attention due to its imminent collapse is the subject of water security.

America has historically possessed plenty of water to grow enough crops to feed not only its own citizens but even export substantial quantities of grain to the rest of the world. Building Fertile Soil - Organic Gardening. Building fertile soil means learning how to feed the soil to feed the plants. It's a fundamental axiom of organic gardening and farming, and once you understand what "feeding the soil" means to building fertile soil, you'll also understand why organic methods, and no-till techniques in particular, work so well. Even though you can't see most of it, a complex soil food web lives in your garden; it's teeming with earthworms, mites, bacteria, fungi — all kinds of mostly microscopic, interdependent organisms that release mineral nutrients and create the loose soil structure crops need to thrive.

Beneficial mycorrhizal fungi (see "The Magic of Mycorrhizal Fungi," page 24 in this issue) grow in and around plant roots, mining subsoil for nutrients and water to share with your crops. Other microorganisms prevent diseases and help plants withstand insect attacks. Your crops actually help feed all this underground life.

But this complex, mostly invisible soil ecosystem can be damaged easily. How To Save Money And Do It Yourself! Building Plastic Barrel Root Cellar or Emergency Cache Of Supplies – Video. Tips on how to properly store fruits and vegetables. How to Grow Your Own Food Without Land. Food is Free Project: How to Build a Raised Wicking Bed! Companion Planting. Winter-Sowing 101. How 1 MILLION Pounds Of Organic Food Can Be Produced On 3 Acres. {how to} Cold Storage 101. Organic Gardening Videos. 4 Step Guide to Building a Herb Spiral.

Want to make your own vertical herb spiral garden?