Practical self sufficiency through food skills. 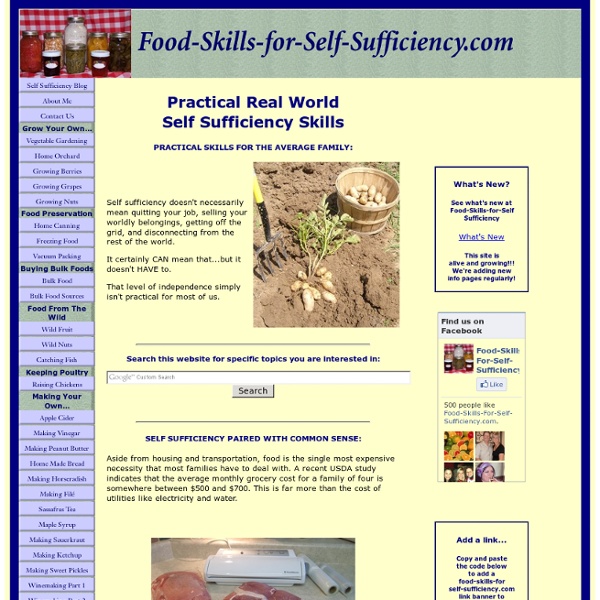 Search for other topics in Food-Skills-for-Self-Sufficiency.com: Self sufficiency doesn't necessarily mean quitting your job, selling your worldly belongings, getting off the grid, and disconnecting from the rest of the world. It certainly CAN mean that...but it doesn't HAVE to. That level of independence simply isn't practical for most of us. Aside from housing and transportation, food is the single most expensive necessity that most families have to deal with. A recent USDA study indicates that the average monthly grocery cost for a family of four is somewhere between $500 and $700.

Build a Barn Greenhouse I have been dying to show you my Mother's Day present. For years and years and years, I've been wanting a greenhouse. Up here in Alaska, the only way you are going to eat cucumbers or tomatoes off the vine is to grow a greenhouse. Or steal from your Mom's greenhouse. The Self Sufficient Blog The Self Sufficient Blog is my mini-journal about self sufficent farm living. It... -- keeps you up-to-date on new information and what others are doing to become more self sufficient. ---New methods and creative approaches to farm living. -- keeps you up-to-date with other postings or news about self sufficient farm living --Join my blog and become more self sufficent by clicking on the orange button to subscribe. The 10 Elements of Our Urban Homestead Jules Dervaes sold his 10 acres in rural Florida and purchased this "fixer-upper" home in the mid-1980s at a reasonable price by California standards. Sorely neglected by years of being occupied by renting tenants and located in a low income neighborhood, the home was in bad need of repair (and, heck... we ain’t kiddin‘... it still does in most places! Just sayin’) and the yard was a combination of broken asphalt, large concreted areas, weeds, Bermuda grass, chalky "adobe-type" soil, and a few rather pathetic “landscape” plants.

Building Sustainable Farms, Ranches and Communities This guide is written for anyone seeking help from federal programs to foster innovative enterprises in agriculture and forestry in the United States. Specifically, the guide addresses program resources in community development; sustainable land management; and value-added and diversified agriculture and forestry. Thus, it can help farmers, entrepreneurs, community developers, conservationists, and many other individuals, as well as private and public organizations, both for-profit and not-for-profit.

A Little Bit of Personality: October 2013 Though I write often about cognition patterns and how thought processes differ between each of the sixteen types, I feel like I haven't really gotten across in full what I mean. And is there any way better to get across concepts simply and efficiently than pictures? I think there is not. Now, I can't make stick people like the greats, and I don't want anyone to think I'm trying. This is just literally the best I can draw :P Well, pretty much... {On an interesting side-note about XKCD, I've noticed web comic writers are often IP's, especially INP's (the author of XKCD being very classically INTP). Free Plans Several free plans by Owen Geiger are now available: Preview the Economizer House Plan here.Economizer House Plan PDF Solar Pit House PDF Preview the Solar Pit House plan here. esert Shelters PDF Preview Desert Shelters by searching this phrase in the built-in search in the right hand column. Craftsman Bamboo/Plastic Bottle House PDF (Honorable Mention in Shelters for All housing competition) Preview the Craftsman plan here.

The Myth of Self Reliance A mass emailing went out a while back from a prominent permaculturist looking for “projects where people are fully self sufficient in providing for their own food, clothing, shelter, energy and community needs. . .” There it was, the myth of “fully self sufficient,” coming from one of the best-known permaculturists in the world. In most US permaculture circles, the idea that anyone could be self sufficient at anything past a very primitive level was abandoned a while ago, and the softer term “self reliant” replaced it. But even self-reliance is barely possible, and, other than as way of expressing a desire to throw off the shackles of corporate consumerism, I don’t think it’s desirable. I took a Googling cruise around the internet and found that “self sufficient” shows up as a desirable goal on several top permaculture websites.

How To Make Your Own Homemade Pain Relieving Cream Please Share This Page: Google + stumbleupon tumblr 30 things you should never compost or recycle Remember the good ol' days — back when we only had one bin for trash? In retrospect, those days were actually more wasteful than good. We sent things to the landfill that might have nourished our yards, and buried them side-by-side with materials that should have been reclaimed and put back in the production chain. Today, most of us have two bins: one for compost and another for recycling. They're great for reducing curbside trash, but not everything is suitable for those bins. We've rounded up 30 things people mistakenly try to compost or recycle.

DIY smart materials The piano box is a (somewhat polyphonic) paper toy synthesizer with 12 keys, each triggering a tone and an LED. The keys are a set of capacitive sensors, made of copper tape, controlled by an Arduino Mega running the ... Last summer a few of us at NYC Resistor made the JelTone, a jello-based toy piano that can be eaten and played. Now, Marianne Cauvard and Raphael Pluvinage created the beautiful Noisy Jelly, a kit to make your own ... noisy jelly :: an agar-based musical game Maslow's Hierarchy of Needs Maslow wanted to understand what motivates people. He believed that individuals possess a set of motivation systems unrelated to rewards or unconscious desires. Maslow (1943) stated that people are motivated to achieve certain needs. When one need is fulfilled a person seeks to fullfil the next one, and so on. The earliest and most widespread version of Maslow's (1943, 1954) hierarchy of needs includes five motivational needs, often depicted as hierarchical levels within a pyramid. This five stage model can be divided into basic (or deficiency) needs (e.g. physiological, safety, love, and esteem) and growth needs (self-actualization).

How to Make Magnesium Oil to Improve Sleep and Reduce Stress I’ve written before about how I use magnesium daily and why I feel it is such a vital part of overall wellness . Many people are deficient in this vital mineral that the body uses for hundreds of reactions. Every cell in the body needs magnesium in some way, and it is vital for bone, tooth, muscle and joint health as well as for optimal sleep and stress reduction. Deficiency of magnesium is widespread because many of us have lifestyle factors that actively deplete magnesium such as lack of sleep, excess stress, or alcohol/caffeine/sugar consumption. On top of that, many natural sources of magnesium are becoming depleted (such as the soil due to over-farming and high pesticide use) and water filtration systems remove much of the naturally occurring magnesium in water.