Leading the transition to a resilient world 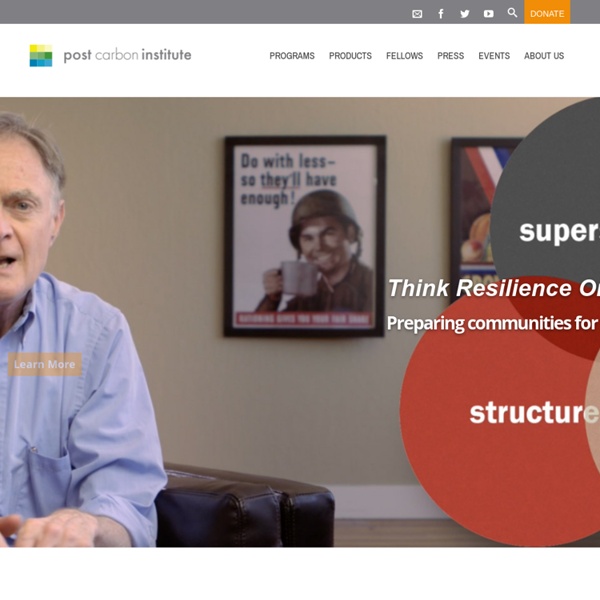 Let It Shine: The First Solar Steam Engine - Renewable Energy The following post summarizes the author’s Chapter 7 of Let It Shine: The 6,000-Year Story of Solar Energy. Alarmed by the prodigious amount of coal consumed as the industrial revolution moved forward, a French mathematics professor, Augustine Mouchot, warned in 1860 that “Eventually industry will no longer find in Europe the resources to satisfy its prodigious expansion…Coal will undoubtedly be used up” He then asked, “What will industry do then?” It must “reap the rays of the sun,” the French professor concluded. The First Solar Machines Mouchot first studied what had already been done in times past to put solar energy to use. Mouchot discovered many fascinating solar machines built over the millennia, beginning with a sun-run siphon developed by Hero of Alexandria in the first-century BCE.

Peak Oil and the Financial Crisis: Where do Oil Prices Fit In? at Oil Price The Financial Times and Wall Street Journal have gone into full crisis mode with live blogs continuously reporting unfolding events. Equity markets are falling and London oil prices have been flirting with $100 a barrel for the first time since February. Talk of recessions, depressions, and even collapse of the euro zone is everywhere. There seems to be general agreement that a Greek debt default is inevitable. This is to be followed by insolvency of many European banks, which in turn will lead to the possibility of debt defaults by Italy and Spain. These countries, of course, are too big to be bailed out by the rest of EU, which is what has everybody worried.

Absorption refrigerator An absorption refrigerator is a refrigerator that uses a heat source (e.g., solar, kerosene-fueled flame, waste heat from factories or district heating systems) to provide the energy needed to drive the cooling system. In the early years of the twentieth century, the vapor absorption cycle using water-ammonia systems was popular and widely used, but after the development of the vapor compression cycle it lost much of its importance because of its low coefficient of performance (about one fifth of that of the vapor compression cycle). Nowadays, the vapor absorption cycle is used only where waste heat is available or where heat is derived from solar collectors. Absorption refrigerators are a popular alternative to regular compressor refrigerators where electricity is unreliable, costly, or unavailable, where noise from the compressor is problematic, or where surplus heat is available (e.g., from turbine exhausts or industrial processes, or from solar plants). Absorption Principles[edit]

“Energy as an Ultimate Raw Material”, Weinberg, 1959 « Energy from Thorium ENERGY as an ultimate raw material, or problems of burning the sea and burning the rocks By Alvin M. Weinberg Alvin Weinberg is director of the Oak Ridge National Laboratory. The talk on which this article is based was presented before a meeting in New Orleans of the Southeastern Section of the American Physical Society on April 10, 1959. Earthtubing for sustainable, passive geothermal heating & cooling Earthtubes (earthtubing) are a most highly recommended low-tech, sustainable, non-electric, zero-energy, geothermal passive solar heating and solar cooling system. Earthtubing utilizes conventional, thin wall plastic sewer drain vent pipe to passively pre-heat your home's fresh air intake with zero-energy consumption. Filtered fresh air enters a series of non-porous pipes embedded around the interior of your home's foundation, absorbing energy from the surrounding soil, moderating the temperature of fresh air intake. When done correctly, air drafts naturally through your earthtubes for a truly sustainable, non-electric, zero-energy, passive geothermal system that perfectly supplements a high thermal mass HTM home's back-up heating and cooling system. Please be careful with earth tube details though... while 'Green architects' are warming to the idea, they are making very elementary mistakes, such as using large diameter concrete culvert pipe for their earth tube air inlet pipes.

Timberline Geodesic Domes The Birch plan is one of our most popular plans for the 35' dome. Totaling almost 2,000 square feet, the Birch features three bedrooms and two baths on two stories. NEW: See a flash movie of a 3D rendering! Sandia Labs investigates new offshore wind turbine designs Albuquerque-based Sandia National Laboratories is conducting comprehensive research into the viability of vertical axis wind turbines (VAWTs) for offshore use. The design, previously considered impractical for large-scale applications, has the potential to transform offshore wind technology, making it a more economically viable energy source. The research is being conducted under a 2011 Department of Energy (DOE) solicitation for advanced rotor technologies for wind power generation in the United States. The US$4.1 million research project began in January of this year and will continue for five years. The first stage will last two years, during which time, several concept designs will be created and run through modern modelling software. In the 1970s and 80s, VAWTs were actively developed as wind power generators, exhibiting simpler designs than their horizontal-axis cousins and proving generally more reliable.

Geodesic Dome Calculator — ByExample.com Our geodesic dome calculator will calculate the length and number of struts for 2V, 3V, and 4V geodesic domes based on the specified radius. It's a useful tool for planning the size of your dome. Radius = 50 feet * Strut lengths are from vertex to vertex. When designing and building a dome strut lengths will have to be reduced if using connectors and will have to be increased if using bolts to connect flattened ends of pipe. To re-calculate the strut lengths enter a new value for the dome's Radius below. Hydraulic Energy Storage Systems - z07054 Hydraulic Energy Storage System Hydraulic energy storage systems store energy by compressing air similar to a battery storing energy in an electric circuit. Existing hydraulic accumulator designs are large and heavy due to the need for two storage tanks and do not have the high energy density needed for many applications.