Britta Riley: A garden in my apartment 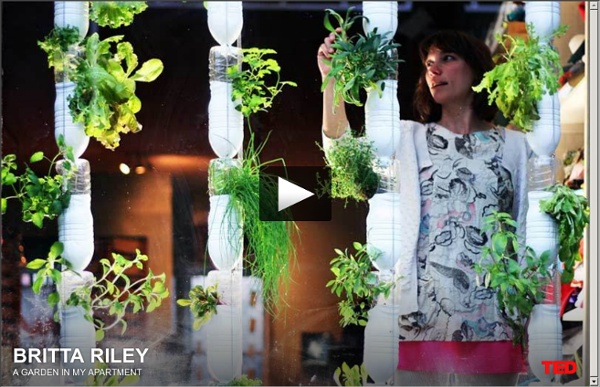 The omnivore's next dilemma: Michael Pollan on TED What if human consciousness isn’t the end-all and be-all of Darwinism? What if we are all just pawns in corn’s clever strategy game, the ultimate prize of which is world domination? Michael Pollan asks us to see things from a plant’s-eye view — to consider the possibility that nature isn’t opposed to culture, that biochemistry rivals intellect as a survival tool. By merely shifting our perspective, he argues, we can heal the Earth. Who’s the more sophisticated species now? Do It With Others - Maker Community Manifesto Maker Faire ® season is here. It is all year long, actually. Thousands of people turn out for large and small events around the world that are oriented at inspiring and enabling makers, hackers, inventors, small business owners, and entrepreneurs. I was on the organizing team for the Kitsap Mini Maker Faire and these events are different than other fairs or festivals or community markets. I’m headed to Los Angeles and plan to attend the OC Mini Maker Faire in Irvine, just for fun.

How to Turn a Pallet into a Garden Good news and bad news. I had planned to film a short video showing you how to make a pallet garden, but the weather didn’t cooperate. I was stapling the landscape fabric onto the pallet when it started drizzling and got really windy. That’s the bad news. But I know I promised a tutorial today, so I took photos and have kept my word to share how to make the pallet garden. Viraj Puri - Gotham Greens owner, Urban Farming New York restaurants and grocers scramble to get their hands on fresh, local produce. So what could be better than veggies grown right in the city? On a rooftop in Brooklyn, Viraj Puri runs Gotham Greens, a hydroponic greenhouse that cultivates delicious, fresh produce — using a fraction of the water and space needed for conventional agriculture. Are you a multidisciplinary mold-breaker? TED2012 Fellowship applications are now open!

Urban gardens: The future of food? - Dream City With penny-farthings, handlebar mustaches and four-pocket vests back in fashion, the rise of urban farming should just about complete our fetish for the late 1800s. Today, you can find chicken coops on rooftops in Brooklyn, N.Y., goats in San Francisco backyards, and rows of crops sprouting across empty lots in Cleveland. That it fits so snugly into the hipster-steampunk throwback trend is what makes urban farming ripe for ridicule. (“Portlandia” has taken a crack or two at it.) But could city-based agriculture ever make the leap from precious pastime to serious player in our cities’ food systems — not just for novelty seekers and committed locavores, but for the Safeway-shopping masses?

NPIN: Native Plant Database Welcome to the latest edition of the Native Plants Database where you can explore the wealth of native plants in North America. Use the options below to search for 7,927 native plants by scientific or common name or choose a particular family of plants. For non-native or introduced species, please visit the USDA Plants Database. Recommended Species lists In the Next Industrial Revolution, Atoms Are the New Bits The door of a dry-cleaner-size storefront in an industrial park in Wareham, Massachusetts, an hour south of Boston, might not look like a portal to the future of American manufacturing, but it is. This is the headquarters of Local Motors, the first open source car company to reach production. Step inside and the office reveals itself as a mind-blowing example of the power of micro-factories. In June, Local Motors will officially release the Rally Fighter, a $50,000 off-road (but street-legal) racer. The design was crowdsourced, as was the selection of mostly off-the-shelf components, and the final assembly will be done by the customers themselves in local assembly centers as part of a “build experience.”

Container Gardening For Urban Apartment Dwellers Think you can’t garden because all you have is a fire escape? Mike Lieberman of Urban Organic Gardener will set you straight in this guest post! Thanks, Mike. It was the Spring of 2009 when I first started urban gardening. Urban Agriculture Casablanca “The project analyses to what extent Urban Agriculture can make a relevant contribution to climate-optimised and sustainable urban development as an integrative factor in urban growth centres. Urban Agriculture is understood as every form of informal or formal agricultural production within a city, whereby in the context of urban growth centres “city” equates to the urban region. As a phenomenon of current megacity-specific development processes, we consider Urban Agriculture to be the whole spatial dimensions and dynamics of the development process in today’s urban growth centres which lead to new hybrid and climate-sensitive forms between rural and urban space. The result is a new form of reciprocal urban-rural linkages which shape the nature of future urban development and living conditions. The mechanisms of land utilisation and land utilisation distribution as influenced by informal developments are key factors affecting these urban-rural linkages.

High-tech greenhouse planned for downtown Vancouver parkade rooftop VANCOUVER -- The roof of a city-owned downtown parkade will be converted to a high-tech vertical growing space capable of producing 95 tonnes of fresh vegetables a year. Vancouver-based Valcent Products has entered into a memorandum of understanding with EasyPark, the corporate manager of the city’s parkades, to build a 6,000-square-foot greenhouse on underutilized space on the roof of the parkade at 535 Richards Street, in the heart of the downtown core. The inside of the greenhouse will be anything but ordinary. Leafsnap, a new mobile app that identifies plants by leaf shape, is launched by Smithsonian and collaborators  The Smithsonian Institution, Columbia University and the University of Maryland have pooled their expertise to create the world’s first plant identification mobile app using visual search—Leafsnap. This electronic field guide allows users to identify tree species simply by taking a photograph of the tree’s leaves. In addition to the species name, Leafsnap provides high-resolution photographs and information about the tree’s flowers, fruit, seeds and bark—giving the user a comprehensive understanding of the species.

Announcing: Emerging Leader Labs: A Social Incubator Running on the Gift Economy image found via pinterest by smallfly It’s an idea whose time has come! Only a little over a month ago, I was sitting at a table with Art Brock & Eric Harris-Braun of the Metacurrency Project, discussing the possibility of launching a new initiative together in the spirit of the “Superhero School” concept many people are currently exploring. The premise is pretty straightforward: There are plenty of passionate, driven people who want to make cool ideas and projects happen. Access to resources (especially, money) is often a large barrier to actualizing them.