Gardening in a drought 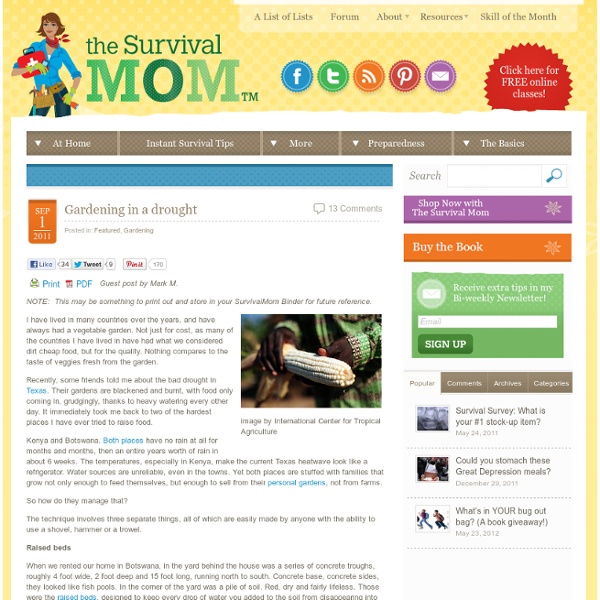 Guest post by Mark M. NOTE: This may be something to print out and store in your SurvivalMom Binder for future reference. image by International Center for Tropical Agriculture I have lived in many countries over the years, and have always had a vegetable garden. Not just for cost, as many of the countries I have lived in have had what we considered dirt cheap food, but for the quality. Nothing compares to the taste of veggies fresh from the garden. Recently, some friends told me about the bad drought in Texas. Kenya and Botswana. So how do they manage that? The technique involves three separate things, all of which are easily made by anyone with the ability to use a shovel, hammer or a trowel. Raised beds When we rented our home in Botswana, in the yard behind the house was a series of concrete troughs, roughly 4 foot wide, 2 foot deep and 15 foot long, running north to south. Shade netting Every 3 feet in the troughs was a hole, just the right size to take a ¾ inch PVC pipe. Thread watering

How to Save Your Seeds I think the practice of saving seeds is due for a revival. Seed saving is rewarding in so many ways. It’s very easy. If you find yourself smitten by it, there are ways you can get more expert about it. Top 10 Most Influential Survival and Preparedness Blogs When it comes to the blogosphere there always seems to be a group of blogs, like individuals, that stand out from the crowd and provide great content and a lot of influence. In the survival and preparedness community this is no exception. In this list I share the top 10 most influential survival and preparedness blogs. Eartheasy Blog - StumbleUpon It took over 20 years of gardening to realize that I didn’t have to work so hard to achieve a fruitful harvest. As the limitless energy of my youth gradually gave way to the physical realities of mid-life, the slow accretion of experience eventually led to an awareness that less work can result in greater crop yields. Inspired in part by Masanobu Fukuoka’s book, One Straw Revolution, my family experimented with gardening methods which could increase yields with less effort. Fukuoka spent over three decades perfecting his so-called “do-nothing” technique: commonsense, sustainable practices that all but eliminate the use of pesticides, fertilizer, tillage, and perhaps most significantly, wasteful effort. Here are the strategies we used which enabled us to greatly increase our garden yield, while requiring less time and less work.

Top Post-Collapse Barter Items and Trade Skills by Brandon Smith by Brandon Smith Alt-Market.com The concept of private barter and alternative economies has been so far removed from our daily existence here in America that the very idea of participating in commerce without the use of dollars or without the inclusion of corporate chains seems almost outlandish to many people. However, the fact remains that up until very recently (perhaps the last three to four decades) barter and independent trade was commonplace in this country.

Mystery, The Pick Up Artist After about ten years of trial and error, Mystery assumingly learned how to talk to women. Not content with being the only Casanova on the planet, he formed his aptly titled "Mystery Method." This eventually led him to start appearing on television. How 1 MILLION Pounds Of Organic Food Can Be Produced On 3 Acres By Andy Whiteley Co-Founder of Wake Up World The quality and accessibility of our food supply is a mounting issue today. Barter items for post teotwawki - SHTF Survival Forum If SHTF tomorrow, 12 months later, what items would you have that you could use for barter? Is bartering even in your plans, have you even thought about it? The other day I was walking through wal-mart and was thinking about low cost, good quality trade items. There is a difference in good quality, medium quality and poor quality barter items.

Survival Food Series: Medicinal Plants for the Survival Garden Plants have been revered through out history for their magical healing powers. In a dire situation where over the counter medicine is no longer available, many will be forced to turn their backs on modern medicine and reacquaint themselves with more homeopathic and natural forms. In this type of situation, many will be turning to alternative medicines to alleviate and assist some of the more chronic health issues such as high blood pressure, menopausal symptoms, migraines, anemia and arthritis. Acquiring books on herbal medicines for a disaster scenario would be a great knowledge source to add to any preparedness library. In the book, Herbal Medicine: The Natural Way To Get Well and Stay Well by Dian Dincin Buchman, Ph.

Barter/Trade Items in a Survival Scenario Imagine a worst-case scenario. It could be hyperinflation—it takes a wheelbarrow of cash to buy a loaf of bread and you no longer have enough money to buy even a small item or piece of food. It could be a nuclear war, a devastating act of terrorism, an EMP attack—banks are shut down, cash is unavailable. Even in more temporary disasters such as an earthquake or a hurricane, cash could become rare or worthless if people are more interested in food and supplies.

How to Make Chicken Stock at Home Chicken Stock- How to Make at Home Two Types of Chicken Stock There are basically two types of chicken stock you can make at home. One is “brown” and the other “white”. The difference is simple. The brown stock is made from roasted chicken bones and the white stock is not.

How to Make a Seed Bomb The seed bomb is an important part of the arsenal of Guerrilla gardeners all over the world. You too can use it to transform empty plots of land into green habitats of flowers and birds. If you’re afraid that the authorities wouldn’t approve of you digging up the sides of roads in cities, use the seed bomb. Or convert inaccessible strips of clay by the side of the road into green havens for tiny living things. All without burning a hole in your pocket. The Most Frequently Overlooked Long-Term Survival Items by Robert Wayne Atkins The Most Frequently Overlooked Items for Long-Term Hard Times Survival Copyright © December 1, 2008 by Robert Wayne Atkins, P.E. All Rights Reserved. One of the suggestions that is frequently mentioned on a variety of internet forums is to purchase "trade or barter items" before the hard times begin.