Corporations Killed Medicine. Here’s How to Take It Back. Along the path toward the creation of a global capitalist system, some of the most significant steps were taken by the English enclosure movement. 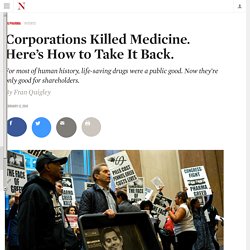 Between the 15th and 19th centuries, the rich and the powerful fenced off commonly held land and transformed it into private property. Land switched from a source of subsistence to a source of profit, and small farmers were relegated to wage laborers. In Das Kapital, Marx described the process by coining the term land-grabbing. To British historian E.P. Thompson, it was “a plain enough case of class robbery.” More recently, a similar enclosure movement has taken place. Many people curse the for-profit medicine industry. The Music Licensing Swamp: Spotify Settles Over Failure To Obtain Mechanical Licenses. A year and a half ago we wrote about a lawsuit, filed by musician/songwriter/Techdirt-hater (with a few perhaps surprising exceptions) David Lowery against Spotify, for failing to pay mechanical licenses. 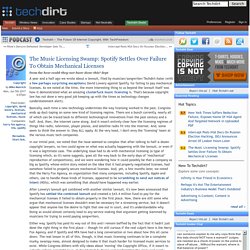 As we noted at the time, the more interesting thing to us beyond the lawsuit itself was how it demonstrated what an amazing clusterfuck music licensing is. That's because copyright law has not done a very good job keeping up with the times as technology changes (understatement alert). How Corporations Killed Medicine. Along the path toward the creation of a global capitalist system, some of the most significant steps were taken by the English enclosure movement. 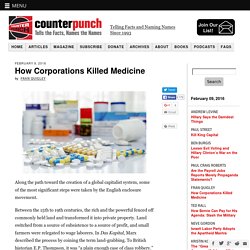 Between the 15th to 19th centuries, the rich and the powerful fenced off commonly held land and transformed it into private property. Land switched from a source of subsistence to a source of profit, and small farmers were relegated to wage laborers. In Das Kapital, Marx described the process by coining the term land-grabbing. To British historian E.P. Hacking the Patent System: Improved, Expanded Guide to Patent Licensing Alternatives. We're pleased to announce the 2016 edition of Hacking the Patent System, a guide to alternative patent licensing produced by the Juelsgaard Intellectual Property & Innovation Clinic at Stanford Law School in partnership with EFF and Engine. 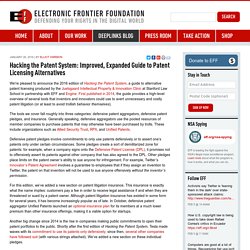 First published in 2014, the guide provides a high-level overview of several tools that inventors and innovators could use to avert unnecessary and costly patent litigation (or at least to avoid trollish behavior themselves). The tools we cover fall roughly into three categories: defensive patent aggregators, defensive patent pledges, and insurance. Generally speaking, defensive aggregators use the pooled resources of member companies to purchase patents that may otherwise have been purchased by trolls. These include organizations such as Allied Security Trust, RPX, and Unified Patents. Defensive patent pledges involve commitments to only use patents defensively or to assert one’s patents only under certain circumstances.

Copyright law shouldn't keep me from fixing a tractor. Photo by oticki/Thinkstock How many people does it take to fix a tractor? 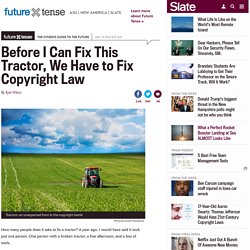 A year ago, I would have said it took just one person. One person with a broken tractor, a free afternoon, and a box of tools. When the repair involves a tractor's computer, it actually takes an army of copyright lawyers, dozens of representatives from U.S. government agencies, an official hearing, hundreds of pages of legal briefs, and nearly a year of waiting. Waiting for the Copyright Office to make a decision about whether people like me can repair, modify, or hack their own stuff. Samsung's SmartTV Disabling its eavesdropping could violate DMCA. Photo by Volt Collection/Shutterstock Samsung’s SmartTV recently came under fire when an item in its privacy policy—in place since at least October 2014—bubbled up in media reports. 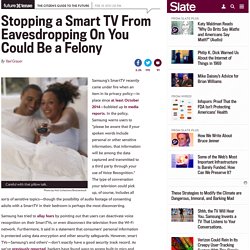 In the policy, Samsung warns users to “please be aware that if your spoken words include personal or other sensitive information, that information will be among the data captured and transmitted to a third party through your use of Voice Recognition.” Sony leaks reveal Hollywood is trying to break DNS, the backbone of the internet. Most anti-piracy tools take one of two paths: they either target the server that's sharing the files (pulling videos off YouTube or taking down sites like The Pirate Bay) or they make it harder to find (delisting offshore sites that share infringing content). 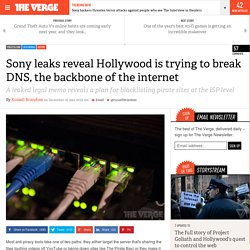 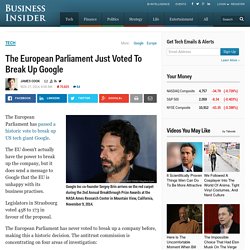 The European Parliament has passed a historic vote to break up US tech giant Google. German Publishers Are 'Afraid Of Google' Google's conflict with European publishers reached a new level on Wednesday as Google agreed to stop publishing extracts and thumbnails from stories published by a group of German publishers who are unhappy with the search engine's dominance in Europe. 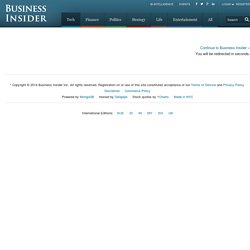 In a blog post published Wednesday, Google explained that search results for stories from some of Germany's biggest websites would be stripped back to just the headline, omitting the thumbnail image and extract that is customary for Google News listings. The change will affect search results from media sites such as bild.de, bunte.de and hoerzu.de, all of them part of the legal case against Google.