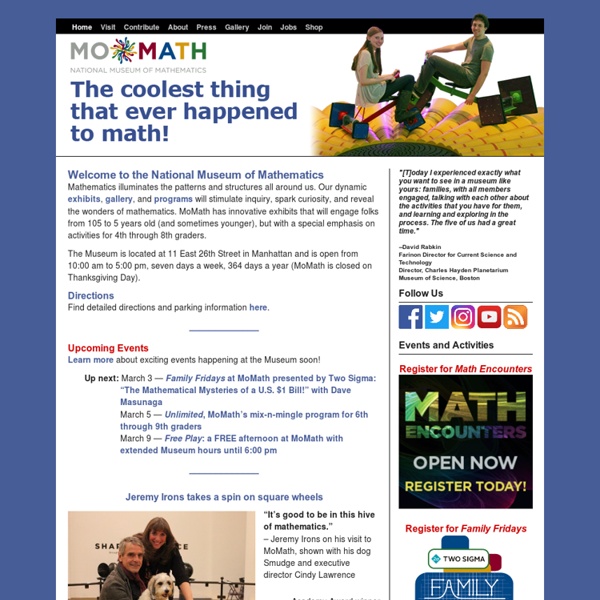 Welcome to the National Museum of Mathematics Mathematics illuminates the patterns and structures all around us. Our dynamic exhibits and programs will stimulate inquiry, spark curiosity, and reveal the wonders of mathematics. MoMath has innovative exhibits that will engage folks from 105 to 5 years old (and sometimes younger), but with a special emphasis on activities for 4th through 8th graders. The Museum is located at 11 East 26th Street in Manhattan and is open from 10:00 AM to 5:00 PM, seven days a week, 364 days a year (MoMath is closed on Thanksgiving Day). Special note: MoMath closes early the first Wednesday of every month, at 2:30 PM.

Hug a tree – the evidence shows it really will make you feel better Written by Shelby Gull Laird We know that trees have many benefits. In forests they provide habitat, wood, biodiversity and ecosystem services. In cities, they can mitigate the urban heat island effect by cooling the air and reducing greenhouse gases. But, perhaps surprisingly, there is increasing evidence that trees are also good for our mental health. History of elementary algebra As a branch of mathematics, algebra emerged at the end of 16th century, with the work of François Viète. Algebra can essentially be considered as doing computations similar to that of arithmetic with non-numerical mathematical objects. However, until the 19th century, algebra consisted essentially of the theory of equations. For example, the fundamental theorem of algebra belongs to the theory of equations and is not, nowadays, considered as belonging to algebra. This article describes the history of the theory of equations, called here "algebra", from the origins to the emergence of algebra as a separate area of mathematics. Etymology[edit]

Hug a tree – the evidence shows it really will make you feel better We know that trees have many benefits. In forests they provide habitat, wood, biodiversity and ecosystem services. In cities, they can mitigate the urban heat island effect by cooling the air and reducing greenhouse gases. But, perhaps surprisingly, there is increasing evidence that trees are also good for our mental health. Are we all tree-huggers? Trachtenberg system The Trachtenberg system is a system of rapid mental calculation. The system consists of a number of readily memorized operations that allow one to perform arithmetic computations very quickly. It was developed by the Russian Jewish engineer Jakow Trachtenberg in order to keep his mind occupied while being held in a Nazi concentration camp.

Why a walk in the woods really does help your body and your soul Have you ever wondered why you feel healthier and happier when you stroll through the trees or frolic by the sea? Is it just that you’re spending time away from work, de-stressing and taking in the view? Or is there more to it? For more than 20 years, scientists have been trying to determine the mechanisms by which exposure to biodiversity improves health. Japanese scientists pioneered the search when they travelled to the island of Yakushima, famous for its biodiversity. This is the story of the late Jakow Trachtenberg, and how to scam people using your mathematical tricks. The Jedi Mind-Trick It's time for another little diversion. Let's look at an easy way to subtract nine. Most people work out that you first subtract 10, then add one. But my brain sometimes gets a bit lost, forgetting to add the right way – not being sure of the answer, needing to re-work the logic. It's all a mind-trick.

A Melbourne Natural Playground Named Australia’s Best Playground A Melbourne children's playground designed to encourage risk-taking - through rocky outcropped terraces and lofty climbing ropes - has been crowned the nation's best. It is known as Nature Play and sits in Royal Park, next to the Royal Children's Hospital. It was designed to help kids - inner city ones especially, who were spending so little time in nature - find an element of unpredictable play. And it was that unpredictability, among other things, that swayed the Australian Institute for Landscape Architects to award it the nation's best playground. "The idea," says its principal landscape architect Skye Haldane, "was to provide the opportunity to take risks". "That gives [kids] confidence to do more.

Beatrix Potter, Mycologist: The Beloved Children’s Book Author’s Little-Known Scientific Studies and Illustrations of Mushrooms by Maria Popova “Imagination is the precursor to policy, the precondition to action. Imagination, like wonder, allows us to value something.” Beatrix Potter (July 28, 1866–December 22, 1943) is one of the most beloved and influential storytellers of all time. The Tale of Peter Rabbit and her other gloriously illustrated children’s books tickle the human imagination through the fantastical aliveness of nature and its creatures, in a spirit partway between Aesop and Mary Oliver, between Tolkien and Thoreau.