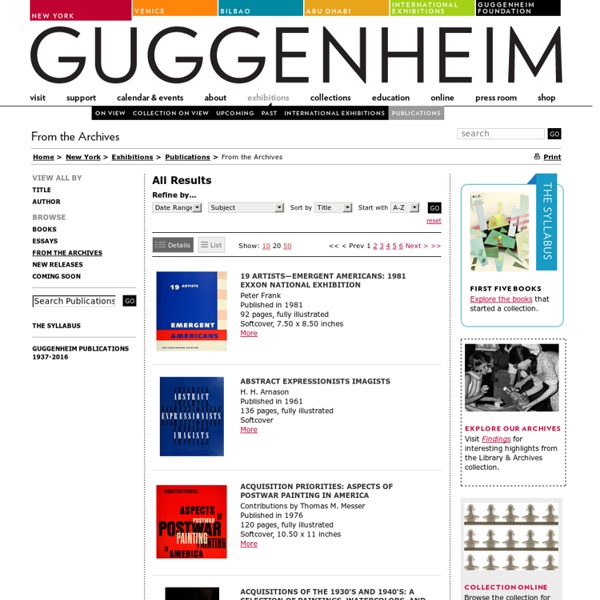 Trippy Fractals Capture The Kaleidoscopic Beauty Of Architecture A skillfully designed building is a work of art on its own. But imagine if you break that architectural image into a dozen pieces and reconstruct it as a kaleidoscopic pattern. Now you've got yourself a fractal masterpiece. From the Archives China: 5,000 Years, Innovation and Transformation in the Arts Contributions by Helmut Brinker, James Cahill, Elizabeth Childs-Johnson, Patricia Ebrey, Sherman Lee, and Zhang Wenbin Published in 1998 504 pages, fully illustrated English and Spanish editions The exhibition China: 5,000 Years, Innovation and Transformation in the Arts opened at the Solomon R. Guggenheim Museum in early 1998 and traveled to the Guggenheim Museum Bilbao in the same year. It was one of the first exhibitions held in the newly opened Guggenheim Museum Bilbao, and marks the Guggenheim Foundation's dedication to the study and exhibition of Asian art. The catalogue accompanying the exhibition is an invaluable resource for scholars of Chinese culture and art.

MetPublications - Full text books online "The 1688 Paradise Lost and Dr. Aldrich": Metropolitan Museum Journal, v. 6 (1972) Boorsch, Suzanne (1972) 20th-Century Art: A Resource for Educators Paul, Stella (1999) 82nd & Fifth The Metropolitan Museum of Art (2013) Guggenheim Collection Online Featuring nearly 1600 artworks by more than 575 artists, the Collection Online presents a searchable database of selected artworks from the Guggenheim’s permanent collection of over 7,000 artworks. The selected works reflect the breadth, diversity, and tenor of the Solomon R. Guggenheim Foundation’s extensive holdings from the late 19th century through the present day, and are continually expanded to include a larger representation of the museum’s core holdings as well as recent acquisitions.

A Tool For Finding Free Vectors, Stock Photos And PSD Files That You Need Time is one of the most important elements of life that we have or, better said, don’t have enough of. That means that any tool that has the function of reducing your workload should be considered a blessing. However, most of the tools that you find online are not free and, moreover, they are so expensive that most people don’t even consider them as options.

Ebooks Living with food restrictions? You can still have delicious, varied meals that anyone would be happy to share! Enjoy breakfasts, desserts, or holiday meals, all without sugar, gluten, eggs or dairy! Digital learning resources // National Film and Sound Archive, Australia NFSA Digital Learning combines the former Screen Australia Digital Learning websites and NFSA’s online education resources. These content rich education websites feature thousands of video and audio clips available for streaming and downloading. Twelve Canoes A portrait of the history, culture and place of the Yolngu people. Ceremony The vital role of ceremony in the Yolngu culture.

Search Engines:Digital Libraries From Topical Search Wiki General Resources digital libraries Aggregators Salvador Dalí’s 100 Illustrations of Dante’s The Divine Comedy In 1957, the Italian government commissioned Salvador Dalí to paint a series of 100 watercolor illustrations of Dante’s Divine Comedy, the greatest literary work written in the Italian language. The illustrations were to be finished by 1965, the 700th anniversary of the poet’s birth, and then reproduced and released in limited print editions. The deal fell apart, however, when the Italian public learned that their literary patrimony had been put in the hands of a Spaniard. Undeterred, Dalí pushed forward on his own, painting illustrations for the epic poem that collectively recount Dante’s symbolic travels through Hell, Purgatory and Heaven.

DIY Geometric Necklace Pendant Happy New Year! I hope everyone had a wonderful time celebrating. I actually made it until midnight...I was pretty proud of myself :) 2012 is going to be amazing...I just know it! I want to kick off the new year with a fun DIY that I have been wearing recently.