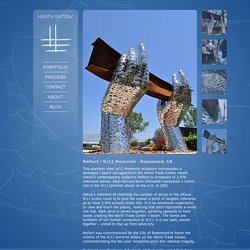 Heath Satow's contemporary sculpture Reflect is composed of 2,976 individual pieces. Each stylized dove silhouette represents a victim lost in the 9/11 terrorist attack on the U.S. in 2001. Satow's intention of matching the number of doves to the official 9/11 victim count is to give the viewer a point of tangible reference as to what 2,976 actually looks like. It is an emotional experience to view and touch the pieces, realizing that each represents a loved one lost. Reflect was commissioned by the City of Rosemead to honor the victims of the 9/11 terrorist attack on the World Trade Center, commemorating the ten year milestone since this national tragedy. 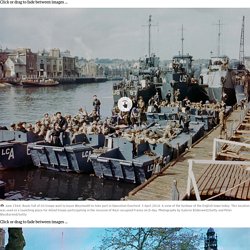 June 1944: Boats full of US troops wait to leave Weymouth to take part in Operation Overlord. 5 April 2014: A view of the harbour of the English town today. This location was used as a launching place for Allied troops participating in the invasion of Nazi-occupied France on D-day. Photographs by Galerie Bilderwelt/Getty and Peter Macdiarmid/Getty. Wind Talkers: Navajo Code Talkers in WWII - CASUALTIES AT SAIPAN. This photo, taken by a member of the U.S. 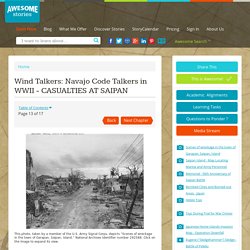 Army Signal Corps, depicts “Scenes of wreckage in the town of Garapan, Saipan, Island.” National Archives Identifier number 292588. Click on the image to expand its view. At 4:15 p.m. Saipan time, on July 9th, the island was officially declared "secured. " The Saipan casualty toll was stunning: News that Saipan had been lost to the Allies shocked the Japanese government. General Holland Smith declared that the victory on Saipan "opened the way to the home islands. " Wind Talkers: Navajo Code Talkers in WWII. A Happy Surprise: Discovering Hollely Bros. Clothing. My first visit to the Hollely Bros. 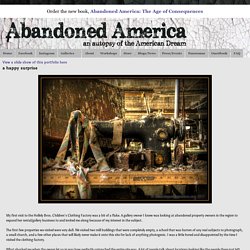 Children's Clothing Factory was a bit of a fluke. A gallery owner I knew was looking at abandoned property owners in the region to expand her rental/gallery business to and invited me along because of my interest in the subject. The first few properties we visited were very dull. We visited two mill buildings that were completely empty, a school that was barren of any real subjects to photograph, a small church, and a few other places that will likely never make it onto this site for lack of anything photogenic.

I was a little bored and disappointed by the time I visited the clothing factory. What shocked me when the owner let us in was how perfectly untouched the entire site was. I quickly made arrangements to revisit the factory as we were running short on time. The factory still stands, but when I returned two years later with a friend I knew I could trust never to reveal its whereabouts and whom I owed a favor to, I made an unfortunate discovery. Edward Curtis - Shadow Catcher. By George Horse Capture Beginning in 1900 and continuing over the next thirty years, Edward Sheriff Curtis, or the “Shadow Catcher” as he was later called by some of the tribes, took over 40,000 images and recorded rare ethnographic information from over eighty American Indian tribal groups, ranging from the Eskimo or Inuit people of the far north to the Hopi people of the Southwest. 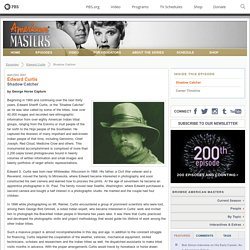 He captured the likeness of many important and well-known Indian people of that time, including Geronimo, Chief Joseph, Red Cloud, Medicine Crow and others. This monumental accomplishment is comprised of more than 2,200 sepia toned photogravures bound in twenty volumes of written information and small images and twenty portfolios of larger artistic representations. ​Passage: The last of the Code Talkers. PFC Preston Toledo and PFC Frank Toledo, both Navajo Indians, relay radio communications in their native tongue in the South Pacific, July 7, 1943. 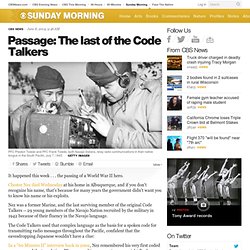 Getty Images It happened this week . . . the passing of a World War II hero. Chester Nez died Wednesday at his home in Albuquerque, and if you don't recognize his name, that's because for many years the government didn't want you to know his name or his exploits. Normandy Invasion, June 1944. On 6 June 1944 the Western Allies landed in northern France, opening the long-awaited "Second Front" against Adolf Hitler's Germany. 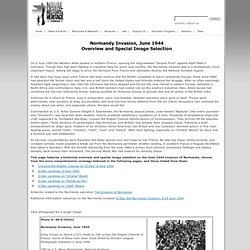 Though they had been fighting in mainland Italy for some nine months, the Normandy invasion was in a strategically more important region, setting the stage to drive the Germans from France and ultimately destroy the National Socialist regime. It had been four long years since France had been overrun and the British compelled to leave continental Europe, three since Hitler had attacked the Soviet Union and two and a half since the United States had formally entered the struggle.

After an often seemingly hopeless fight, beginning in late 1942 the Germans had been stopped and forced into slow retreat in eastern Europe, defeated in North Africa and confronted in Italy. NMNH - Virtual Tour.