Kimbell Art Museum. Cidade das Artes. Cidade das Artes is located between sea and mountain, in the center of a fourteen kilometers plain that saw the recent development of the new major district of Rio de Janeiro: Barra da Tijuca. 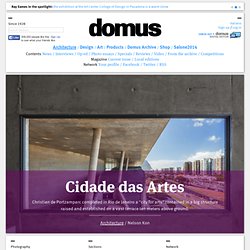 Christian de Portzamparc, Cidade das Artes, Rio de Janeiro, Brasil The landscape is monotonous, without any urban marks or public spaces. The site is structured by two highways that cross the district. In the centre of this cross, designed by Lucio Costa, Cidade das Artes will be in the very heart of the new district. The building is a little city contained in a big structure raised and established on a vast terrace ten meters above the ground, overlooking the mountain and the sea, floating upon a public park a tropical garden and a pond, draw by Fernando Chacel. This terrace is the public space; it is the gathering place that gives access to all facilities. Cidade das Artes can be seen as a large house, a great veranda above the city, homage to an archetype of Brazilian architecture. The most incredibles Museums around the world - Part 2. The most incredibles Museums around the world - Part 1. AD Classics: Vitra Design Museum and Factory / Frank Gehry.

An independent private foundation, the Vitra Museum was founded in 1989 by the CEO Rolf Fehlbaum. 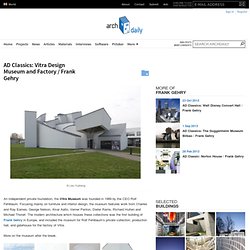 Focusing mainly on furniture and interior design, the museum features work from Charles and Ray Eames, George Nelson, Alvar Aalto, Verner Panton, Dieter Rams, Richard Hutten and Michael Thonet. The modern architecture which houses these collections was the first building of Frank Gehry in Europe, and included the museum for Rolf Fehlbaum’s private collection, production hall, and gatehouse for the factory of Vitra. More on the museum after the break. Easily recognizable as the architectural style of Frank Gehry, the deconstructive sculptural building differs only slightly than his usual designs in that he limits his materials to white plaster and a titanium-zinc alloy. 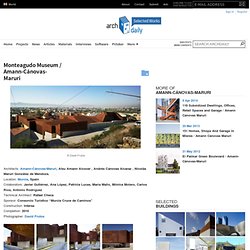 It constitutes the first phase of a project that should improve access to the castle of Monteagudo, restoring it to become a place visited and fundamentally safe. The slope of the mountain is a land historically occupied since prehistoric remains of structures and materials from the world Argaric until today, through the Roman and Arab civilization. In particular the site chosen for the Visitors Center is a village Argaric in a good state of preservation and a Roman site. Deutsche Guggenheim Museum - Exhibition.

Comprising thousands of items of detritus the artist has gathered at two sites—a playing field near his home in New York and a protected coastal biosphere in Baja California Sur, Mexico, that is also the repository for flows of industrial and commercial waste from across the Pacific Ocean. 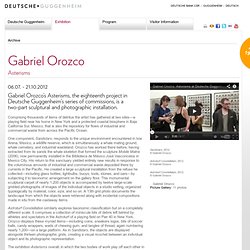 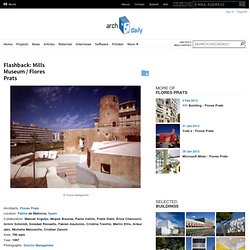 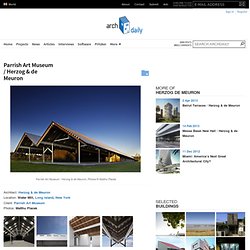 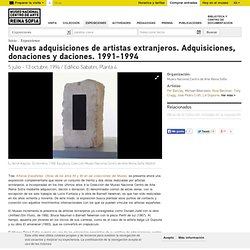 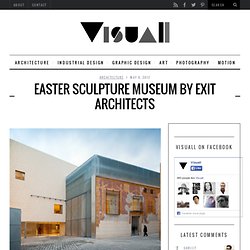 The rules of the competition considered refurbishment of the old Casa del Conde house and construction an extension on the plot area which had been earlier occupied by some small service buildings of the house. EXIT ARCHITECTS’ winning proposal included completely refurbished Casa del Conde as a part of the museum. Salvador Dali Museum / HOK. This week marked the grand opening for the Salvador Dali Museum in St. 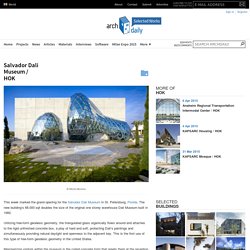 Petersburg, Florida. The new building‘s 68,000 sqf doubles the size of the original one storey warehouse Dali Museum built in 1982. Utilizing free-form geodesic geometry, the triangulated glass organically flows around and attaches to the rigid unfinished concrete box, a play of hard and soft, protecting Dali’s paintings and simultaneously providing natural daylight and openness to the adjacent bay. This is the first use of this type of free-form geodesic geometry in the United States. Mesmerizing visitors within the museum is the coiled concrete form that greets them at the reception desk. If you are a frequent ArchDaily reader you may recall our updates on the Salvador Dali Museum. Restoration Of The Palais Des Gouverneurs Museum / Daniel Cléris & Jean-Michel Daubourg. 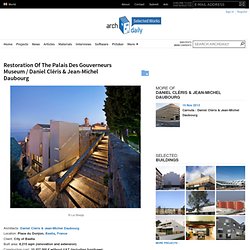 Tadao Ando - Modern Art Museum of Fort Worth. Architect: Tadao Ando Location: Fort Worth, Texas, United States Site Architect: Kendall-Heaton AssociatesLandscape Architect: SWA Group Structural Engineer: Thornton-Tomasetti/Ellisor-Tanner Engineers Contractor: Linbeck Construction Corp. Project Area: 10.96 acres Project Year: 2002 Photographs: Liao Yusheng “Space will only have a life when people enter it. So the important role architecture can play, and that space plays within that architecture, is to encourage an interaction between people, between people and the ideas being presented in the paintings and sculpture, and most importantly between people themselves.”

The tile used for façade is made of local material and worked on in a traditional method of this region, to pay tribute to Taoism that emphasizes on nature and balance. Tile is hung and floated in the air by wire to be released from its weight (and gain lightness). Clad in breathing façade of particles, the architecture is merged into its surrounding nature. Yusuhara Wooden Bridge Museum / Kengo Kuma & Associates. Architects: Kengo Kuma & Associates Location: 3799-3 Taro-gawa Yusuhara-cho, Takaoka-gun, Kochi Prefecture, Japan Client: Tomio Yano, Town Mayor of Yusuhara Site area: 14,736.47 sqm Completion: 2011 Photographs: Takumi Ota Photography This is a plan to link two public buildings with a bridge-typed facility, which had been long separated by the road in between.

Main idea of Beautour center is to glorify the historical Georges Durand’s mansion (a Vendean naturalist, 1886 – 1964) who got important collections. Man of rights, he quickly developped a passion for natural sciences. For 70 years, he collected plants and insects from all over Europe, with the help of his friends and fellow scientists. This is how he has been able to collect nearly 5.000 birds, 150.000 butterflies and insects, and numerous herbariums. Context Biodiversity. Hiroshi Senju Museum / Ryue Nishizawa. Iwan Baan, who has photographed many well-known architectural works, many which have been featured on ArchDaily, recently shot the Hiroshi Senju Museum, designed by Tokyo based architect Ryue Nishizawa who won the Pritzker Prize in 2010 and is known for his works of various scales throughout Japan..