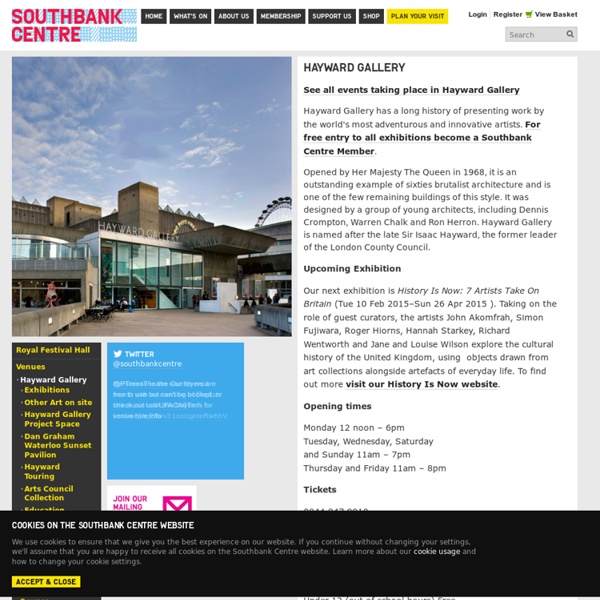 See all events taking place in Hayward Gallery Hayward Gallery has a long history of presenting work by the world's most adventurous and innovative artists. For free entry to all exhibitions become a Southbank Centre Member. Opened by Her Majesty The Queen in 1968, it is an outstanding example of sixties brutalist architecture and is one of the few remaining buildings of this style. It was designed by a group of young architects, including Dennis Crompton, Warren Chalk and Ron Herron. Hayward Gallery is named after the late Sir Isaac Hayward, the former leader of the London County Council. Upcoming Exhibition Our next exhibition is History Is Now: 7 Artists Take On Britain (Tue 10 Feb 2015–Sun 26 Apr 2015 ). Opening times Monday 12 noon – 6pm Tuesday, Wednesday, Saturday and Sunday 11am – 7pm Thursday and Friday 11am – 8pm Tickets Prices include a small voluntary donation in support of Hayward Gallery. Book Tickets Groups Supporting Southbank Centre Related:  Museums & Galleries

Home | Institute of Contemporary Arts Open House London Home of Charles Darwin (Down House) With its unique place in the history of science, Down House, the home of Charles Darwin, is one of the major visitor attractions in the South East. See the study where Darwin wrote 'On the Origin of Species', still as it was when he worked here, and stroll through the extensive gardens that so inspired the great scientist. Equally fascinating are the glimpses you get into the life of the Darwins in the family rooms. And there’s an exciting interactive multimedia tour, narrated by David Attenborough, to tell you more about how Darwin developed his ideas. For anyone with an interest in science and evolution, this is a fascinating family day out in Kent. Don't Miss Carnivorous plants and exotic orchids in the hot-house Warming treats in our cafe A replica of Darwin's cabin on HMS Beagle Flicker Events At Home of Charles Darwin (Down House) Down House Garden Tours Every Weds and Sun in July and August Enjoy an hour long tour of the gardens of Down House. Shop and Publications 1-3 of 3 items

General history The British Museum was founded in 1753, the first national public museum in the world. From the beginning it granted free admission to all 'studious and curious persons'. Visitor numbers have grown from around 5,000 a year in the eighteenth century to nearly 6 million today. The eighteenth century: origins of the British Museum The origins of the British Museum lie in the will of the physician, naturalist and collector, Sir Hans Sloane (1660–1753). Over his lifetime, Sloane collected more than 71,000 objects which he wanted to be preserved intact after his death. The gift was accepted and on 7 June 1753, an Act of Parliament established the British Museum. The founding collections largely consisted of books, manuscripts and natural specimens with some antiquities (including coins and medals, prints and drawings) and ethnographic material. The British Museum opened to the public on 15 January 1759 . The nineteenth century: expansion and discovery Images from top: