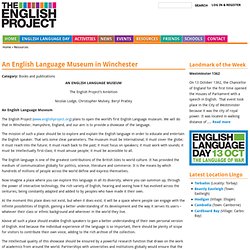 We will do that in Winchester, Hampshire, England, and our aim is to provide a showcase of the language. The mission of such a place should be to explore and explain the English language in order to educate and entertain the English speaker. The English language is one of the greatest contributions of the British Isles to world culture. Now imagine a place where you can explore this language in all its diversity, where you can summon up, through the power of interactive technology, the rich variety of English, hearing and seeing how it has evolved across the centuries, being constantly adapted and added to by peoples who have made it their own. Above all such a place should enable English speakers to gain a better understanding of their own personal version of English. Top 10 UK museums and libraries for Language and Linguistics students to visit this summer « Lingo.

By Craig Evans The prominent linguist David Crystal has long campaigned for a museum of languages to be opened in the UK, following the example set by institutions such as the National Museum of Language in Maryland and Sao Paulo’s Museu da Língua Portuguesa (Museum of the Portuguese Language). 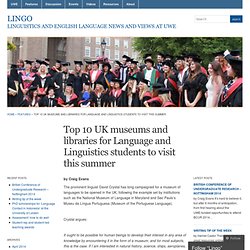 Crystal argues: It ought to be possible for human beings to develop their interest in any area of knowledge by encountering it in the form of a museum; and for most subjects, this is the case. If I am interested in natural history, science, ships, aeroplanes, dolls, toys and a host of other topics, I can in many cities enter a building devoted to my subject and spend a happy day of exploration among like-minded people, benefiting from curatorial expertise. But this is not possible with the most human-defining of subjects: language. Here are my top ten linguistics-related venues to visit this summer: 1. 2. 3. While in Oxford, you might also want to visit the Ashmolean. 4. 5. 6. 7. 8. 9. 10. Like this: Language Museum Resources.avi. National Museum of Language.

The National Museum of Language, located in College Park, Maryland, is a cultural institution established in 1997 to"examine the history, impact, and art of language,"[1][2] and remains one of only a handful of institutions designed for this purpose.[3] The museum may be among the world’s smallest in physical space. 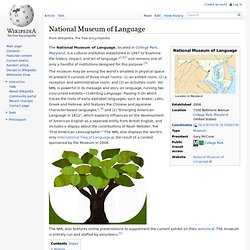 At present it consists of three small rooms: (1) an exhibit room; (2) a reception and administrative room; and (3) an activities room. Yet NML is powerful in its message and story on language, running two concurrent exhibits---(1)Writing Language: Passing It On which traces the roots of early alphabet languages, such as Arabic, Latin, Greek and Hebrew, and features the Chinese and Japanese character-based languages.

";[4] and (2) "Emerging American Language in 1812", which explains influences on the development of American English as a separate entity from British English, and includes a display about the contributions of Noah Webster, the 'First American Lexicographer. " Our mission is to inspire an appreciation for the magic and beauty of language. Redaktør: Ole Stig Andersen. Www.languagemuseum.ca/mission/ The Organizing Committee for the Canadian Language Museum was formed on May 29, 2011 at the annual meeting of the Canadian Linguistics Association. 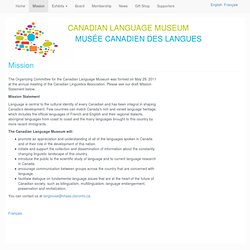 Please see our draft Mission Statement below. Mission Statement Language is central to the cultural identity of every Canadian and has been integral in shaping Canada's development. Few countries can match Canada's rich and varied language heritage, which includes the official languages of French and English and their regional dialects, aboriginal languages from coast to coast and the many languages brought to this country by more recent immigrants. The Canadian Language Museum will: