Museums web and RS for youg 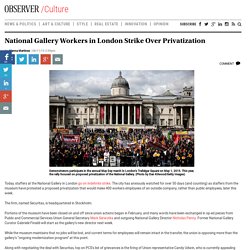 (UP TV) Most cop shows are all about police officers working hard to pull the pieces of a puzzle together to solve a particular crime. Some offer a smattering of scenes sprinkled in about the home life of those on the force. Rarely, are both angles featured. Combining intricate detective work and serious personal struggles, UP TV’s first scripted drama Ties That Bind, features a central character who constantly strives to blend the two halves of her often diametrically opposed life. The series tells the story of Allison McLean, a tough and experienced police detective in suburban Seattle who must arrest her bother, Tim, for aggravated assault. Series creator Sheryl J. Museums Turn to Technology to Boost Attendance by Millennials. 2015 Robert Sainsbury Lecture. 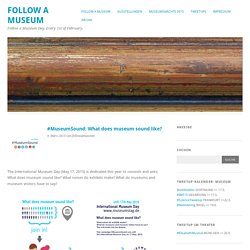 What noises do exhibits make? What do museums and museum visitors have to say? How sounding the museum? Anyone can participate: “You are at the museum, record sounds or videos, which marked either on social media platforms (Twitter, Facebook, SoundCloud, Instagram, Vine, YouTube) with the action hashtag #MuseumSound or directly to the e-mail: mitmachen@museumstag.de … Visualized: »Google Maps #MuseumSound« Int Museumday, 17 May 2015. Swissmuseums sur Twitter : "Discover the Swiss #museums with the new app museums.ch. / App / All Swiss Museums present themselves – Swiss Museums Association / ICOM Switzerland International Council of museums. 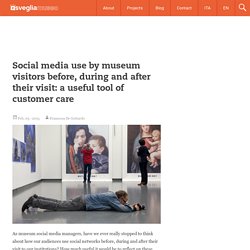 How much useful it would be to reflect on these dynamics to plan better online strategies and maximize the limited resources at our disposal? Have we ever noticed how some of the information passing through social media could prove to be crucial to reconsider some key factors, such as curatorial choices, exhibition design, and audience research? Last summer I had the chance to attend an interesting session of internal training on these issues conducted by Erin Blasco, Education Specialist at the National Museum of American History. I think some of the things Erin pointed out can be useful to address the topic of social media as a tool of customer care. Part #1 – before the visit. Image uploaded by @svegliamuseo. Human-centered design for cultural institutions. Blog Archive » A final thought about museums for 2014. 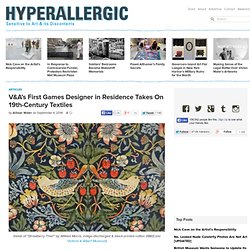 Now games designer Sophia George has unveiled her first project in the residency, which transforms a vivid Victorian textile into an iPad experience. Called “Strawberry Thief” after the 1883 William Morris work it explores, George unveiled the game last month at the Dare ProtoPlay festival in Dundee, Scotland. George decided, as part of the V&A’s task to reinterpret British art from the 1500-1900 galleries, to concentrate on the Arts and Crafts Movement, specifically Morris. Later this year, it’s planned that the game will be available for free. The Value of Museum Selfies.

I thought the culture wars were over. 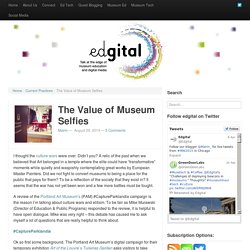 Didn’t you? A relic of the past when we believed that Art belonged in a temple where the elite could have “transformative” moments while quietly and waspishly contemplating great works by European Master Painters. 21 reasons why I hate museums. There are some decent museums. 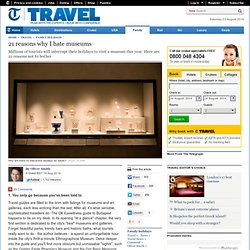 I enjoyed a trip to the Old Operating Theatre and Museum in London Bridge; while the Pitts Rivers Museum in Oxford is an undisputed gem. But perhaps that's because I find human organs in pickling jars, trophy scalps and amputation equipment endlessly compelling. Ceramics, on the other hand, are just dull. As is - though this is an opinion that will no doubt upset many, including the colleague who urged me to visit the Uffizi - religious art.

On a recent trip to Bruges, I visited the city's Groeningemuseum. Crowdsourced curation: Frye Art Museum wants you to remix its collection with a 'like' 3D-Printed Museum Collection Replicas Let Users Interact with Art. In her Smart Replicas project, Dutch designer and art historian Maaike Roozenburg combined high tech 3D scanning and printing techniques with traditional ceramic techniques to create replicas of fragile museum pieces that are typically kept away from visitors hands, and sometimes even from their view. 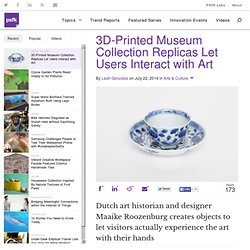 On her website, Roozenburg writes that the historical, cultural and social heritage of valuable objects are managed by “institutions” like museums, but that these objects are made accessible to the people in a very conservative way. That is, they are stored and displayed in a museum and people can visit this place to view these objects but not touch them. According to Roozenburg, not being able to touch and feel these objects “strips the objects of their main purpose and function – their original use – and isolates them from our daily lives.” Roozenburg also worked with Wim van Eck of the AR Lab at the Royal Academy of Art in the Hague to add an augmented reality layer to the replicas. Clic France / Le musée d'art égyp... Reddit, subreddits and AMAs: a guide for arts, culture and heritage. 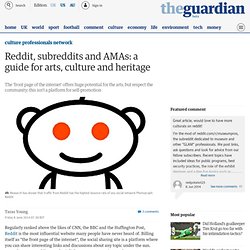 Billing itself as "the front page of the internet", the social sharing site is a platform where you can share interesting links and discussions about any topic under the sun. Users, known as redditors, submit links, start conversations and post comments, all of which are upvoted or downvoted by others. Design thinking at MuseumNext 2014: my five big takeaways. I recently returned from the MuseumNext conference in Newcastle, England, where I gave a talk, From Insights to Prototypes: How Museums can Use the Design Thinking Process to Engage and Delight Visitors and co-led a workshop (with Marco Mason) titled Designing for Happiness: Using Design Thinking to Delight Visitors. 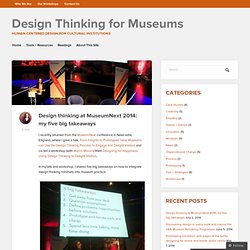 In my talk and workshop, I shared five big takeaways on how to integrate design thinking mindsets into museum practice. My five big takeways at MuseumNext 2014 in Newcastle, England. Image by Anna Follo. Svegliamuseo On Air – How To Run A Social... Museum Manners at the Milwaukee Art Museum - Yo... Our Museums Are Broken. Museums in the Digital Age. Expectations & Satisfaction in Gallery Experiences. Written by Jenn DePrizio, Director of Visitor Learning, Isabella Stewart Gardner Museum Since participating in the 2014 Gallery Teaching Marathon held at the Museum of Contemporary Art San Diego during the NAEA conference, two questions have been swimming around in my mind: 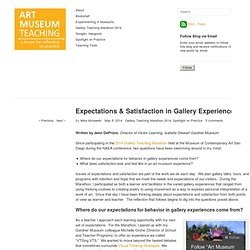 MWF2014: Museums and the Web Florence 2014. Reflecting on the Learning Power of Conversation in Museums. Smithsonian-webstrategy.wikispaces. Plus.google. Five tips on going freelance in museums and heritage. Several years ago, I made the decision to jump into freelancing. To an outsider, it may have seemed an odd choice. I had been working in museums for 16 years, and had managed to climb the greasy pole of curatorship to reach the dizzying heights of head of exhibitions for a national museum. I had a permanent post and a civil service pension. But I was also ready for a change of direction. Six years and a protracted credit crunch later, I still relish the challenge of being independent. It's surprising how often my employed colleagues ask wistfully about becoming a freelancer. 1.