Museum of Failure – Learning is the only way to turn failure into success. Museum of the Home formerly Geffrye Museum. Oxford University Museum of Natural History. Museum of Soviet Vehicles. Museum ENTER. Bata Shoe Museum » An unusual and unique Toronto attraction: a museum of footwear. Welcome to the Tolpuddle Martyrs Museum. The Cinema Museum, London. 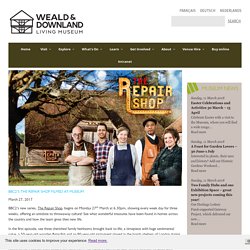 See what wonderful treasures have been found in homes across the country and how the team gives then new life. In the first episode, see three cherished family heirlooms brought back to life; a timepiece with huge sentimental value, a 50-year-old wooden flying fish and an 80-year-old instrument played in the bomb shelters of London during the Blitz. Internet Archive Book Images. This Fascinating Whales Exhibition Is A Giant Success. Historical Museum of the City of Krakow.

V&A Museum of Childhood Victoria and Albert Museum. New England Wireless & Steam Museum – A Non-Profit. Museumoffailure. Puzzle balls and Ivory. A: They were usually made of ivory but can also be found in synthetic ivory, resin, wood, jade, and other materials. 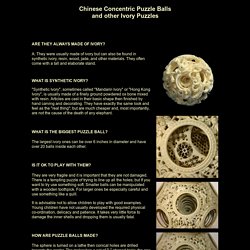 They often come with a tall and elaborate stand. "Synthetic Ivory", sometimes called "Mandarin Ivory" or "Hong Kong Ivory", is usually made of a finely ground powdered ox bone mixed with resin. Articles are cast in their basic shape then finished by hand carving and decorating. They have exactly the same look and feel as the "real thing"; but are much cheaper and, most importantly, are not the cause of the death of any elephant.

The largest ivory ones can be over 6 inches in diameter and have over 20 balls inside each other. They are very fragile and it is important that they are not damaged. It is advisable not to allow children to play with good examples. The sphere is turned on a lathe then conical holes are drilled towards the center. Pins from puzzlemuseum.com on Pinterest. Thursford Collection. A fabulous day out for all the family Opens Sunday 16th April 2017. 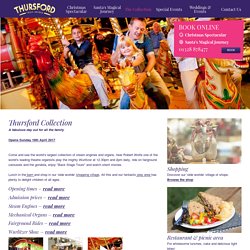 Come and see the world’s largest collection of steam engines and organs, hear Robert Wolfe one of the world's leading theatre organists play the mighty Wurlitzer at 12.30pm and 2pm daily, ride on fairground carousels and the gondola, enjoy "Back Stage Tours" and watch silent movies. Lunch in the barn and shop in our ‘olde worlde’ shopping village. All this and our fantastic play area has plenty to delight children of all ages. The Collection is open from Sunday 16th April 2017 11.00 am - 4.00pm until Thursday 21st September 2017. Last entry into the museum 3.00pm. We are closed on Fridays & Saturdays. Excludes Special Event Dates.All Adults £5.00Under 16 years FREE.For group visits please call the booking office.

Mechanical organs. When Graham Atkinson purchased his first steam engine and mechanical organ back in the 1980’s few people could have ever imagined that this was destined to be the start of a unique collection that would become famous throughout the world. 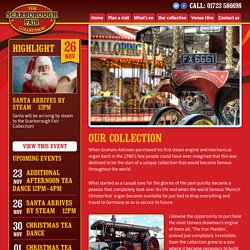 What started as a casual love for the glories of the past quickly became a passion that completely took over his life and when the world famous ‘Munich Oktoberfest’ organ became available he just had to drop everything and travel to Germany so as to secure its future. Likewise the opportunity to purchase the most famous showman’s engine of them all, ‘The Iron Maiden’, proved just completely irresistible. Soon the collection grew to a size where it became necessary to build new storage facilities for the winter and it was at this point that the idea of building an entertainment venue instead was considered, after all why should such wonderful items only be enjoyed during the summer months? Home of Charles Darwin (Down House) 1860A Year of Debate While the world reacts fiercely to Darwin's theories, he remains at Down House, now transformed into a self-sufficient country retreat. 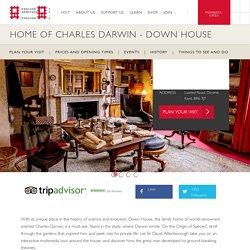 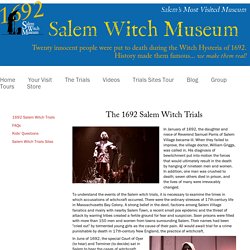 When they failed to improve, the village doctor, William Griggs, was called in. His diagnosis of bewitchment put into motion the forces that would ultimately result in the death by hanging of nineteen men and women. In addition, one man was crushed to death; seven others died in prison, and the lives of many were irrevocably changed. To understand the events of the Salem witch trials, it is necessary to examine the times in which accusations of witchcraft occurred. There were the ordinary stresses of 17th-century life in Massachusetts Bay Colony. In June of 1692, the special Court of Oyer (to hear) and Terminer (to decide) sat in Salem to hear the cases of witchcraft. As years passed, apologies were offered, and restitution was made to the victims' families. Kelvedon Hatch Secret Nuclear Bunker. Museum of Brands - Home. Foundling Museum London: Foundling Hospital & Coram.