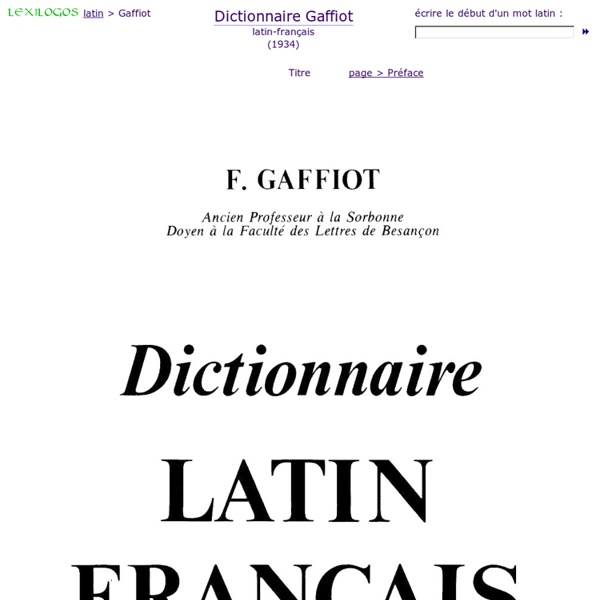 LacusCurtius — Smith's Dictionary of Greek and Roman Antiquities LacusCurtius Educational Resource: a Selection of Articles from A 19th-Century Classical Encyclopaedia William Smith, D.C.L., LL.D.: A Dictionary of Greek and Roman Antiquities John Murray, London, 1875. This single volume, of 1294 pages in rather fine print set in two columns and amounting to well over a million words, is a treasure trove of information on the ancient world, and was for many years a standard reference work, carried thru several British and American editions from the first in 1842 to the last in 1890‑91 with relatively few alterations. It shares one of its selling points with the Web: many illustrations.

How to Write a Love Letter in Latin Posted on 11. Jun, 2014 by Brittany Britanniae in Latin Language Whether you are writing a love letter to a old or new romance, it is always a good idea to “spice” up the normal, same, banal content with something unique to make your significant other feel special. Why not add a little Latin? This post is dedicated to add some Latin to your love life in a love letter (Epistula Amoris). Archetypal lovers Romeo and Juliet portrayed by Frank Dicksee. Latin Dictionary Online Translation LEXILOGOS dies Veneris VIII Aprilis Latin dictionary Latin Latina •Latin > English & English > Latin dictionary (Notre Dame) • Latin-English dictionary (LatDict) • Latin-English Dictionary

GRASP Method for Acquiring Latin Paedagogica Index GRASP Preface GRASP Handout Go to a sample GRASP text. GRASP stands for GRadual Aggregative Syntactic Praxis. lexica Latina et Graeca 1. Novum Lexicum Manuale Latino-Graecum & Graeco-Latinum (1767, ed. 1827, Benjamin Hedericus)- You can type the Greek with the Greek letters or you can type with the Latin letters, using the official Greek beta-code (see the picture): η = h; θ = q; χ = x; υ = u; ψ = y; ω = w; ξ = c- There is always an option to go to the next/previous page on the bottom of the pageGr-Lat: The cover, preface and other pages and Lat-Gr: The cover, preface and other pages 2.