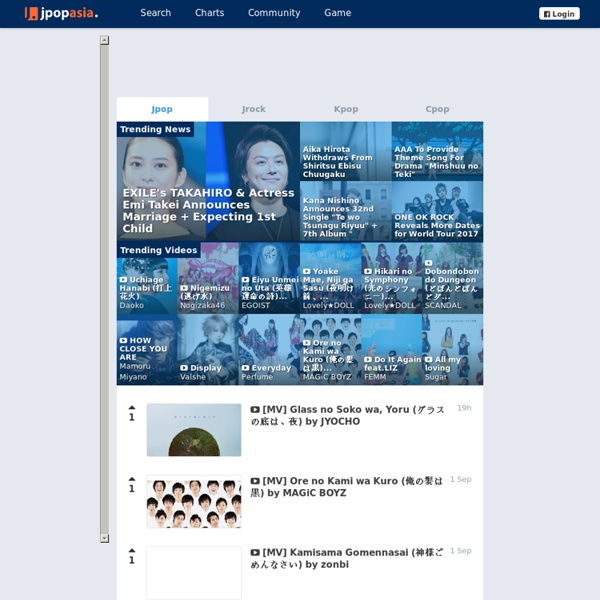 The Forgotten Language of Flowers In the early 18th century the Turkish "Secret Language of Flowers" was introduced to Europe by Lady Mary Wortley Montague, wife of the British ambassador to Constantinople. Flowers had long been a sign of romance but now lovers were able to send secret messages to each other by means of sending a posy of flowers. Each flower had a specific meaning and the order of arrangement had much to do with the intended "message". The French seem to have taken this idea to heart. Dark-Fenix Music Awards 2013 #1. Akihisa Kondo Having his major debut in 2012, Akihisa Kondo has already become a successful artist with 4 amazing releases in 2013: his first full-length album "You &" and three singles, "Rahen", "Ai" and "Black Night Town". Akihisa Kondo started playing the acoustic guitar in junior high. Upon finishing school, he found a music-related job at one of the Tokyo live music clubs and eventually started performing on the streets. In 2009, the future singer won the Grand Prix award at the music audition hosted by MySpace.

humanæ - work in progress 1. On the Customize screen turn off the Use default mobile theme option under Advanced Options. 2. make music together let's get started making music... 1draw on the grid with your mouse to make a beatshow me2 save your track and share it with friends. show me3 out of ideas? roll the dice and start remixing. show me4 explore the beatlab community show me For more tips, tutorials vidoes, and FAQs, check out our community wiki. You can use the following keyboard shortcuts while composing a track.

Six Styles of Love Love Styles: A Brief Background The six love styles was originally developed by John Lee (1973, 1988), he referred to these love styles as "colors of love", and also wrote a book on this theory. The six love styles are: Eros, Ludus, Storge, Pagma, Mania, and Agape. Later Clyde Hendrick and Susan Hendrick, expanded on this theory. RED LYRICS Passionate vocals. Gnashing guitars. A potent message. These are the elements that make Red — both live and on their mighty debut, End of Silence—one of the most buzzed about bands to crash through the Christian rock world in recent memory. The Color Thesaurus - Ingrid Sundberg Update: Hey everyone! Thank you so much for your support of my color thesaurus. I’ve gotten tons of wonderful emails from writers, designers, and educators who all love the thesaurus and want one in their own home.

Detailed Character Profile Generator Create a Detailed Character Profile Generate a detailed profile for a realistic and rounded character. Output loads of detail including a biography, information about the important people in your character's life, and a timeline. Ideal for your protagonist or characters in a long novel or epic film series. Writing Gender-Specific Dialogue Writing dialogue to suit the gender of your characters is important in any genre, but it becomes even more essential in romance writing. In a romance novel, characters of opposite sexes are often paired up or pitted against each other in relationships with varying degrees of complication. Achieving differentiation in the tones and spoken words of your male and female characters requires a careful touch, especially if you’re a woman writing a male’s dialogue, and vice versa. In an excerpt from On Writing Romance by Leigh Michaels, the author discusses ways in which you can render the dialogue of your guy or gal protagonist more realistic and effective. GENDER-SPECIFIC DIALOGUE It’s difficult for a writer to create completely convincing dialogue for a character of the opposite gender.

How to Avoid Cliches in Writing: Story Themes To be an original writer, it’s important to learn how to avoid clichés. Many of the same themes are explored often in fiction without being reduced to clichés. You can do the same by understanding what the clichés of your genre are, and how to create your own, varied treatment: On the Concepts of Set-Up and Pay-Off - 2 Set-Up/Pay-Off and a Related Figure Richard Raskin Early in The Return of the Killer Tomatoes (John DeBello, 1988), the character played by George Clooney throws a disc of pizza dough up into the air, pizzaiolo fashion (Figure 1), and the action continues with no shot of the dough redescending. In the final moments of the film, Anthony Starke and Clooney address the audience on the subject of the film's construction (Figures 2-4). While this example does not especially illuminate the nature of the set-up/pay-off figure, it shows that those concepts are so widely used within American film culture that audiences can be expected to understand a gag based on them, at least in a spoof on low-budget cinema. Yet the terms set-up and pay-off do not appear in standard works on film.

Plotting your sci-fi novel - PATTERN How do you begin to develop a plausible world and start plotting your sci-fi novel? Here’s how the Now Novel PATTERN system can give you the blueprint you need for well-plotted, well-developed science fiction: Worldbuilding is a crucial aspect of writing science fiction. Your world must seem plausible to the reader, and careful worldbuilding ensures that is the case.