How to Make Office Weapons Out of Office Supplies 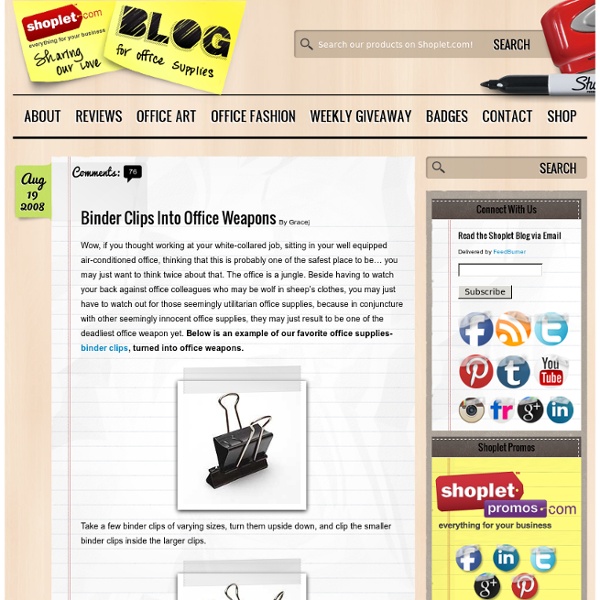 Wow, if you thought working at your white-collared job, sitting in your well equipped air-conditioned office, thinking that this is probably one of the safest place to be… you may just want to think twice about that. The office is a jungle. Beside having to watch your back against office colleagues who may be wolf in sheep’s clothes, you may just have to watch out for those seemingly utilitarian office supplies, because in conjuncture with other seemingly innocent office supplies, they may just result to be one of the deadliest office weapon yet. Below is an example of our favorite office supplies- binder clips, turned into office weapons. Take a few binder clips of varying sizes, turn them upside down, and clip the smaller binder clips inside the larger clips. It should look like this when the larger binder clips have clipped the smaller ones. Remove all the binder clip handles. Add another 2 larger binder clips on top of the smaller edge with a rubber band in between. stumbleupon

6 Life-Changing Uses for Binder Clips (That You Could've Easily Thought Of) from Look What I Found Yes, it may seem like an ordinary binder clip. And it is. Make no mistake -- it will keep your papers organized with the best of them. The BEST. The PriNXT: A Working Printer Made From Lego The next time you have a quick black and white image to print you might try sending it over to print out on your Lego bricks. A new project, called the PriNXT, is a simple but effective printer built out of everyone’s favorite toy. The PriNXT by Leon Overweel is made from Lego’s Mindstorm system that lets you add motors and some programming magic to your Lego projects.

25 Simple Gadgets and Accessories - FizX Entertainment You know what they say, “less is more”, and these simple (yet awesome) gadgets are the perfect examples. While the “Slide to Unlock” doormat and superhero bookends don’t feature the latest in technology, they most certainly are eye candy as well as conversation pieces. Continue reading to see twenty five more. 25. Mini Doughnut Factory Ten Formal Complaints in Six Months Apparently after receiving three, you are meant to have some kind of formal meeting between the parties involved but this never happened. According to the rules, if there are five complaints, an external mediator has to be bought in. This didn't happen either and I was quite disappointed. I don't really have anything against Simon apart from the fact that he likes the band Nickelback and I have no idea what his problem with me is, as I'm pretty sure I am an absolute pleasure to work with. I brought in donuts once, which is pretty nice.

Need Some Motivation Right Now? Read This IMMEDIATELY — Think Traffic If you’re in desperate need of some motivation, we’re going to fix that problem, right here, right now. Prepare yourself. WARNING: I’m going to swear and yell a little in this post. Desperate times call for desperate measures. You said you needed motivation.

Complete list of Facebook Chat Emoticons While playing with Facebook Chat I wondered if it supported emoticons. Turns out it does. But when I tried the >:-) emoticon (a 'devil') and saw it printed as boring text, I wondered, "what smilies does facebook actually support?" So with the help of Safari and some javascript hacking I present to you a complete list of facebook emoticons. smile frown Best Alarm Clocks - 10 Funny Alarm Clocks and Reviews - Womans Day For most people, getting out of bed in the morning is a bit of a struggle. Luckily, the 10 clocks below are here to help. Some wake you up with an annoyingly loud noise, while others won't shut off until you complete a task--but they all promise to get even the sleepiest sleepyhead up and moving. Start Your Engines It’s full speed ahead as soon as this Genuine Hotrod Hardware drag-racing alarm clock goes off.