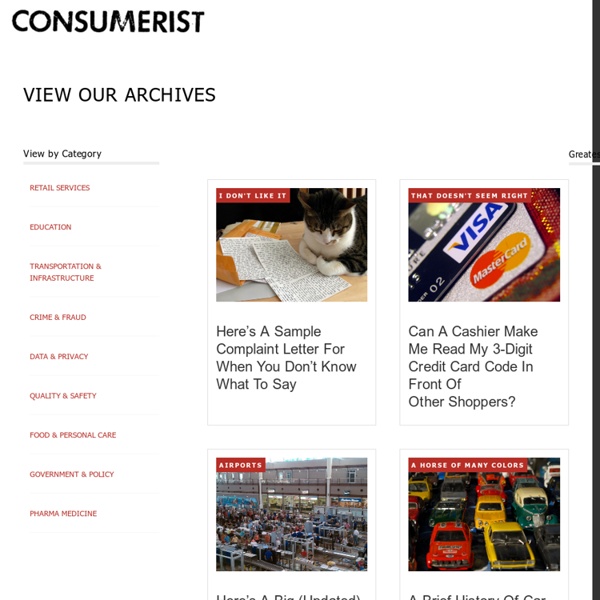 Related:  Hallmarks of Bad Parenting that are Actually Good For Kids... • My Best Sources • union_st

August 10: Our Latest Pet Finds - Lifestyle This content was produced by GOOD with the support of Purina ONE® beyOnd® There's nothing quite like a cute dog or cat picture to brighten your day; get your fill at GOOD Pets where we've gathered some of our favorite past pet-related content. And if that's not enough pets for you, check out the finds below from this past week of GOOD Finder, which features a collection of all things that are awesome as submitted by the GOOD community. Image via flickr (cc) user Murat Livaneli The six tech policy problems Congress failed to fix this year August isn’t the top time of year for thinking about tech policy. For many, it’s vacation time, a month when Americans are more focused on hacking a path to the nearest beach than hacking their computers. Congress just left for vacation too, heading home last week for its traditional August recess.

Michel Foucault Born in Poitiers, France to an upper-middle-class family, Foucault was educated at the Lycée Henri-IV and then the École Normale Supérieure, where he developed an interest in philosophy and came under the influence of his tutors Jean Hyppolite and Louis Althusser. After several years as a cultural diplomat abroad, he returned to France and published his first major book, The History of Madness. After obtaining work between 1960 and 1966 at the University of Clermont-Ferrand, he produced two more significant publications, The Birth of the Clinic and The Order of Things, which displayed his increasing involvement with structuralism, a theoretical movement in social anthropology from which he later distanced himself.

100 Must See Movies: The Essential Men’s Movie Library For whatever reason (most likely the fact that viewing is easier than reading), films don’t seem to get the same kind of cultural respect as books do. Which is a shame because excellent movies can be just as entertaining, mind-expanding, and life changing as good books. Scenes, characters, and quotes from the greatest movies stay with us long after we view them. My Baby Didn't Want Me to be an Attachment Parent This poor 4 year old is going to get a lot of shit from the kids at school someday. There’s a Time magazine cover story out this week that discusses the popularity of the attachment parenting trend and man behind the movement’s bible, The Baby Book, Dr. William Sears. Afghanistan and the Artificial US War on Terror (Gopal Anand's New Book) By Juan Cole I guest-hosted a book salon over at Firedoglake on Sunday concentrating on Anand Gopal’s expose of the so-called ‘war on terror’ in Afghanistan. Below is my review of the book.

Latest Posts ...and "my opinion of usefulness/superiority/etc". Some people just need more hand-holding than others. Not too long ago, a friend started complaining that their (Windows) machine had a problem. Seems it would no longer shut down when the Ctrl-Alt-Del sequence, also known as the three-finger-salute, was pressed. After a couple of weeks about hearing about it, I finally agreed to go over to the house and take a look at it. Came into the house, the machine was powered on with a blank screen since no recent user activity so I hit a button to verify that it was functional and had him log in.

Deal of the Day: Find Great Deals on Fun Things to Do in Provide Providence may be the capital of the smallest state in the country, but it has plenty of things to do for urban adventurers. Any Providence guide will list the many shops, eateries, and museums in the downtown area, but it's often the lesser known attractions that are the most interesting. The performing arts are a big part of Providence's culture. The city is home to the Tony Award-winning Trinity Repertory Company, Rhode Island Philharmonic, and Opera Providence. The Festival Ballet Providence's 20-plus dancers come from six different countries and perform for the Providence public roughly 30 times each year.

12 Absolutely and Insanely Essential Utilities For Programmers In every era in recent times there has been one profession that for a short while you could enter without formal training. Autodidacts in the 19th century could read the law without recourse to formal education (see Abe Lincoln). In the early 20th century it was aviation. Spot on! The artist who lets children cover white room with colourful stickers By Daily Mail Reporter Updated: 12:21 GMT, 5 January 2012 This is what happens when children are given thousands of coloured stickers and a totally white room all to themselves - plus a free reign to express themselves. Before the kids descended on this all-white lounge the living room looked like a minimalist's dream pad. Afterwards barely a spec of white remained. But this is no normal living room, this is the latest work of daring 82-year-old Japanese artist Yayoi Kusama. And the finished product is just how she likes it.

How to Foster Grit, Tenacity and Perseverance: An Educator’s Guide Culture Teaching Strategies Getty How can we best prepare children and adolescents to thrive in the 21st century? RAGBRAI - Guide for Virgins (Version 2 Why is this account suspended? This account may be suspended due to: A TOS violation (spam, hacking, etc)Billing IssueOther account related factors To reinstate this account please contact our support team who will be happy to help you. Email to: support@directnic.com Or Create a Ticket Web Site Privacy Policy

Having a resource for people to access for info (in this case negative info, the eyes of a watchdog group) by dpvagabond Jul 19