Story of the Year No. 5: Chessy Prout sheds anonymity in St. Paul’s rape case. Rape-trial defendant denies sex with girl, but friends say he told them he did it. On Owen Labrie’s list, only one girl’s name was in capital letters. 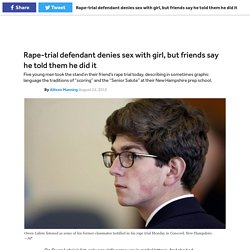 And she had already said no. So Tucker Marchese wanted to know: how did his friend get her to say yes? “I can’t believe you poked her, dude,’’ wrote Marchese, who like Labrie would soon graduate from New Hampshire’s exclusive St. Paul’s School, in a May 2014 Facebook message. “How’d it go from no to bone?’’ “Just pulled every trick in the book,’’ Labrie replied. Marchese knew the girl had declined Labrie’s invitation for a Senior Salute, a tradition on the prep school campus in which graduating seniors asked younger students to hang out – or hook up – before graduation.

Labrie is now charged with raping the girl, who was 15 at the time, and who Boston.com is not naming. Labrie is expected to take the stand this week. When Labrie went back to his dorm that Friday night, one testified, a half dozen boys surrounded him, asking if he’d had sex with the girl. Prep school grad breaks curfew; prosecutors want bail revoked.

BOSTON —The state is looking to revoke the bail of an elite New Hampshire prep school graduate who was convicted of sexually assaulting a 15-year-old classmate last year. 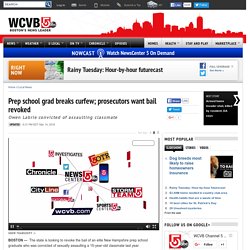 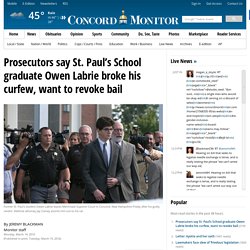 Paul’s School graduate convicted of having sex with an underage student, claiming he violated the terms of his release at least eight times. The allegation stems from an article published last week on Vice ’s website, in which a freelance reporter recounted running into the 20-year-old one afternoon last month on an MBTA train from Cambridge, Mass., to Boston. Him. Her. A cruel and unnecessary punishment in a prep school sex scandal. A New Hampshire judge sentenced a former prep school student to one year in prison after he was found guilty of having sex with an underage classmate. 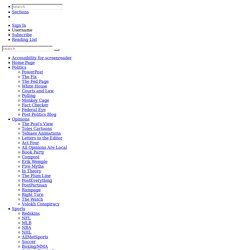 (Reuters) Owen Labrie behaved despicably. As a senior at St. Paul’s School, the elite New Hampshire prep school, he lured a 15-year-old freshman into having sex with him, as part of a repulsive tradition known as “senior salute,” in which graduating boys compete to “slay” the greatest number of girls. And yet, I find myself unsettled over the harshness of Labrie’s sentence. Ruth Marcus is a columnist for The Post, specializing in American politics and domestic policy. Facebook Labrie was charged with raping the freshman, but acquitted of that crime — correctly so, in my view.

She testified that she told Labrie to stop — but also that she lifted her hips so he could remove her shorts. As to the statutory rape, reasonable people can differ over the appropriate age of consent and whether sex between two teenagers should be criminalized. Nbc. History Says Prep School Sex Convict Has Slim Shot at Pardon. The recent graduate of an elite New Hampshire prep school who was convicted of sexually assaulting a 15-year-old freshman is unlikely to avoid having to register as a sex offender for life given the history of pardons and commutations in the Granite State. 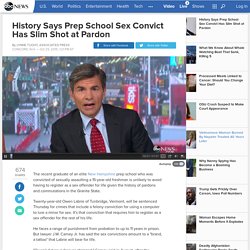 Twenty-year-old Owen Labrie of Tunbridge, Vermont, will be sentenced Thursday for crimes that include a felony conviction for using a computer to lure a minor for sex. It's that conviction that requires him to register as a sex offender for the rest of his life. He faces a range of punishment from probation to up to 11 years in prison. But lawyer J.W. Carney Jr. has said the sex convictions amount to a "brand, a tattoo" that Labrie will bear for life. "Owen's future is forever changed," Carney said in August, after the verdicts were announced. Felony Conviction Stands In St. Paul's Rape Case, New Hampshire Judge Rules. Owen Labrie. Owen Labrie2. Classmate1. Classmate2. When It Rescinds Admission, Harvard Weighs Several Factors. His trial concluded only last month, but Owen Labrie—the St. 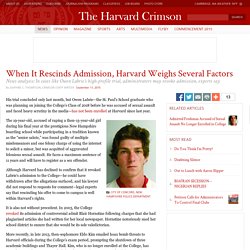 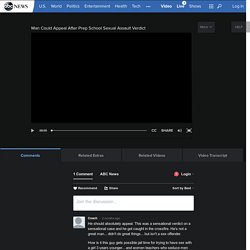 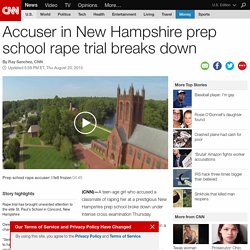 " she said on the stand when a defense lawyer suggested she had sent conflicting signals to the defendant. "I was violated in so many ways," she said in tears. "Of course, I was traumatized. I'm sorry. I'm sorry. At the conclusion of her testimony, the young accuser left court crying. The accusations have shed light on a campus tradition known as the "Senior Salute," in which seniors try to have sexual encounters with as many younger students as possible before graduation. Owen Labrie, 19, who has pleaded not guilty, is being tried on charges that include the rape of the 15-year-old student on the sprawling campus in May 2014 -- just days before his graduation. On the stand, the girl said she agreed to meet Labrie and accompany him to a machine room.

"I said, 'No, no, no, keep it up here,'" she testified, signaling above her waist. What Was Owen Labrie Found Guilty Of? The St. Paul's School Student Faced Felony & Misdemeanor Charges. A verdict was reached in the case of a 19-year-old former prep school student who was accused of allegedly sexually assaulting a younger classmate. 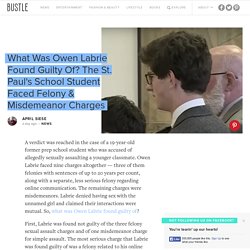 Owen Labrie faced nine charges altogether — three of them felonies with sentences of up to 20 years per count, along with a separate, less serious felony regarding online communication. The remaining charges were misdemeanors. Owen Labrie of St. Paul’s School Is Found Not Guilty of Main Rape Charge. CONCORD, N.H. — The prep school graduate accused of raping a younger student at the elite St. 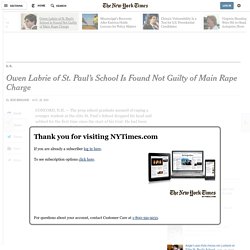 Paul’s School dropped his head and sobbed for the first time since the start of his trial: He had been found not guilty on Friday of felony sexual assault charges, but was convicted of having sex with a girl who was below the age of consent. The accuser sat in the front row, tightly flanked by her family, her father’s hand on her head, her mother’s arm around her shoulders. She cried, too, in the main hall of the drab courthouse here, before stepping out the back door.