5 Hallmarks of Bad Parenting That Are Actually Good for Kids 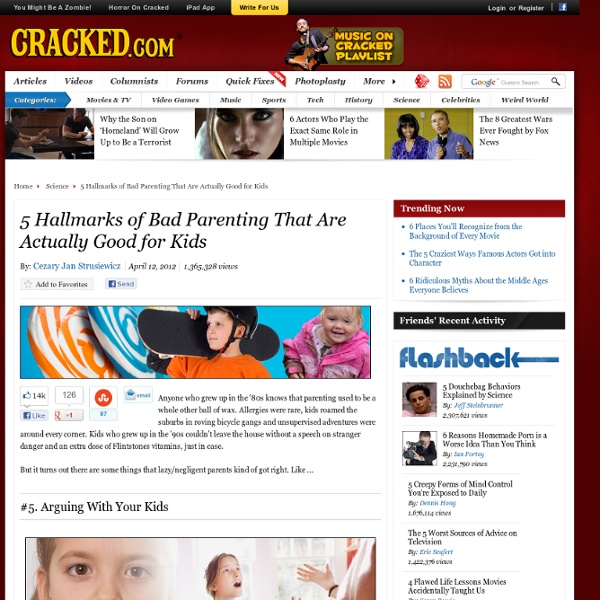 Anyone who grew up in the '80s knows that parenting used to be a whole other ball of wax. Allergies were rare, kids roamed the suburbs in roving bicycle gangs and unsupervised adventures were around every corner. Kids who grew up in the '90s couldn't leave the house without a speech on stranger danger and an extra dose of Flintstones vitamins, just in case. But it turns out there are some things that lazy/negligent parents kind of got right. #5. "Because I said so!" Every parent winds up saying this, whether they like it or not. No, in these situations it's best to quickly put your foot down and make it clear who's the boss. Getty"You lost, kid. The Surprising Benefit: Actually, science says that those fights provide excellent opportunities for your children to practice their reasoning, discussion and negotiation skills. GettyAlthough raising a wuss means you can force them to wear stupid costumes and dance for you. Getty"OK, since it's your roulette gun, I'll take the first three turns."

Modern parenting may hinder brain development, research shows Social practices and cultural beliefs of modern life are preventing healthy brain and emotional development in children, according to an interdisciplinary body of research presented recently at a symposium at the University of Notre Dame. “Life outcomes for American youth are worsening, especially in comparison to 50 years ago,” says Darcia Narvaez, Notre Dame professor of psychology who specializes in moral development in children and how early life experiences can influence brain development. “Ill-advised practices and beliefs have become commonplace in our culture, such as the use of infant formula, the isolation of infants in their own rooms or the belief that responding too quickly to a fussing baby will ‘spoil’ it,” Narvaez says. The United States has been on a downward trajectory on all of these care characteristics, according to Narvaez. Instead of being held, infants spend much more time in carriers, car seats and strollers than they did in the past.

FUN AT HOME WITH KIDS Until I was a blogger, I honestly didn't know that that many kid activity blogs existed (prior to becoming a blogger, I did know about a few big blogs, like The Imagination Tree, The Artful Parent). Discovering all these new fabulous blogs and bloggers over the last four months inspired me to write a post profiling a set of them all at once. I hope you all will find it helpful and that it introduces you to several amazing blogs you didn't previously know about! It was incredibly hard to narrow the list down to just 15 - so please, if you are a kid activity blogger or you have a favorite kid activity blog not mentioned, add their link to the comments on this post! :) And now, I present to you fifteen amazing kid activity blogs (in no particular order other than I put myself first - ha! Hi, I'm Asia! One of my favorite posts is about our DIY Sensory Boards. Hi, I'm Tammy! One of my favorite posts is Exploding Art - an exciting combination of both art and science. Hi, I'm Jen!

5 Amazing Things You Didn't Know Babies Could Do Infants tend to be lazy, stupid turds, as anyone who has had to work with one can attest. Even if you find babies adorable, you have to admit that the only "amazing" thing about them is how they can turn milk into poop that looks and smells like it came out of a trucker who only eats at buffets. Yet there are some other weird mutant superpowers that infants are born with, abilities that simply shouldn't be possible in a floppy little person who probably hasn't lived long enough to see a Christmas. For example ... #5. Babies Are Seekers of Justice Photodisc/Photodisc/Getty Images If you've ever taken a psychology class or watched Lost, you're probably familiar with the theory that people are born as blank slates. Latin DictionaryWhy else is "sinister" the Latin word for "left"? Researchers at Yale stuck babies between 6 and 10 months old in front of a puppet show, a morality tale featuring anthropomorphic geometric shapes, which sounds like the shittiest puppet show ever. #4. Fodey.com #3.

Why A Teen Who Talks Back May Have A Bright Future : Shots - Health News hide captionGood arguments can provide lessons that last a lifetime. But psychologist Joseph P. Allen's research shows that yelling isn't the answer. "The teens who learned to be calm and confident and persuasive with their parents acted the same way when they were with their peers," he says. iStockphoto.com If you're the parent of a teenager, you likely find yourself routinely embroiled in disputes with your child. It's a vital part of growing up, but it can be extraordinarily wearing on parents. Researchers from the University of Virginia recently published their findings in the journal Child Development. Allen says almost all parents and teenagers argue. "We tell parents to think of those arguments not as nuisance but as a critical training ground," he says. Teens should be rewarded when arguing calmly and persuasively and not when they indulge in yelling, whining, threats or insults, he says. "Parents reacted in a whole variety of ways. Again, parents won't necessarily agree.