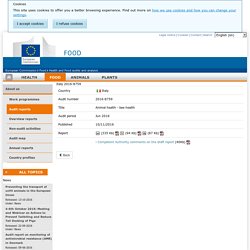 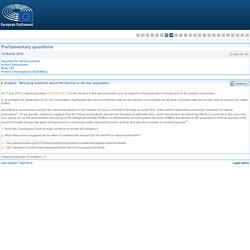 In its answer of 9 September 2015, the Commission highlighted the lack of confirmed data on that decline, and insisted on the lack of specific data and on the need to pursue the matter further. According to recent press reports, the continuing decline in the number of bees is a threat to farming, as some 35% of the world’s agricultural production depends on natural pollinators(1).

To be specific, evidence suggests that 9% of bee and butterfly species are threatened with extinction, which would have far-reaching effects on production, the economy and, above all, on the environment. 1. Does the Commission have enough evidence to review the situation? 2. PARLEMENT EUROPEEN - Réponse à question E-001811-16 Urban beekeeping. PARLEMENT EUROPEEN - Réponse à question E-000946-16 Support for beekeepers — unanswered question. In question No E-009542-15 I informed the Commission that, following a change to Slovak law in 2014, beekeepers have only been able to apply for EU funding via cooperatives that represent more than 30% of beekeepers. 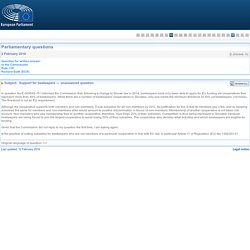 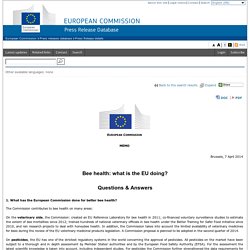 Questions & Answers 1. What has the European Commission done for better bee health? The Commission contributes to bee health on many areas: On the veterinary side, the Commission: created an EU Reference Laboratory for bee health in 2011; co-financed voluntary surveillance studies to estimate the extent of bee mortalities since 2012; trained hundreds of national veterinary officials in bee health under the Better Training for Safer Food initiative since 2010, and ran research projects to deal with honeybee health. On pesticides, the EU has one of the strictest regulatory systems in the world concerning the approval of pesticides. On agriculture, the Commission has maintained the level of EU funding to national apiculture programmes for the period 2014-2016 (taking into account the accession of Croatia), which amounts to € 33,100.000 per year. 2.

Full report is available here: PARLEMENT EUROPEEN - Réponse à question E-009542-15 Support for beekeepers. Following a change in Slovak law in 2014, financial aid is provided only to cooperatives which represent more than 30% of beekeepers in Slovakia, and beekeepers can only receive aid through those cooperatives. 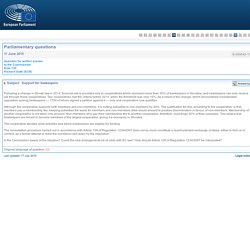 Membership of another cooperative is not taken into account. The cooperative decides what activities and which beekeepers are eligible for funding. Is the Commission aware of the situation? PARLEMENT EUROPEEN - Réponse à question E-009154-15 Concerns among beekeepers. PARLEMENT EUROPEEN - Réponseà question E-007450-15 Romanian beekeepers steer away from organic sector. At present, in Romania there are over 100 000 bee families which are certified as part of the organic system or which are being converted to organic production. 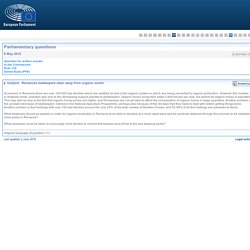 However this number is relatively small, probably also due to the decreasing support granted to beekeepers. Organic honey production totals 3 600 tonnes per year, but almost all organic honey is exported. This may also be due to the fact that organic honey prices are higher, and Romanians are not yet able to afford the consumption of organic honey in large quantities. Another problem is the constant decrease of beekeepers’ interest in the National Apiculture Programme, perhaps also because of the red tape that they have to deal with before getting things done. Another problem is that holdings with over 150 bee families account for only 24% of the total number of families of bees, and 52-58% of all the holdings are subsistence farms.

PARLEMENT EUROPEEN - Réponse à question E-002865-13 The effect of electrosmog on bee behaviour. Several studies have shown that the behaviour of bees is affected by electromagnetic radiation (electrosmog). 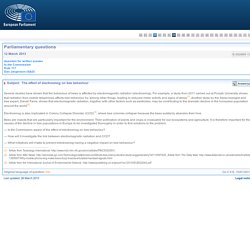 For example, a study from 2011 carried out at Punjab University shows that radiation from mobile telephones affects bee behaviour by, among other things, leading to reduced motor activity and signs of stress(1). Another study by the Swiss biologist and bee expert, Daniel Favre, shows that electromagnetic radiation, together with other factors such as pesticides, may be contributing to the dramatic decline in the honeybee population around the world(2).

Electrosmog is also implicated in Colony Collapse Disorder (CCD)(3), where bee colonies collapse because the bees suddenly abandon their hive. Bees are insects that are particularly important for the environment. Their pollination of plants and crops is invaluable for our ecosystems and agriculture. . — Is the Commission aware of the effect of electrosmog on bee behaviour? PARLEMENT EUROPEEN - Réponse à question P-007860-15 Checks on animals and animal products at EU external border crossing-points. When Croatia joined the EU on 1 July 2013, over 1 000 km of Croatian land borders became EU external borders, and checking arrangements at border crossing-points were altered in line with European standards. 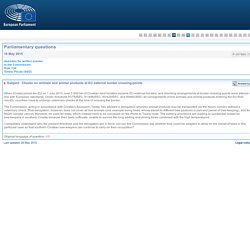 Under directives 91/78/EEC, 91/496/EEC, 90/425/EEC, and 89/662/EEC all consignments of live animals and animal products entering the EU from non-EU countries have to undergo veterinary checks at the time of crossing the border. The Commission, acting in accordance with Croatia’s Accession Treaty, has allowed a derogation whereby animal products may be transported via the Neum corridor without a veterinary check. That derogation, however, does not cover all live animals (one example being bees, whose transit to different bee pastures is part and parcel of bee-keeping), and the Neum corridor cannot, therefore, be used for bees, which instead have to be conveyed on the Ploče to Trpanj route. 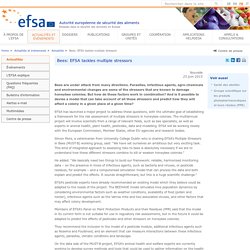 Parasites, infectious agents, agro-chemicals and environmental changes are some of the stressors that are known to damage honeybee colonies. But how do these factors work in combination? And is it possible to devise a model that can take account of all these stressors and predict how they will affect a colony in a given place at a given time? EFSA has launched a major project to address these questions, with the ultimate goal of establishing a framework for the risk assessment of multiple stressors in honeybee colonies. Simon More, a veterinarian from University College Dublin who is chairing EFSA’s Multiple Stressors in Bees (MUST-B) working group, said: “We have set ourselves an ambitious but very exciting task. EFSA’s pesticide experts have already recommended an existing model which they believe could be adapted to the needs of the project. PARLEMENT EUROPEEN - Réponse à question E-004517-15 Mortality in bees. In Portugal, the bee mortality rate is 14.8%, on a scale that ranges from 3.5% in Lithuania to 33.6% in Belgium, according to a study by the European monitoring programme which covered 17 Member States (seasonal data collected in 2012 and 2013). 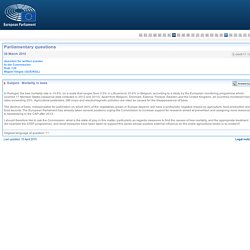 Apart from Belgium, Denmark, Estonia, Finland, Sweden and the United Kingdom, all countries monitored have rates exceeding 20%. Agricultural pesticides, GM crops and electromagnetic pollution are cited as causes for the disappearance of bees. The decline of bees, indispensable for pollination on which 84% of the vegetables grown in Europe depend, will have a profoundly negative impact on agriculture, food production and food security. The European Parliament has already taken several positions urging the Commission to increase support for research aimed at prevention and assigning more resources to beekeeping in the CAP after 2013.

PARLEMENT EUROPEEN 12/06/13 BIBLIOTHEQUE DU PARLEMENT - Les abeilles dans l'UE: un bilan de santé inquiétant. PARLEMENT EUROPEEN - Réponse à question E-000077-13 Bee health and the European Food Safety Authority's new guidance document. The European Food Safety Authority is reviewing data requirements for testing the safety of plant protection products with regard to bees. The protection of bees from pesticides is of utmost importance, alongside ensuring that farmers have access to an adequate toolbox to protect their crops from pests, weeds and diseases, enabling them to meet the challenges of feeding an increasing population and to protect natural resources (including land). In accordance with Regulation (EC) No 1107/2009, testing requirements for pesticides must be updated in the light of current scientific knowledge, including as regards chronic and sub‐lethal effects on bees. 1. 2.