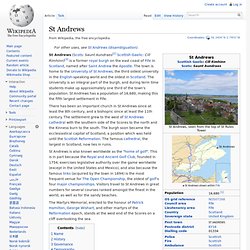 St Andrews Feature Page on Undiscovered Scotland. Browser Population. St Andrews And Surrounding Area. St Andrews is a charming and historic town that attracts visitors from all over the world. 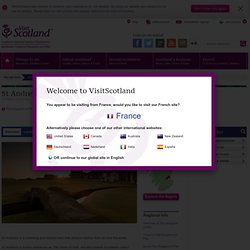 St Andrews is known worldwide as The Home of Golf, and also boasts Scotland's oldest university. The St Andrews Royal and Ancient Golf Club first met here in the spiritual home of golf in 1754, though it was first played here as early as the 15th century. The Old Course, which you can play, is most famous of the town's eight championship courses, and has played host to some of the world’s finest golfers at the British Open Championship over the years. St Andrews University, founded in 1410, dominates the centre of town. The elegant, ivy-clad buildings and delightful quadrangles and gardens have seen a procession of famous graduates such as Prince William. The official visitor gateway to St Andrews, Scotland. St Andrews – Travel guides at Wikivoyage. St Andrews St Andrews Castle The Royal Burgh of St Andrews is a small town (population 18,000) in the kingdom of Fife on the east coast of Scotland, facing the North Sea, and hosting the oldest university in Scotland. 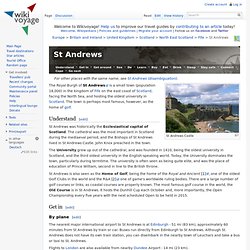 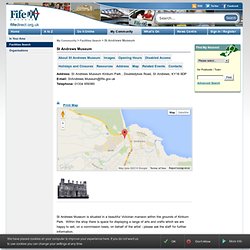 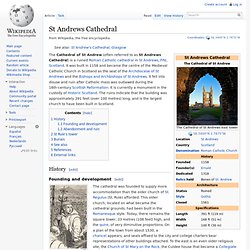 It was built in 1158 and became the centre of the Medieval Catholic Church in Scotland as the seat of the Archdiocese of St Andrews and the Bishops and Archbishops of St Andrews. It fell into disuse and ruin after Catholic mass was outlawed during the 16th-century Scottish Reformation. It is currently a monument in the custody of Historic Scotland. The ruins indicate that the building was approximately 391 feet (over 100 metres) long, and is the largest church to have been built in Scotland. History[edit] Founding and development[edit] Work began on the new cathedral in 1158 and continued for over a century. A fire partly destroyed the building in 1378; restoration and further embellishment were completed in 1440.

Greyfriar (Franciscan) and Blackfriar (Dominican) friars had properties in the town by the late 15th century and possibly as late as 1518.

St Andrews Castle. Ruins of St Andrews castle The castle's grounds are now maintained by Historic Scotland, and are entered through a visitor centre with displays on its history. 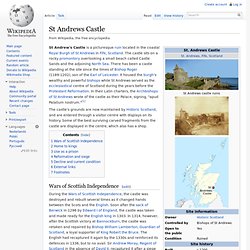 Some of the best surviving carved fragments from the castle are displayed in the centre, which also has a shop. St Andrews Castle Tour Information. Last Updated on Sunday, 04 August 2013 11:37. 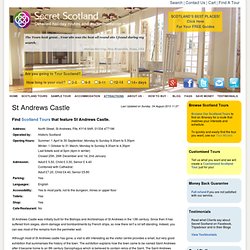 St Andrews Castle Feature Page on Undiscovered Scotland. An essential part of any tour of St Andrews is a visit to the ruin of its once mighty castle. 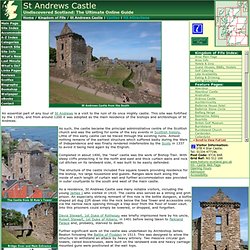 This site was fortified by the 1100s, and from around 1200 it was adopted as the main residence of the bishops and archbishops of St Andrews. As such, the castle became the principal administrative centre of the Scottish church and was the setting for some of the key events in Scottish history. Little of this early castle can be traced through the existing ruins. Almost nothing remains of the earliest structure which suffered badly during the Wars of Independence and was finally rendered indefensible by the Scots in 1337 to avoid it being held again by the English. 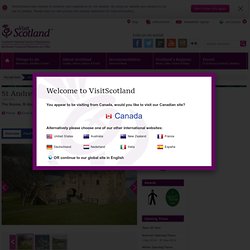 On a headland to the north of St Andrews stand the ruins of the city's castle, the main residence of the bishops and archbishops of St Andrews and the focal point of the church in medieval Scotland. Explore the underground 16th-century siege mine and counter-mine, and the 'bottle dungeon', one of the most infamous castle prisons in medieval Britain, which was cut out of the solid rock. John Knox and George Wishart may have been imprisoned in this dank and airless space, and this is where its believed Cardinal Beaton’s body was kept when he was murdered in 1546. There is a visitor centre, with wheelchair access, and a display with multi-sensory aspects for visitors with visual impairments.

There is no access to the bottle dungeon, mines or upper floors of the castle for visitors using wheelchairs or with limited mobility. ST ANDREWS CASTLE Property Detail. St Andrews Castle. The site on which St Andrews Castle stands has been fortified since the 1100's and was adopted as the chief residence of the bishops and archbishops of St Andrews by 1200, becoming the principal administrative centre of the Scottish Church. 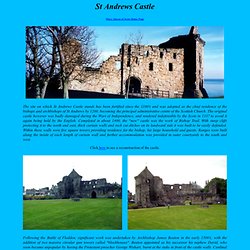 The original castle however was badly damaged during the Wars of Independence, and rendered indefensible by the Scots in 1337 to avoid it again being held by the English. Completed in about 1400, the "new" castle was the work of Bishop Trail. With steep cliffs protecting it to the north and east, thick curtain walls and rock cut ditches on its landward side it was built to be easily defended. Within these walls were five square towers providing residence for the bishop, his large household and guests.

Academia and research[edit] Educators[edit] Professors and researchers[edit] William Dunbar. William Dunbar (born 1459 or 1460) was a Scottish makar poet active in the late fifteenth century and the early sixteenth century. He was closely associated with the court of King James IV of Scotland[1] and produced a large body of work in Scots distinguished by its great variation in themes and literary styles. He was probably a native of East Lothian, as assumed from a satirical reference in the Flyting of Dunbar and Kennedie where it is also hinted that he was a member of the noble house of Dunbar.[2][3] His surname is often written as Dumbar. Biography[edit] Dunbar first appears in the historical record in 1474 as a new student or determinant of the Faculty of Arts at the University of St Andrews.[4][5] Since the customary age for entering a Scottish university at this time was fourteen, a birth-date of 1459 or 1460 has been assumed.

The last reliable reference to Dunbar is in the Treasurer's Accounts for May 1513[1] where he is recorded receiving a payment of his pensioun. William Dunbar. Gavin Douglas. Gavin Douglas (c. 1474 – September 1522) was a Scottish bishop, makar and translator. Although he had an important political career, it is for his poetry that he is now chiefly remembered. Gavin Douglas. John Knox. John Knox. James Graham, 1st Marquess of Montrose. James Graham, 1st Marquess of Montrose (25 October 1612 – 21 May 1650) was a Scottish nobleman and soldier, who initially joined the Covenanters in the Wars of the Three Kingdoms, but subsequently supported King Charles I as the English Civil War developed.

From 1644 to 1646, and again in 1650, he fought a civil war in Scotland on behalf of the King and is generally referred to in Scotland as simply "the Great Montrose". His "spectacular" victories, which took his opponents by surprise, are remembered in military history for their tactical brilliance.[1] Family and education[edit] James Graham, chief of Clan Graham, was the youngest of six children and the only son[2] of John Graham, 4th Earl of Montrose and Lady Margaret Ruthven.[3] His maternal grandparents were William Ruthven, 1st Earl of Gowrie, and Dorothea, a daughter of Henry Stewart, 1st Lord Methven and his second wife Janet Stewart.

Rev Thomas Chalmers. John Graham, 1st Viscount Dundee. John Graham of Claverhouse, 1st Viscount Dundee (c. 21 July 1648 – 27 July 1689), known as the 7th Laird of Claverhouse until raised to the viscountcy in 1688, was a Scottish soldier and nobleman, a Tory and an Episcopalian. James Graham, Marquis of Montrose. David Beaton. Career[edit] Politically, Beaton was preoccupied with the maintenance of the Franco-Scottish alliance, and opposing Anglophile political attitudes, which were associated with the clamour for Protestant reform in Scotland ('the whole pollution and plague of Anglican impiety' as he called it).

He was afraid that James V might follow Henry VIII's policy of appropriating monastic revenues. Relations became strained between James V and his uncle, Henry VIII of England, who sought to detach Scotland from its allegiance to the Holy See and bring it into subjection to himself. Cardinal David Beaton. George Buchanan. George Buchanan (February 1506 – 28 September 1582) was a Scottish historian and humanist scholar. Brown says that Buchanan was "the most profound intellectual sixteenth century Scotland produced. " His ideology of resistance to royal usurpation gained widespread acceptance during the Scottish Reformation. George Buchanan. Philosophers at St Andrews. Gavin Douglas. The Royal and Ancient Golf Club of St Andrews. The home of golf. St Andrews, Fife, Scotland. St-andrews-botanic.org. Craigtoun Country Park. Craigtoun Park.