Saint-Georges: Marie-Antoinette’s pop idol by Jessica Duchen pour THE INDEPENDENT. Published: 21 May 2007 Joseph Boulogne, the Chevalier de Saint-Georges, was nicknamed "the black Mozart", but he was a great deal more besides: an all-round celebrity, effectively a Pop Idol for the 18th century. 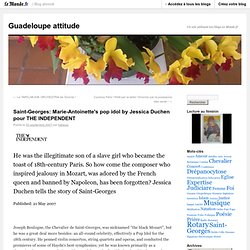 He penned violin concertos, string quartets and operas, and conducted the premieres of some of Haydn's best symphonies; yet he was known primarily as a champion fencer, a superlative athlete and, later, the first black colonel in the French National Guard after the Revolution. His influence extended from the pre-revolution French court to the anti-slavery movement in England. Next month at the City of London Festival there's a rare chance to sample his music in two concerts that unite the festival's themes for the year: the arts of France and the 200th anniversary of the parliamentary abolition of the slave trade. 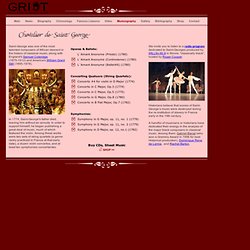 In 1774, Saint-George's father died, leaving him without an annuity. In order to support himself, he began publishing a great deal of music, much of which featured the violin. Editions, Product By Saint-Georges, Joseph Boulogne de.