Saint Mungo. St Kentigern/St Mungo. Much of St Mungo's early life is more legend than fact but he is said to have been the son of a pagan king of Gododdin, a part of Scotland now known as Lothian. 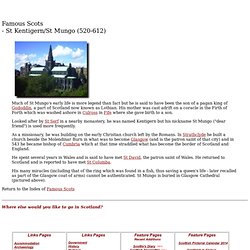 His mother was cast adrift on a coracle in the Firth of Forth which was washed ashore in Culross in Fife where she gave birth to a son. Looked after by St Serf in a nearby monastery, he was named Kentigern but his nickname St Mungo ("dear friend") is used more frequently. As a missionary, he was building on the early Christian church left by the Romans. Saint Mungo Feature Page on Undiscovered Scotland. Saint Mungo, also known as Saint Kentigern, Cantigernus or Cyndeyrn Garthwys, lived from 528 to 13 January 614. 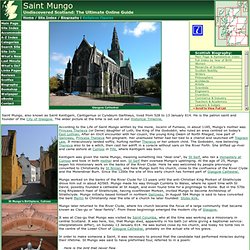 He is the patron saint and founder of the City of Glasgow. The wider picture at the time is set out in our Historical Timeline. According to the Life of Saint Mungo written by the monk, Jocelin of Furness, in about 1185, Mungo's mother was Princess Theneva (or Denw) daughter of Loth, the King of the Gododdin, who ruled an area centred on today's East Lothian. After an illicit encounter with her cousin, the young King Owain of North Rheged, now part of Galloway, Princess Theneva fell pregnant. Her unamused father had her tied to a chariot and launched off Traprain Law. Kentigern - Britons, Gaels, Picts and Vikings. It is said that Kentigern was the son of a Votadini princess (named Thaney, Thanew, Tanoch or Enoch) from Traprain Law. 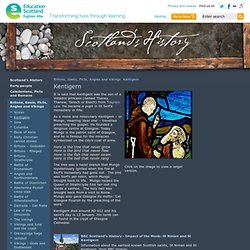 He became a pupil in St Serf’s monastery in Fife. As a monk and missionary Kentigern – or Mungo, meaning ‘dear one’ – travelled preaching the gospel. He founded a religious centre at Glasgow. A biography of Saint Kentigern or Mungo. St. 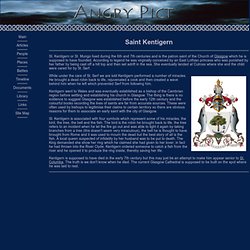 Kentigern or St. Mungo lived during the 6th and 7th centuries and is the patron saint of the Church of Glasgow which he is supposed to have founded. According to legend he was virginally conceived by an East Lothian princess who was punished by her father by being cast off a hill top and then set adrift in the sea. She eventually landed at Culross where she and the child were cared for by St. Serf. St Kentigern. Died: 612AD St Kentigern (or Mungo) is better known for his foundation which grew into the modern sprawl of Glasgow. 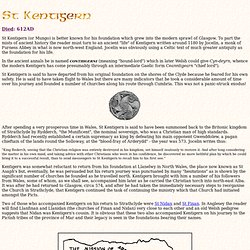 To part the mists of ancient history the reader must turn to an ancient "life" of Kentigern written around 1180 by Jocelin, a monk of Furness Abbey in what is now north-west England. Jocelin was obviously using a Celtic text of much greater antiquity as the foundation for his life. In the ancient annals he is named CONTHIGERNI (meaning "hound-lord") which in later Welsh could give Cyn-deyrn, whence the modern Kentigern has come presumably through an intermediate Gaelic form Ceanntigearn "chief lord"). RE:Quest: Saints in the Christian Church - Saint Kentigern. St Mungo. St Mungo was one of the most important characters in the Church in Britain in the 6th and early 7th centuries. 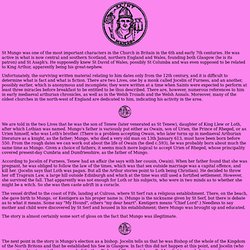 He was active in what is now central and southern Scotland, northern England and Wales, founding both Glasgow (he is its patron) and St Asaph's. He supposedly knew St David of Wales, possibly St Columba and was even supposed to be related to King Arthur, apparently being his great-nephew. Unfortunately, the surviving written material relating to him dates only from the 12th century, and it is difficult to determine what is fact and what is fiction. There are two Lives, one by a monk called Jocelin of Furness, and an another, possibly earlier, which is anonymous and incomplete; they were written at a time when Saints were expected to perform at least three miracles before breakfast to be entitled to be thus described.

There are, however, numerous references to him in early mediaeval arthurian chronicles, as well as in the Welsh Troiads and the Welsh Annals. Top. Kentigern of Glasgow. Saint Kentigern. IDLE SPECULATIONS: The Saint with Two Names: St Kentigern/St Mungo. Two images above: Tomb of St Kentigern [St Mungo] in The Cathedral of Glasgow Hoddom, near Lockerbie, Dumfriesshire: 300 metres from site of monastery of St Kentigern Reconstruction of Monastery at Hoddom Died c. 603-612; Farmer lists feast day as January 13. 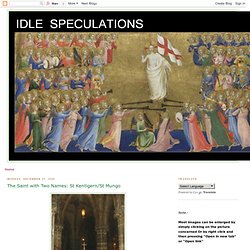 Most of what we know about Saint Kentigern mixes fact and fiction, because the only sources date from the 11th and 12th centuries. Many of the folkloric elements predate the written documents. Kentigern is said to have been a native of Lothian, the son of Saint Thenaw (Thaney, Thenog, Theneva), a British princess. He became a hermit at Glasghu (Glasgow) and was so renowned for his holiness that he was consecrated bishop of Strathclyde about 540 by an Irish bishop. It is further related that political disorder drove him into exile in Carlisle and then into Wales, where he is said to have stayed with Saint David at Menevia. Glasgow Cathedral. Glasgow Cathedral Property Detail. Head church of the diocese of Glasgow | The shrine of St Kentigern | A beacon of prayer | Reform and re-use Head church of the diocese of Glasgow Glasgow Cathedral stands majestically in the heart of Scotland’s largest city. 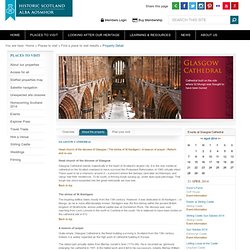 It is the only medieval cathedral on the Scottish mainland to have survived the Protestant Reformation of 1560 virtually intact. There used to be a chanonry around it – a precinct where the bishops (and later archbishops) and clergy had their residences. To its south, a thriving burgh sprang up, under episcopal patronage. The Coat of Arms. Glasgow is all set for the St Mungo Festival. This year's St Mungo Festival, celebrating the life of Glasgow’s patron saint, starts this week and involves a multi-cultural presentation of events across the city. 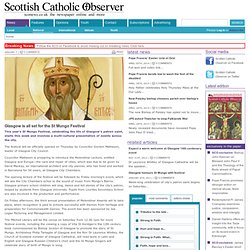 The festival will be officially opened on Thursday by Councillor Gordon Matheson, leader of Glasgow City Council. Councillor Matheson is preparing to introduce the Molendinar Lecture, entitled Glasgow and Europe—the care and repair of cities, which was due to be given by David Mackay, an international architect and city planner, who has lived and worked in Barcelona for 50 years, at Glasgow City Chambers. The Heroic Age: Kentigern and Gonothingernus.